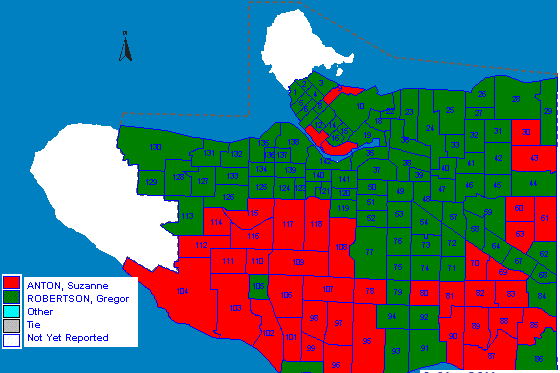 In 1991, I had the pleasure of running Darlene Marzari’s re-election campaign in Vancouver Point Grey. A pleasure because it was a fantastic campaign full of great people who worked hard to re-elect the best representative Point Grey ever had.

And it paid off. On election night, Darlene finished far ahead of the closest challenger, beating the BC Liberal by 13 points.

But that wasn’t the story the BC Liberals told a local newspaper. The weekend before the election, the Liberal campaign provided the paper with a poll that predicted a healthy BC Liberal win in Point Grey.

The poll was a fake of course. The Liberals had just scribbled the results they wanted on a piece of paper and handed it to the reporter. The reporter almost printed them, until I reminded him that I too could cough up a nice looking fake poll that said exactly what I wanted and offered to do so on the spot. My offer wasn't taken up, but the paper declined the Liberal’s as well.

This year’s civic election had its own stories of bad polls and ridiculous results.  In the dying days of the campaign, the Vancouver Sun published on its front page a notorious poll that missed the final result by double the margin of error. The NPA peddled the poll to the Sun and the Sun fell for it.

Here’s some advice for reporters and readers alike: if an interested party hands you a poll showing surprisingly good results in the last week of the campaign, run like hell because it’s pretty likely you’re being snookered.

That's just one of a number of instructive moments this civic campaign provided about polling.

For example, a few weeks before the NPA poll, a Sun headline proclaimed Mayor Robertson in trouble based on a poll by Forum Research. “Mayor Robertson vulnerable in next month's election: poll” said the Sun headline. Turned out he wasn’t. Vulnerable, that is.

How did Forum Research get it so wrong? The answer is that they didn’t, maybe.

What is true is that the Sun headline stretched the poll’s meaning well beyond the actual numbers. That’s because the poll never tested the actual match up between Robertson and his only real challenger, Suzanne Anton. In that real world match up, Robertson was very much not vulnerable at all.

The NPA and Forum polls were one offs. The civic polling most often featured in the media over the last year was conducted by Barb Justason of Justason Market Intelligence. And to her credit, Justason’s final poll -- covered by the Globe but not the Sun -- came closest to capturing the real strength of Robertson’s victory.

Sun reporter Jeff Lee, analyzing Justason’s penultimate poll two weeks out, said this about her findings: Justason found that “declining support for Vision itself, combined with a steady, even if not rising base for the NPA, shows there’s room for change on council,” leading Justason to question whether Vision could retain its majority on Council.

As we now know that prediction was about as wrong as you can get. Vision convincingly swept every seat it contested on council, school and park board.

How could Justason so underestimate Vision’s electoral power while, at the same time, capturing Mayor Robertson’s?

The answer is simple: the poll didn't take into account the way politics works in Vancouver, with its low voter turnout combined with an at-large electoral system dominated by parties and slates.

Justason’s polling pitched all the parties against each other, as if the election was a brand war, not a political battle with alliances and anomalies. Surprise, in Justason’s scenario Vision had a small lead over the NPA, with COPE trailing badly and the Greens doing surprisingly well.

Add to that the importance of name recognition and incumbency in an at-large system and you’ll understand why the NPA and Green candidates didn’t come close to wresting a majority away from Vision, as Justason suggested might happen.

Ask the average person about polling and you’ll probably get a string of expletives in reply. Normally I’d disagree. I believe polling is one of our great democratic tools, providing the average person with a rare voice in the process of electoral choice.

Unless it's used to confuse and mislead voters.

Unfortunately, this time around, no pollster got it close to right. And remember that next time some newspaper splashes a surprising poll across its front page.