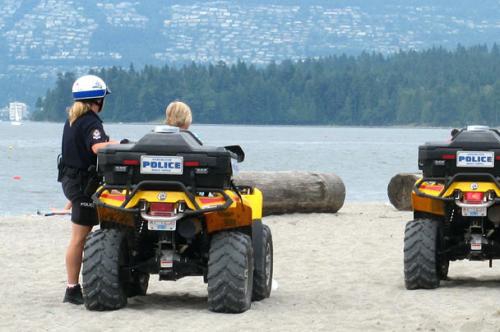 Thanks to a grant provided by the Vancouver Police Foundation, Vancouver Police will be patrolling the beaches on ATVs again this summer.  VPD Acting Inpsector Barry Kross recognized Executive Director Valerie MacLean and Trustees Murray Atherton and Susan Evans for the generous grant of $34,687.20 toward the lease of three ATVs to be used throughout the summer.

“Beach Patrol has proven in the past to be an effective policing model, assisting our officers in dealing with any crime or disorder on and around the beaches and adjacent parks during peak summer times,” says Kross.

In addition to the ATVs, officers will also patrol on foot, on bicycles and on horseback.  Increased patrols will span from Spanish Banks to Kitsilano Beach on the south side of English Bay, including the seawall along False Creek, from the Burrard Bridge to Stanley Park.

“Our main focus is to create a safe family atmosphere at the beaches and parks,” says Kross. “We’re asking people to come down to the beaches and enjoy themselves responsibly and to respect others around them.”

A man has been arrested a few hours after a hammer attack on a mechanic at Bayside Performance in the 8400 block of Fraser Street. The man, who was later identified as a former customer, entered a restricted access area and was confronted by one of the mechanics who asked him to leave and use the front customer entrance.

The man refused to do so and the two began to argue. Other staff heard the commotion and entered the garage to see what was happening.  Their attempts to intervene failed to calm the man, who called out for assistance from a friend waiting outside and he then grabbed a ball peen hammer from a counter.

He ran at the mechanic with the hammer raised. The mechanic put his hands up to block a blow to his head and was injured in the hand. Another employee ran at the man and grabbed the hammer away from him, while trying to keep the two men at bay.

The attacker and his friend both fled when 9-1-1 was called.  One of the men was later tracked and arrested around 5:00 p.m. near 37th and Victoria.  The second suspect is still unidentified.

After downtown stabbing this afternoon, police hunt for suspect

Police are currently looking for a 36 year old woman after a stabbing in downtown Vancouver this afternoon. Shortly before 1:00 pm, the suspect allegedly stabbed another woman near the corner of...
Vancouver ObserverJul 27th, 2013

The Integrated Riot Investigation Team (IRIT) is fulfilling its promise to charge 350 suspected rioters by the end of the summer. This morning, IRIT investigators announced that they have requested...
Vancouver Police DepartmentJul 23rd, 2013
Speak up about this article on Facebook or Twitter. Do this by liking Vancouver Observer on Facebook or following us @Vanobserver on Twitter. We'd love to hear from you.