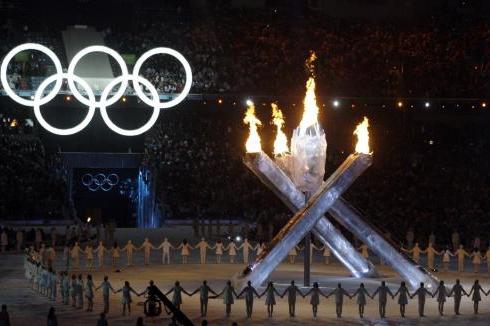 Three poles rose at the end of the ceremony, but a fourth failed to.

Despite an estimated 1500 protesters clogging traffic outside BC Place and the pall of an athlete's death,  the 2010  Winter Olympics  began with dazzling performances by a star-studded cast of Canadians last night. But the ceremony that the Wall Street Journal estimated to have cost around $40 million to produce ended on a sad note when there was a mechanical problem on stage that cast another shadow over Vancouver's Olympic flame.

"Four pillars were supposed to rise at angles from the stadium floor and surround the caldron. But after a delay of about three minutes, one pillar never rose," USA Today reported. k.d. lang, Sarah McLachlan, and Nikki Yanovsky all sang stunning solos. Yanovsky, a 15-year-old from Montreal, did the national anthem in English and French and a slam poet commissioned by the Canada tourist board to write a poem to capture the essence of the culture did a moving reading.

But the ceremony began with a video of Nodar Kumaritashvili who met his death yesterday on the Whistler Luge track.

"Was it the track that was made unreasonably fast and dangerous, all for the better entertainment of the fans? Was it the Canadian Olympics folks who banned other teams than Canada from practicing on the track before this week, so that Canada would be more likely to win?" wrote Howard Rotberg, author of Exploring Vancouverism: The Political Culture of Canada's Lotus Land in an email to editors earlier in the evening. His sentiments may have resonated with those of the fifty percent of Vancouver residents who voted against bringing the Olympics to the city, including those protesting cuts to social programs outside BC Place that night.

"Was it the gross negligence of the designers of the facility by having unprotected steel beams close to the most dangerous part of the track, without anyone bothering to put protective padding on the steel? Not exactly – we all killed him. We who let ourselves ...cheer on this $800 billion monstrosity."  Not everyone apparently agreed with Rotberg's view, as both inside and outside the stadium crowds waved Canadian flags and celebrated the event.  At Robson and Bute there were around a thousand people dancing in the street.

Inside the stadium, videos were the real star, videos depicting Canada's natural beauty, and in striking contrast to the celebration in Beijing that brought hundreds and hundreds of performers to the world stage, individualism. This performance celebrated the individual or band juxtaposed against a vast wilderness replete with wildlife, from the gorgeous representation of salmon spawning, moving up the four poles that were central to the stage, to the wind, the snow, the ocean, the rain and the stars that were also depicted. Through the power of symbolism, they captured the soul of the landscape and the spirit of the culture in installations as glimmering as the representation of the Northern Lights and a huge Spirit Bear that one observer noted "must have made Coca Cola happy."

Perhaps above all else, the ceremony attempted to make a statement about the place of First Nations people in Canada. It celebrated four First Nations bands that chose to participate in the event and the First Nations culture in general, putting it up front and central in the production as if to suggest a level of visibility in the mainstream culture that is what Canada hopes for, rather than what Canada is.

The First Nations theme ran through the entire production, but there was a near absence of a nod to the Asian culture that increasingly defines Canadian culture. And the Olympic flag-bearers at the end of the event were all white, causing some to ask why prominent Canadian environmentalist David Suzuki had not been chosen instead of movie star Donald Sutherland, who, despite the fact that he was born in Saint John, New Brunswick and his movie career spanning 50 years, and his Canadian roots, seemed more aligned with North America in general than Canada in particular and was unrepresentative of larger themes in the cultural consciousness.

Beautiful above all were moments when the dancers lifted off the ground and danced mid-air. This transcendence suggested that all things earthly can be overcome.

Of all the images contained in last night's performance, this image was the most poignant. If the Games are to be a vehicle that will elevate Canada's standing on the world stage, the event will need to transcend  much more than gravity in the coming weeks.

The mistakes of the Opening Ceremony seemed irrelevant after 14 gold medals, and tonight's Closing Ceremonies were about celebration and fun.
Linda Solomon WoodFeb 28th, 2010
Speak up about this article on Facebook or Twitter. Do this by liking Vancouver Observer on Facebook or following us @Vanobserver on Twitter. We'd love to hear from you.