"Vancouver's Olympics head for disaster," the headline in today's Guardian reads.  The story is equally grim and seems mostly true, although, as the person who sent me the link said, "he piled the adverbiage on pretty thick."  But compelling adverbiage it is...

"Two weeks before the games and with police officers on every corner, Vancouver is far from an Olympic wonderland," writes Douglas Haddow in today's Guardian.

"It's now two weeks until the start of the Vancouver 2010 Winter Olympic games, a city-defining event that is a decade in the making. But a decade is a very long time. Much of what seemed sensible in the early 2000s has proven to be the opposite: for instance, allowing investment bankers to pursue profits willy-nilly was acceptable when Vancouver won the bid in 2003, but is now viewed as idiotic. So it comes as no surprise that just days before the opening ceremony, Vancouver is gripped by dread. Not the typical attitude for a host city, but understandable when you consider that everything that could go wrong, is in the process of going wrong.

I was surprised to see the full page spread in the Vancouver Sun this weekend about the anti-Olympics movement and dissent in the city. It's the best article I've read in the Sun, maybe ever.  It was in-depth.  Very good reporting.  The photographs are night time shots, so even  Chris Shaw, who writes the "Olympics Retort" column for VO, and is  mild looking as heck, looks just a little sinister on the page.  If you didn't know him, you'd think he was Che with the revolutionary scarf, but Chris said, "I thought the Ward story pretty good."

Now to Vancouver Magazine Editor Gary Stephen Ross's elegant, honest, accurate, very beautiful Walrus Magazine cover story, "A Tale of Two Cities."  First of all, check out the March issue of Walrus on the newstand with its four different covers.  Yes, four different covers, with four different photographs by Grant Harder, each depicting a different Vancouver view.  Don't be satisfied reading Ross's prose online.   Ross's story is a  collector's item, perhaps the best collector's item yet to come out of the 2010 Games.  The lead, thanks to unusually well-crafted prose deftly pulls you into the cliched version of Vancouver, cliched and yet so close to being true. Literary nonfiction---the best I've come across--- about a city I love. 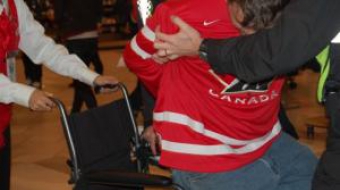 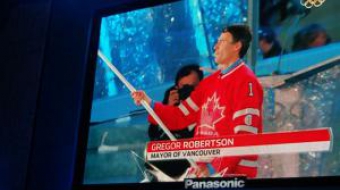 The mistakes of the Opening Ceremony seemed irrelevant after 14 gold medals, and tonight's Closing Ceremonies were about celebration and fun.
Linda Solomon WoodFeb 28th, 2010
Speak up about this article on Facebook or Twitter. Do this by liking Vancouver Observer on Facebook or following us @Vanobserver on Twitter. We'd love to hear from you.