Twitter can help Canadians stop the meter on internet use 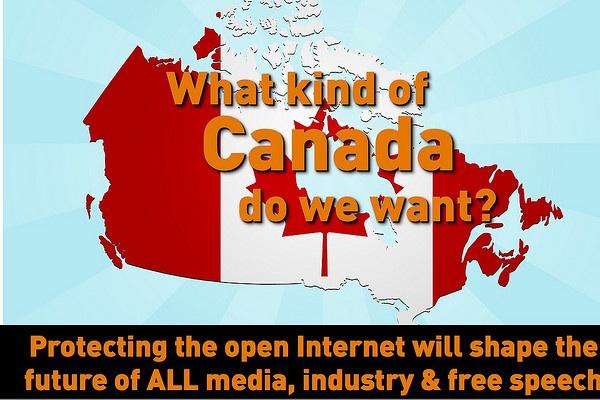 While researching this post online, I was streaming a movie via Netflix in the background—something that’ll cost me a lot more given Tuesday’s ruling by the Canadian Radio-television and Telecommunications Commission (CRTC).

He also argues that big telecommunications companies like Bell, Shaw and Rogers have a vested interest in curbing consumers’ access to on-demand services like Netflix and iTunes. These corporations also provide TV programming—a service that is increasingly obsolete when you consider that we can download, stream and view content whenever and wherever we want.

So how are Anderson and the dedicated crew at OpenMedia.ca campaigning for change?

They run a website where Canadians can call on decision-makers in Ottawa—namely, Industry Minister Tony Clement—to “stop the meter on Internet use.” Within 24 hours of launching the petition on Monday, November 1, 2010, over a thousand people signed. Three months later, over 107,000 have signed the petition.

Plus, citizens can tap Twitter and Facebook to spread awareness and prompt others to act. The Twitter version of the petition is organized through act.ly, a clever tool launched in June 2009 by Jim Gilliam and Jesse Haff who believe people can harness the power of Twitter to “tweet change.”

Like the web version, Minister Tony Clement is the target of OpenMedia.ca’s act.ly petition, meaning every tweet sent appears in his @Mentions stream. Close to 5,000 Twitter users have sent him the tweet, making it the top petition on the site at the moment and second over all time. 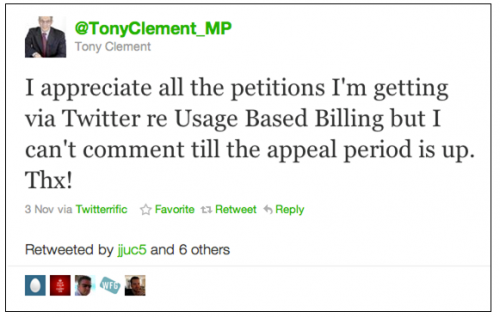 In spite of the outcry, the regulation has gone forward. But the movement continues to grow strength—a model of modern advocacy in a digital age. In this specific case, I admit there’s symmetry to using the Internet to safeguard access to the Internet.

Who would you @Reply to see change? Post or email me your suggestions!