As I venture into summer my year goes through a drastic change. I switch from the constantly working busy caterpillar to a relaxed social butterfly. This means sipping lattés at noon in the midday sun and meeting new people through friends or at different summer events I chose to attend. As I meet each person they ask the same familiar questions, “Who are you? What do you study?” and of course; “What do you do?”

The latter question brings my year into review. I work in high schools and community organization doing workshops on violence and discrimination across the province. I speak to classes ranging from grade threes all the way up to University students. And yes, it’s a tough yet rewarding job, thanks for asking.

In reflection I have a massive repertoire of stories from my adventures in the schools. They range from the stories that would make the more sensitive among us gasp to the stories that make you stand up and burst into song. Or maybe that’s just me; I’m very musical like that.

My mind jumps to one class where a boy in the room told me that if he ran into me outside of the schools he’d kill me. Now that statement could have been simply posturing to look tough for his friends or said out of pure fear at the dangerous creature known as the Homosexual; either way it send a chill down my spine and required me to make good use of the school’s counseling department. She shared with me that she wasn’t surprised by this particular boy’s reaction which was why she remained in the room for the workshop.

One thing I’ll be viciously grateful for is the councillors. Each school came with a team of committed councillors who understood the students and the classes and helped me integrate with the students effectively and in the event of anything happening in a class, even an off comment or two, they were ready to debrief with my after the class. It’s surprising that even a great workshop sometimes required debriefing the come down from the intense energy brought on by the students. Something new I learned over the year.
Not too long after I was informed informally by one of the vice principals that a parent had threatened to organize a protest in front of the school.

I responded with a hearty, “Great!” much to the surprise of the administrator. Why? Because a parent threatening to come to school means that his son or daughter went back home and talked about what he or she had learned in the workshop. The idea that I inspired heated conversations about discrimination outside of school and the classroom makes it all worthwhile.

I was actually done workshops at this school for the year so no protest came to be, but it was an interesting idea to entertain; walking through a picket line to school.

Without a doubt the students I teach get somewhat invested in the stories I tell. I walked into one class immediately recognizing several of the students in the class. The school had booked me for a group where I had seen all but two of them the year before. Their questions stemmed completely from my stories the previous year.

“Do you still have a boyfriend?”
“Have you gone anywhere new?”
“Have any exciting workshops happened?” “What’s changed since last year?” they ask eagerly.

I share with them everything I can.
Looking back I can’t imagine a more wonderful way to spend a year. Going into summer and planning for the year to come I can’t help but wonder what the new year will bring. What, if anything, will have changed with the new year of students? What new doors will open in the community? What avenues will be pursued to make changes? Only time will tell. For now, I get to enjoy a little sunshine.

Ryan Clayton is a facilitator based in Vancouver 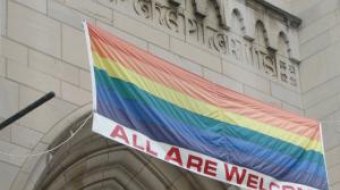 So you’re new in town and want to find out what’s hip and cool in the queer scene in Vancouver? Start by checking out Zoho Salon & Lock Shop (1708 East 4th Avenue, just off Commercial Drive...
Hilary MandelNov 4th, 2010
Speak up about this article on Facebook or Twitter. Do this by liking Vancouver Observer on Facebook or following us @Vanobserver on Twitter. We'd love to hear from you.