The prospects for Olympics violence has been in the news of late, in part prompted by comments made to the CBC by Gord Hill, a well-known anti-Olympic activist.  The story, in turn, triggered a response by the Integrated Security Unit’s (ISU) chief, Bud Mercer that his officers had to investigate people like Hill in order to ensure a “safe and secure Olympic Games” in February 2010.

Hill actually never endorsed violence per se which according to the Merriam-Webster on-line dictionary’s first entry is defined as “the exertion of physical force so as to injure or abuse (as in warfare effecting illegal entry into a house).”  In other words, acts of force directed against a human being.  The headline writers sexed up the story with a banner headline which read, “Anti-Olympic protester supports violent opposition.” What Hill actually did say, according to the quotes contained in the interview, was that he supported “direct action”, a term that can denote anything from banner drops to civil disobedience in its various forms. Civil disobedience, as the most casual perusal of our history will show, has been directly responsible for many of the civil rights we enjoy today.  Hill clearly stated that while he would never do so himself, he could understand why someone might want to blow up a power line in order to disrupt the Olympic Games.

Going back to our definition, was Hill condoning violence? The answer is no. His words might be taken to suggest sympathy for forms of vandalism or other criminal code violations, but a suggestion of violence against human beings was not present.  Hence the subsequent media frenzy was more the product of sloppy definitions, lazy journalism, and a potentially inflammatory story than any realizable threat to humans during the 2010 Olympic Games.

Indeed, I know of no examples where anti-Olympics protesters have ever hurt other human beings. The converse is not true and we need look no further than the documented behaviours of Mr. Mercer to see where the real threat of violence may lie.

Mercer, a former RCMP dog handler, has enjoyed a varied career during which he was involved in a number of events where violence was employed, notably by Mercer himself. The recent series of articles by Geoff Dembicki and Bob Mackin in the Tyee details three such incidents across British Columbia. In 1995, Mercer was at Gustafsen Lake where he was directly responsible for setting an explosive charge that destroyed a pick-up truck carrying two Native men. The men were not injured, but it certainly was not for lack of trying by Mercer and his team. The police snipers Mercer commanded then shot dead a dog belonging to the protest camp. Mercer’s own comments in the article about how much he loved his own police dog thus ring somewhat hollow.

In 1997, Mercer was involved in the notorious pepper spraying of demonstrators at the anti-APEC rally at the University of British Columbia.

In 2000, Mercer is alleged to have cut the support ropes for tree sitters conducting an environmental protest in the Elaho Valley.  According to one of those present, Dennis Zarelli, Mercer’s actions were deliberate and could have resulted in the deaths of those in the tree.  Criminal charges against Mercer were laid then later dropped by the Crown.  Mercer admits cutting the ropes but denies that any lives were at stake.

It all paints a disturbing picture of ISU’s top cop, a man charged with the safety of everyone in 2010, visitors, athletes, and protesters alike.  Indeed, the portrait that emerges is of a policeman who is very comfortable with violence against human beings.  His track record suggests he may be willing to use violence yet again against those he deems a problem, particularly who plan to protest the Olympic Games.

Putting a violent man in charge of thousands of security personnel, many extremely badly trained, does not bode well for how 2010 will unfold.

Mercer’s claim before Vancouver City Council during the summer that he was concerned about violent criminals descending on Vancouver for the Olympic Games might hold more truth than we suspected at the time, but not in the way he suggested.  Owning a red serge jacket doesn’t change history and a thug with badge to go with his Taser and gun is still a thug.

Maybe when Mercer sees violent criminals he is merely looking in the mirror? 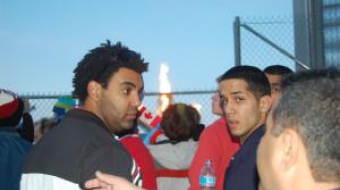 Eight Billion Dollars Got Canadians High on the Olympics. Was it Money Well Spent?

The costs of the Olympics were absurdly higher than VANOC or any level of government was ready to admit. The final number will come in north of $8 billion. How much north we may never know due to a r
Chris ShawMar 5th, 2010

I don't much like my country these days, indeed haven't for the last week or so.  Is it simply a case of me being an anti-Olympic no-fun grinch?  Maybe.   Or maybe it’s something else...
Chris ShawMar 2nd, 2010

Olympic Battle Rattle: The Rules of Engagement Have Already Been Written