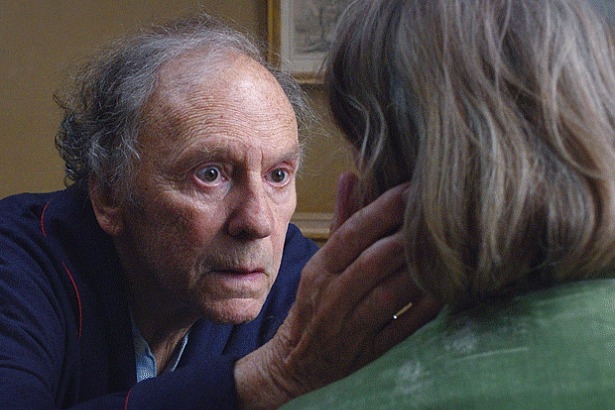 The big story at VIFF last night was word that the Granville street's Empire Theatre is closing in three weeks. It was once the movie jewel of the entertainment strip. It turned into what industry types call a “move over house”.

For VIFF, it’s a shock. The festival has got a year to find other venues but it will be hard to replace. Single movie houses are shutting down and International Village, a possible venue, is turning half its theatres into exclusive VIP venues.

A VIFF tweet last night assures the festival will go on.

This weekend for instance. I’ve got many fresh picks. I’ll group them into two categories.

AMOUR: I haven’t seen this one yet but I’ll recommend it anyway. I think that’s safe. It won the top prize at Cannes and got almost universal praise from the critics. Also, it’s by Michael Haneke of Austria who has put together a strong body of work noted for both his craft and his fondness for making us squirm with an emotional assault. By all accounts he’s eased up on that this time, focusing instead on love. Careful, though, the love he delineates is between two people who’ve grown old together and know they’re approaching death. Two acting legends from France play the couple. Emmanuelle Riva is the wife who’s health fails after she suffers a stroke.  Jean-Louis Trintignant plays the husband who finds himself helpless as she declines. There have been two main reactions: It’s said to be hard to watch because Haneke doesn’t spare us the uncomfortable details and it’s a work of art. (Screens Sat and Mon at the Vogue, which means the seats will be uncomfortable but there’ll be lots of them, and also Friday)

REBELLE: (In English: War Witch): This is the film Canada is submitting to the Oscars. Good choice. It’s already won awards at Tribeca and in Berlin. More germane: it’s a harrowing, well-made, well-acted film that you’ll remember for some time, if you can take the horrors it dramatizes. Right near the start, a young girl is pressured to shoot her parents. She’s been abducted and this is her initiation to become a child soldier. The ordeal so traumatizes her that she sees ghosts which, combined with an apparent ability to foresee army attacks, gets her labeled a witch and taken into the inner circle of the rebel leader The Great Tiger. 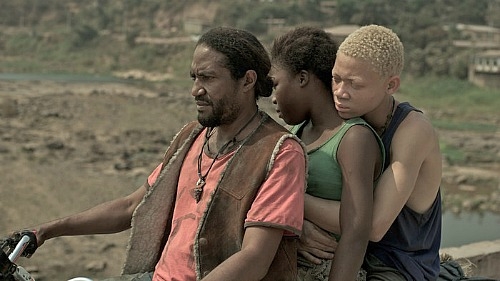 She’s also protected by an albino child soldier called The Magician. This mix of mystical and military is authentic judging by what we know about some of these rebel bands. Montreal filmmaker Kim Nguyen researched his subject and found a remarkable cast in The Congo, including 14-year-old Rachel Mwanza as his star. The film takes her through several changes in tone from hard gun battles, a visit to a tense village and a funny quest for a white rooster. Good. It varies repeatedly from grim to human. (Screens Sunday afternoon)

A ROYAL AFFAIR:  For a change of tone, how about this lavishly-presented historical drama from Denmark. It gives you intrigue in the royal court, battling political philosophies plus a bit of forbidden love. It’s entertaining and informative, at least for those of us who know little about Danish history. 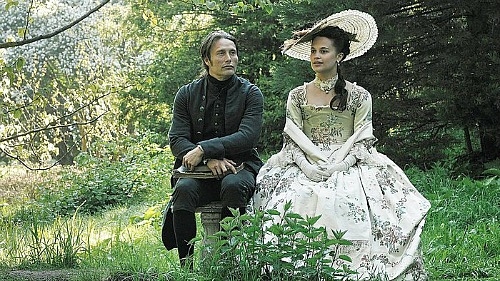 Mads Mikkelsen plays a doctor brought from Denmark’s colony in Germany to be personal physician to the king. He’s a believer in the new democractic ideas of writers like Rousseau. So is Caroline Mathilda (played by Alicia Vikander) a British princess brought over to marry the king, who isn’t much interested in them or her.  So of course, the doctor and the queen get together for horseback rides in the rain, to advocate social policy before the king’s conservative cabinet and for more personal pursuits. Excellent acting; beautiful costumes and sets and actual substantive ideas make this film definitely worth watching.  (Screens Sat and Tues)

RUST AND BONE: This one has been popular at two previous screenings and gets one more today.  Jacques Audiard of France, who last time gave us the tough prison drama A Prophet, now has an unlikely romance to show us. Marion Cotillard plays a whale trainer. Rising star from Belgium Matthias Schoenaerts plays a bareknuckle fighter and bouncer.  An accident that loses her both her legs up to the knees brings them together. The film artfully develops their relationship and her painful recovery from despair to embracing life again. It’s melodrama but of a high order, with excellent acting, humor and, yes, sex. The tale is from a book of short stories by Toronto writer Craig Davidson who is also a boxer and has worked at a marinepark. (Screens Sat afternoon)