Five years before he offended his less-bohemian neighbors by threatening their very shy son (not maliciously though). Now he invites him over to shoot a video blog of his run-on stories (“You just can’t find that kind of bar anymore”) to put on the internet as promotion for his book business. The boy comes out of his shell, the videos find an audience (65 hits the first three days) and we don’t learn what boost the business gets. It’s not a pressing matter for these people. They’re too occupied getting giggly drunk over ping pong or watching a movie in Spanish. That’s the charm of this good-vibe film. It’s about living casually, chilling out and going with the flow, and it’s finely crafted to achieve that effect.  Laura Colella wrote, directed, produced and shot it, as well as acting a secondary character in it. Plus, that’s her own house it was filmed in. (Screens Friday and Sunday)

REVISION: This carefully-assembled documentary is about racism, official lapses and a non-carriage of justice. It’s also about stretching the techniques of storytelling. The incident occurred in Germany   back in 1992. The country was unified once again and illegals were sneaking in across the border.  When two Romanian refugees were shot in a cornfield near the border with Poland, it was declared a hunting accident.  Philip Scheffner goes back to the scene, re-studies all the evidence (including the exact location where the bodies were found, with the firemen who had picked them up). 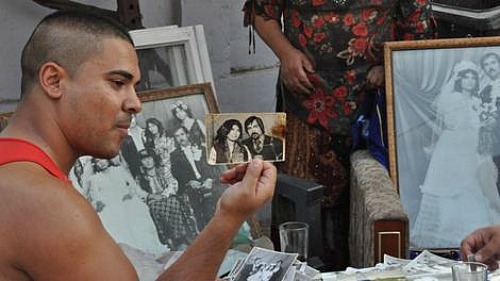 He visits family members in Romania to find out who the men were. Nobody had contacted them before. (Those scenes are novel in that we see them listening and reacting to their interviews being played back to them). In total we get a story of coverup, people declining to admit they did anything wrong back then and some suspicions that neo-Nazis had been at work. A fascinating and often tense, forensic exercise. (Screens Friday)

Two films from Mexico with different takes on the same subject …

AQUI Y ALLA: We get a lot of American films about Mexican immigrants, mostly illegals. This one shows the story from the other side of the border: the pressures that push people to run to the U.S. We get the picture through a man who’s come back. Pedro was in New York with a small musical career but obviously homesick. The reunion with his wife is uneasy (she feels he “had someone there”) and his two daughters laugh at the music he recorded. His efforts to form a new band don’t go well and the only job he can get, demolishing buildings, is short-term. People regularly ask if he’s going back to the U.S. Then his wife has a difficult birth requiring an expensive hospital stay and for him to replace or pay for the blood used. It’s melodramatic, and at the beginning exceedingly slow, but the film also develops a mood and through it a sympathetic portrait of a man’s struggles. There title means Here and There. (Screens Thurs., Mon. and next Friday)

THE COMPASS IS CARRIED BY THE DEAD MAN: This is a different angle on the lure the U.S. has on Mexicans. The tone here is absurdly comic and comes as a picaresque.  A teenager joins three others trying to get across the border, proceeds alone when he becomes separated from them and meets a number of eccentric characters on the way. A farmer gives him a ride on his wagon but dies holding that compass, essentially leaving the wagon directionless. 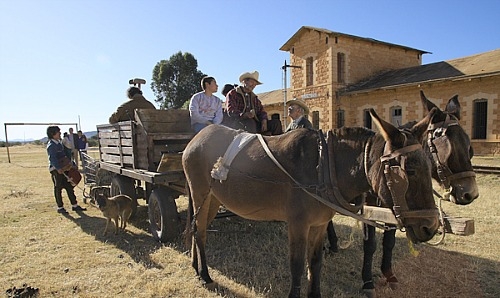 Others climb on. A group of women wailing at a funeral are professional mourners who’re only in it for the money. They ask if there’ll be funeral for the farmer. A young soldier accidentally kills his Comandante and joins the travelers who are now becoming a sizeable group. They stop in a town where a politician makes a fatuous speech in front of a new school. Incidents like these collect into surreal, weird and funny odd movie. (Screens Friday)