A city family moves to a country house and find a cemetery on their land where the area kids bury their pets. Beyond that, there’s an old native burial ground that’s closed off because whatever gets buried there comes back alive. Different though. The family cat is first and changes from gentle to a biter. Then, Ellie, the 8-year-old daughter, dies under a speeding oil truck. (Note to readers: yes that’s not as the novel has it but even the trailer gave away that change). The father (Jason Clark), a doctor and therefore supposedly rational, thinks she can be brought back too. A kindly neighbor (John Lithgow) had told him about it but also warned against it. Mom (Amy Seimetz) is too beleaguered by flashback memories of her sister’s death to get in the way and Ellie does return. A young actor named Jeté Laurence exudes sweetness and then mean anger in a strong performance. The novel discussed death and grief. The film does too, for a while, before resting on mild and run of the mill horror. (5th Avenue, Scotiabank, Marine Gateway and suburban theatres) 2 ½  out of 5

3 FACES: Jafar Panahi, the Iranian director who is not allowed to make films but manages to do them anyway, has another good one to savor. This time he and his wife Behnaz are in the lead playing basically themselves, a director and an actor. They receive a cell phone video of a young woman committing suicide but since it’s not clear if it actually happened or how it ended they drive out to the country to find out for themselves. 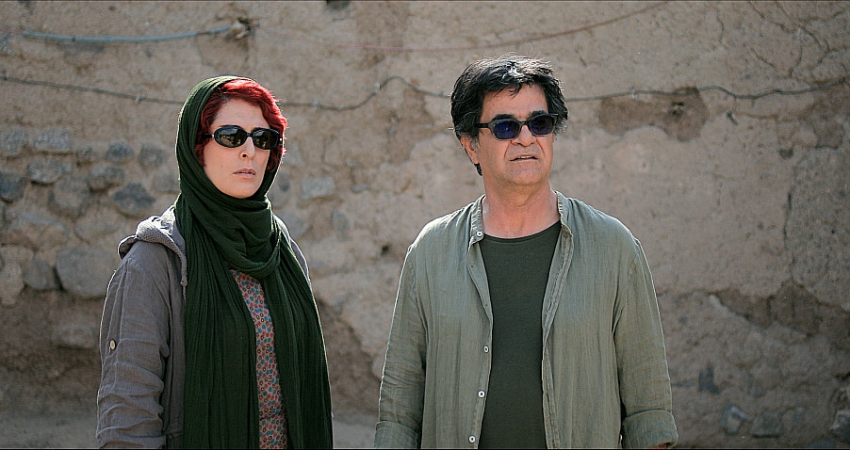 They do find the answer but along the way see and show us a great deal of what life is like in rural Iran. Tiny villages are neglected by the central government. The roads are sometimes country paths with only one lane that’s apt to be blocked by livestock or, in one scene, a dying bull. The society is fully patriarchal. Old men tell rambling stories about the need for strict rules. They forced the young woman to rebel and that made her family, and her whole village, lose face. It’s an intriguing portrait of the society, beautifully presented, both visually and in the dialogue, critical sometimes and in at least one sequence absurdly quaint. It’s a simple story but entirely captivating. It won a best screenplay award at Cannes.  (VanCity Theatre) 4 ½ out of 5

ARABY: No Arabs here. The title only pops up in a story somebody tells about a job that grows bigger than you expected. That tale, not the title, reflects the pessimism that oozes around in this affecting film from Brazil. “There are no miracles” one character says and the film piles on the evidence through one man’s quite ordinary life.

After he’s severely injured on the job at an industrial facility, we learn his story. A young man starts reading it as he had written it in a plain notebook. He had started it as an assignment in prison and continued even though he felt there was nothing special enough about him to write. The film finds quite a bit and shows it. Not extraordinary, but everyman and anyday. Various jobs as he wanders around, road building, truck driving, even renovating a brothel. Taking on worker’s rights sympathies at an exploitative tangerine orchard. Society has become “naked and raw” he realizes but “Get 1,000 little dogs together and the big dog starts to look small.” He ponders fate and bad luck and personal responsibility and has an on-off relationship with a woman.  “She’s the closest I ever had to a family,” he wrote.  It’s an authentic portrait of a man, a class and an entire society.  In subtitled Portuguese. (VanCity Theatre) 4 out of 5

CARMINE STREET GUITARS:  It’s a small store and workshop in New York, full of clutter and a noble mission. Guitar maker Rick Kelly is keeping ideals of craftsmanship alive in building his instruments by hand, usually out of old wood rescued from demolished buildings. We watch him sharing his thoughts about that and about his love of music with the diverse group of people who stop in to play and talk.