Star Trek is back for the fans; Mud intrigues like a classic; The Iceman chills 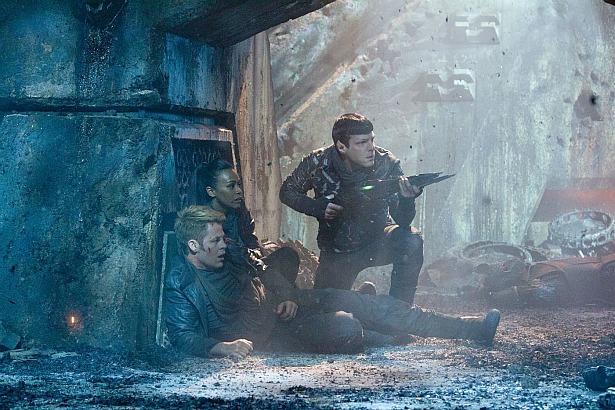 The young Mr. Spock and Capt. Kirk and their early adventures in the new Star Trek movie

This is a great week for new movies. At the top is big fan favorite, but right behind are several very good films. Not enough? Check out the Cinematheque’s website. They’re showing the famous and very violent revenge trilogy from Korea consisting of Lady Vengeance, Oldboy and Sympathy for Mr. Vengeance.

The new movies are …

STAR TREK INTO DARKNESS: J. J. Abrams has already received his praise (and big box office) for re-booting the long-running series four year ago with Star Trek. So, I’m marking him on what more he’s done this time? Mostly he has upped the action with elaborate set-pieces, including a spectacular starship crash and the demolition of much of downtown San Francisco. His big themes: scientific, not military missions, questioning your leaders, refusing certain orders and refraining from revenge, can hardly compete. The result is a movie that’s fun most of the way but eventually tiring. 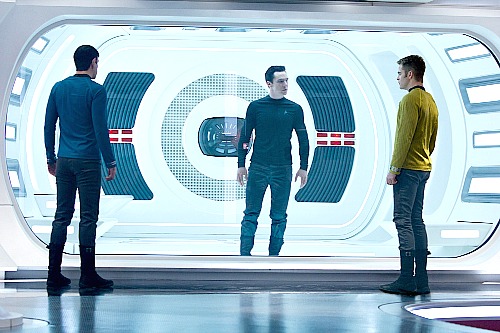 A big contribution to that is a new villain whose motives are murky at best. He’s a rogue Starfleet officer, well-played by Benedict Cumberbatch (the current Sherlock Holmes in England), but what exactly is he up to? Fans will appreciate that he echoes back to an old TV episode and a previous movie; ordinary viewers won’t much care.  But they might notice that the story he launches is fairly mundane for a big science fiction epic like this. The crew of the Starship Enterprise (Chris Pine as Cpt. Kirk, Zachary Quinto as Mr. Spock, Zoe Saldana as Uhura, Karl Urban as McCoy and Simon Pegg as Scotty) chase him to a Klingon planet and then down here to earth.

There’s pleasure in how the film and the actors depict the younger versions of these iconic characters. Pine shows subtle flashes of William Shatner;  Pegg  is Scotty all over again and Anton Yelchin out-kvetches Chekhov. Kirk and Spock verbally duel as usual and Trekkers will find references and inside jokes all through the film. The 3-D is unnecessary, some of the action is hard to follow and there’s more gunplay and fistfighting than you’d expect. Star Trek, after all, originated as an anti-military series.  (Scotiabank and many suburban theatres) 3 out of 5

MUD: This superb film is almost a Huckleberry Finn for our time. Consider:  two boys find a fugitive hiding on an island in a river in Arkansas and endeavor to help him get away. Gradually they learn his story and a great deal of home-spun philosophy about women, love and the responsibilities of men. 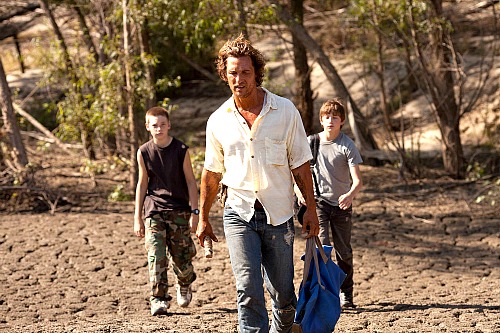 Matthew McConaughey, continuing his recent run of excellent performances, plays the man, nicknamed Mud. The boys (Tye Sheridan and Jacob Lofland) find him living in a boat that’s been stranded high in a tree after some flood. He sends them for food and to take a message to the man who raised him (Sam Shepard) and the woman he loves (Reese Witherspoon, playing sexy and slinky).

He’s killed a man because of her and bounty hunters are on his trail. One of the boys is particularly taken by the story of what a man will do for love because his own family is breaking up. Mom wants to leave and he and his dad would be forced to leave the way of life they’ve known on the river. The film deftly melds all these story strands into a rich meditation. The island is mythic and natural. In town is menacing and ultimately violent. Both environments get a genuine representation and my only complaint is minor.  The film is a bit too long. (5th Avenue, International Village and a couple of suburban theatres) 4 out of 5

THE ICEMAN: This is the most appropriate title of the week. It was a nickname applied to the lead character and the film about him is more than chilly. Richard Kuklinski was a hired killer for some New Jersey mobsters in the 1960s to the 80s and is said to have offed more than 100 people. He’s shown as both cold-blooded doing his work and as a devoted a family man, with a wife and two daughters who he seems to have loved and defended unconditionally. There’s a scene here in which he goes after a driver who insults his family after a minor car rear-ender. Michael Shannon plays him with psycho potential behind a taciturn, little-talk façade. 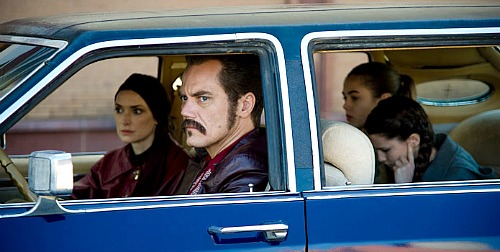