BECOMING REDWOOD:  Hippies, draft-dodgers, extradition on a drug charge. Yes, a real B.C. story told with charm and whimsy, an upbeat mood and a bright widescreen look. Writer-director Jesse James Miller said at a screening this week that there’s much of his own story early on—he’s a son of draft dodgers—but it veered off into something fanciful. 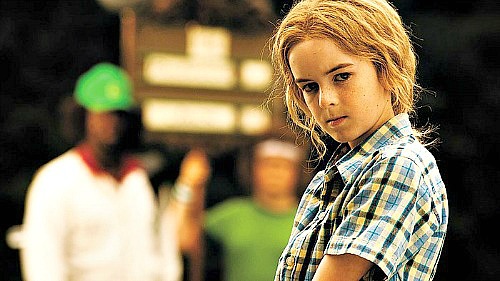 A young boy, engagingly-played by Ryan Grantham, retreats from his problems into a fantasy about golf. (The director played professionally for a while).  At the very moment his parents are splitting up (at the Canadian border) he hears a radio story about Jack Nicklaus. That stokes his imagination about beating him in a dramatic showdown at the Masters. (Co-incidentally, this year’s tournament is on right now). Circumstances send him back to California though, to live with his mother, her militaristic husband and two sons, and down in the basement, a crazy grandfather from whom he learns the real secret to golf. There are slow spots and a few too-cute scenes but generally the film is amiable, poignant and well-acted. Notice especially the good work by Scott Hylands as the old man. (International Village) 3 out of 5

REVOLUTION: Rob Stewart got awards and audiences for his 2006 documentary Sharkwater but also a challenging question. Why protect sharks when in a few decades all fish will be gone anyway? We see him fumbling for an answer in this new film and then setting out to find one.  What he shows with spectacular underwater images and accounts by marine biologists is disturbing. The oceans are getting sick with acidification, the coral reefs are dying, large fish are giving way to jellyfish. 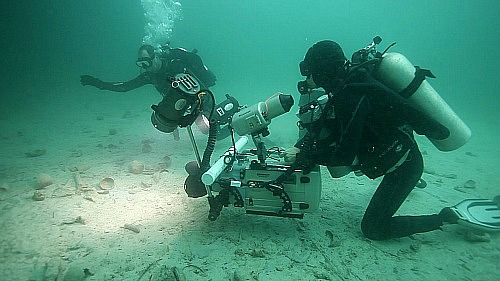 Then he goes further. It’s not just the oceans, it’s the whole planet that’s in trouble. He visits lemurs in Madgascar; lynx in the north, scenes of de-forestation and the Alberta tar sands for an urgent statement of how all life is connected and how climate change is threatening it. He brings in a stellar cast of experts including Lester Brown of the Worldwatch Institute and  B.C. types  Andrew Weaver, Tzeporah Berman and Patrick Moore. There are worrying references to the five mass extinctions that have already happened on this planet. More passionate than gloomy, it was voted the most popular environmental feature at the Vancouver film festival last fall.  (International Village and suburban theatres)  4 ½ out of 5

PARIS-MANHATTAN: It’s not just Woody Allen and Hollywood who dream of Paris as a magical city of love and lights. Here’s a very similar vision from a French writer-director named Sophie Lellouche, making her first full-length film. It seems there’s a lot of herself in this story of a woman so taken by the films of Woody Allen that she hears his voice spouting well-known lines from a giant poster in her apartment and lets her life be guided by his comments. He later appears in a short cameo which makes this film important for Woody completists. Others will find it a meandering romantic comedy about her work as a pharmacist, the pressures put on her to find a husband and a relationship she is slow to acknowledge with a security system installer. Alice Taglioni and Patrick Bruel play the couple. The film isn’t fizzy enough; merely frothy.  (5th Avenue) 2 ½  out of 5

RENOIR: A second French film this week (also at the 5th) has another popular trait of the national cinema: a love of sylvan glades, stippled by sunlight and flower petals floating through the warm air. In that setting we watch two generations of Renoirs and the woman who stirred them both. 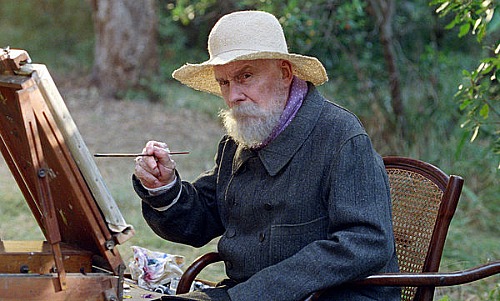 Pierre-Auguste, played by film veteran Michel Bouquet, is the famous painter, crusty, demanding, suffering arthritic hands but still able to enjoy how the skin of his newest model ((Crista Theret) catches the light. We see a lot of her and she also manages to charm the painter’s son, Jean, the future film director played by Vincent Rottiers. He’s just returned from the war with an injury-the time is 1915-and agonizes whether he’s shirking his duty, all the while romancing her.  Dad, a cold man most of the time, endorses, in his paintings at least, pleasant and cheerful feelings. And that’s about the level of thinking in this pleasant but flimsy film. The strongest drama is at the very end; an on-screen script tells us that when Jean went on to make movies, the model became his star and wife but was apparently dumped later on and poor and forgotten when she died. That sounds like a movie. (5th Avenue) 3 out of 5

SCARY MOVIE 5: If you’re wondering why this series has chosen now to parody the Abnormal Activity films, it’s because this episode has been years in the making. The story has security cameras catching evidence of a demon menacing a sleeping baby. The main point of interest is that both Charlie Sheen and Lindsay Lohan, as well as Snoop Dogg and Mike Tyson, make an appearance in the film. How? Can’t tell. The studio didn’t show it to critics and only managed to get it into suburban theatres. Neither is a good sign.