It’s a true story, written by the son of one of them and originally staged as a play. The girls enter a talent contest, lose (because they’re Aboriginals) but are discovered by a piano player portrayed by Chris O'Dowd. He switches their repertoire from country (too whiney) to soul (determined and striving).  He tells the assertive leader (Deborah Mailman) to sing backup and let the one with the best voice (Jessica Mauboy) sing lead. She does an extra vibrant version of the old Stax hit “What a Man”.  In Vietnam, the girls find romance and develop confidence. This is all played out against a backdrop of Australia’s official policies towards Aboriginals, the impact upon them of Martin Luther King’s assassination and, of course, the war which occasionally intrudes.  A very enjoyable film. (5th Avenue Cinemas)  3 ½ out of 5

TRANCE: There comes a time in this new film from Danny Boyle that so many improbabilities have come along that you may not know what’s going on anymore.  Add in what appear to be dreams, recaptured memories, or delusions flashing forward, or sometimes backward and you’re bound to feel lost. Don’t worry. The film will explain itself, not with anything too surprising but with enough to satisfy. Meanwhile just flow with the dazzling visual treats and mysterious atmosphere Boyle (of Slumdog Millionaire and Trainspotting fame) trots out.

James McAvoy plays a London auction house employee who helps a thief (Vincent Cassel) steal  a Goya painting (Witches in the Air, which actually hangs in The Prado in Spain) but gets bonked on the head and can’t remember where he hid it. Maybe a hypnotherapist (Rosario Dawson) can dislodge the memory. She draws out vision after vision but which ones are real? He’s hit by a car. The woman driver shows up in a separate memory.  Sometimes the hypnotist is the driver. On it goes. The hypnotist clues into what’s really going on and demands a share of the action, should she ever find it. It’s an entertaining  puzzler. (International Village and a couple of suburban theatres)  3 out of 5

UPSTREAM COLOR:  Here’s a puzzler that doesn’t explain itself at all. You’ll just have to find your way through the oddities, obscurities and ellipses and maybe discover the theme the writer-director intends to impart: how we’re nudged along by unseen forces. At the centre there’s a romance, between a woman (Amy Seimetz), who seems to work in an art dealership, and a man who chats her up on the subway. He’s played by Shane Carruth, the writer, director, producer, editor, composer and distributor of this perplexing film. She’s been infused with some kind of maggot that a gardener dug out of the soil and it may be a cure later when a pig farmer imparts some kind of transference of life elements with his animals. Or maybe not. The gardener also steals her money and the farmer also records sound effects and plays them like natural music.  The film liberally quotes Thoreau’s spiritual insights from his book Walden.  The dreamy tone and back and forth editing are often eerie and disorienting but also intriguing.  Best not to try and figure it out but to just go along with it, and discuss it later.  (Vancity Theatre)  3 out of 5

PICTURE DAY:  Here’s a view of youth today that remarkable for two things. Hollywood rarely gets them both right. First is authenticity. The high schoolers in this story think and talk like real teenagers. Second, Tatiana Maslany’s performance as the defiant student Claire, sharp-tongued, ever sure she’s right, is astounding. No wonder she won the best actor award at Whistler and the film won the Borsos prize as best Canadian feature. 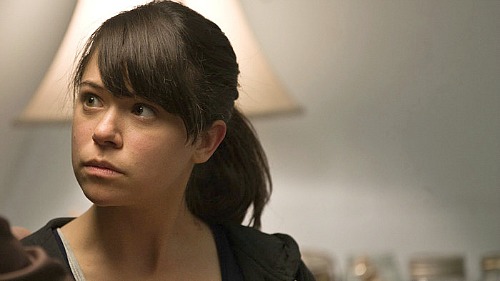 Claire, having to repeat her last year of high school, gets involved with both a 34-year-old rock musician (Steven McCarthy) and a kid just arrived in Grade 9 (Spencer Van Wyck) who she used to babysit.  A sort of triangle develops as she makes it her mission to remake his nerdy image into a stud with blue hair and charisma but keeps on sleeping with the rocker. There’s disappointment on a road trip though and recurring conflicts with the school principal. And lots of great dialogue (ranging from warm and chatty to argumentative) with everybody. Director Kate Melville use to write for DeGrassi and has made a film that’s low on plot but high on believable characters. (VanCity) 4 out of 5