She’s a sure 10 but she’s also a tease who wants to make him over. That would include cutting out the, well you know, going to night school and meeting her friends.  There’s a great scene when she comes to dinner at his parents’ place and tries to upgrade his earthy and excitable father (a very funny turn by Tony Danza). She’s into controlling.  It takes an older woman (Julianne Moore) with issues of her own to show Joseph what his problem really is. She’s supposed to be a far more real person in his life, although a she’s bit sketchy to us. Still this is a funny and sweet movie with good performances and an ending that comes on fast but satisfies. (Scotiabank and many suburban theatres)  3 ½ out of 5

METALLICA THROUGH THE NEVER: I guess ever since MTV came along you can’t just put a band on the screen and expect the audience to watch. Along with a concert you need pictures. So when this San Francisco heavy metal band gets going with their best known songs, a young roadie, played by Dane Dehaan, is sent across town to find a tour truck that’s run out of gas and bring back a mysterious leather bag. He’s carrying a gas can as he makes his way through the streets, an odyssey that becomes more perilous and surreal as he goes. He’s hit by a van at one point; falls into water and then finds himself between demonstrators and cops as a riot starts up. A masked rider on horseback chases him. Buildings collapse into rubble. 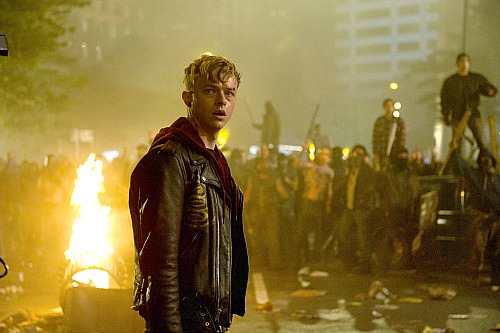 All this was filmed here in Vancouver; the music at Rogers Arena (although B.C. Place is passed off as the exterior) and the riot on 12th Avenue near the hospital. (I hope they were quiet). The music is just as loud and bombastic as I expected, but recorded clear and sharp. You have to wait quite a while for the band best song, Nothing Else Matters, one of the few that starts easy before building into a tirade. The show is a good digest of their hits for the fans and a good introduction for newbies. It’s boosted to a gigantic size on the IMAX screen, which lets you see singer James Hetfield sing and growl up close while Lars Ulrich thrashes on the drums behind. It’s an epic show. The 3-D doesn’t add anything though. (Riverport) 3 out of 5

CLOUDY WITH A CHANCE OF MEATBALLS 2: I always approach sequels with trepidation … and hope. Can they do it again? Good question after the first film four years ago was such a spirited and inventive joy. Well, sadly, this one disappoints. You constantly feel that the filmmakers were trying hard. The casual insanity of the first is buried.  Great animation skills bring a visual dazzle but also a procession of trite ideas inside an ever-more frantic story.

Remember that machine Flint Lockwood (voiced by Bill Hader) invented to produce food? Remember it ran wild and produced a food storm? Well, in this sequel it turns out that the machine survived and has turned Flint’s hometown island, Swallow Falls, into a Lost World or Jurassic Park populated by food animals, banana creatures, pickle men and worst of all, giant ravenous cheeseburgers. A shady industrialist (Will Forte) hires Flint to help clean the island up, but is really after the machine. Anna Faris is along again as Sam Sparks the TV meteorologist. She joins the group as they take an eerie trip into the jungle, which is greatly enhanced by some very good 3-D. The pictures are delightful, the story is trite and oddly full of references way over children’s heads. The slapstick action will keep them amused but I was struck at the preview that laughed only occasionally. It’s an adult kids film. Expect crowds though. (International Village, Dunbar and many suburban theatres)  2 ½ out of 5

NOTE: All images movie stills provided by the studios. They are the exclusive property of their copyright owners.