Riddick’s dour action and Something in the Air’s radical nostalgia: reviews 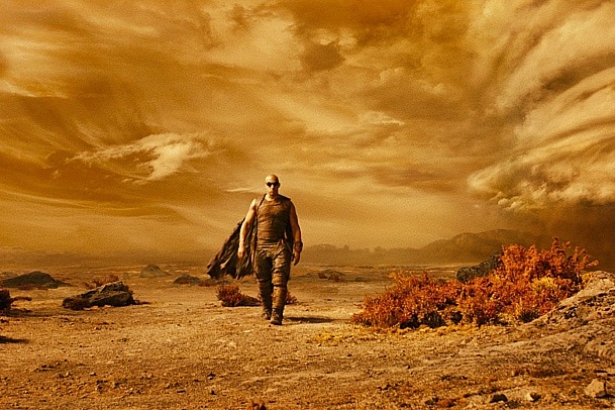 Actually there is another Hollywood man carrying the banner this week: our own Seth Rogen. His apocalyptic party This Is The End has been re-released less than three months after it first came around.  Rogen, writing with his long-time pal Evan Goldberg, and accompanied by his Montreal pal Jay Baruchel, goes to party at James Franco’s house the very night the end really does come nigh. Many vulgar laughs and outrageous celebrity antics happen.

Something in the Air:  3

RIDDICK: After all that pounding and blasting we had to endure in this summer’s blockbusters, how nice it is to get a lean, single-purpose adventure; just one man against whatever comes his way. Alright, it’s only Vin Diesel who shows zero emotional range in his acting but does compensate with a believable stance as a pug who’ll do anything to survive. That includes fighting off animals that look like hyenas and water creatures that act like Loch Ness monsters. And eluding two groups of mercenaries who arrive in space ships and compete with each other to catch him. 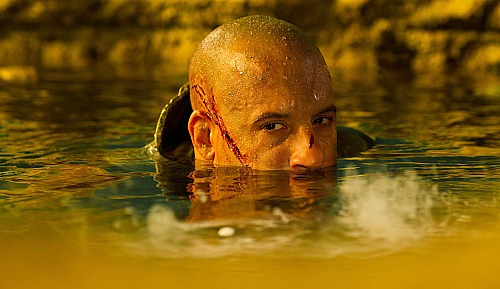 Vin, as Richard B. Riddick, is stranded on a remote planet. A brief flashback shows how he got there to satisfy those who remember that in the last film, The Chronicles of Riddick, he ended up as a sort of chief sitting on a throne. You don’t really need any back story though because this turns into a survival endurance test. Simple; no complications, at times repeating ideas from Pitch Black, which started the series. Often it dwells on pain (a metal screw in the leg?) and a couple of times it’s shockingly gory (a machete to a head?). It’s one long cat-and-mouse sequence as Riddick tries to get control of one of the ships so that he can escape. The action sequences are well-staged which helps distract from the cheesy look of the planet backgrounds. The acting is comic-book level, as is the whole film. (Scotiabank and suburban theatres everywhere) 2 out of 5

SOMETHING IN THE AIR: Erstwhile student radicals will enjoy this one, the early parts anyway. The scene is France a few years after 1968 and students are demonstrating in the streets again. There are spirited encounters with the police and a lot of heads being clubbed. 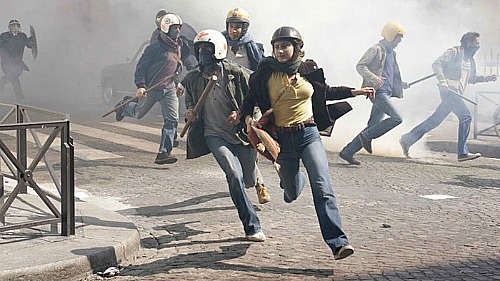 Later there are meetings with endless debates about theory and even including the usual aggressive proclamations by the Trotskyites.  Director Olivier Assayas was there when he was young and has re-created the mood and look of the time perfectly. His partly-autobiographical story is about a high school student (Clément Metayer) who gets involved in the movement when it is not clear where it is going. Or where his life is going. A lot of leafleting and bits of vandalism aren’t a revolution. Anyway, his interests are more in art, especially cinema and he has to defend them when he meets a girl with a definite radical commitment (Lola Créton). She’s in a filmmaking collective and concerned with issues like “bourgeois syntax.”   It’s an evocative snapshot of a time in history and an age in one young man’s life. What’s missing, amid all the nostalgia, is a clear statement of what it means. The film comes to a mushy no-decision. (VanCity Theatre) 3 out of 5

COMPUTER CHESS: Every once in a while something original like this comes along. You have to celebrate it, even when, as in this case, it’s also weird and close to bizarre. For a while I couldn’t tell whether this was a documentary or not, perhaps like Wordplay, the film about a crossword puzzle tournament. Here it’s a competition by computer programmers. They gather in a modest hotel once a year and play their chess programs off against each other and then stage a finale: the winning program plays chess against a human being, the man who hosts the event. It could have happened. The film looks like it was shot back in the 80s, almost all in black and white and the computers are actual machines from the era. 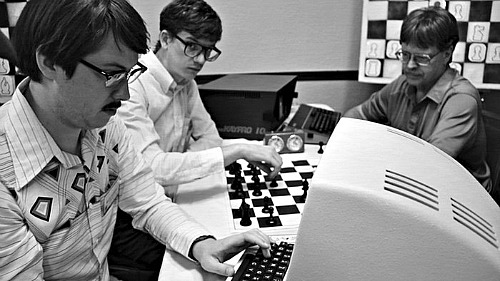 Gradually, bits of oddity prick the illusion. One competitor is too arrogant and with no room booked for him constantly searching for a place to sleep. Last year’s winning program, now said to be even better, develops a glitch. Its nerdy programmer is stumped while his sponsor barks “Everything is not everything.” Meanwhile, a new age encounter group is also in the hotel and occasionally interacts with the chess geeks. All in all, it’s a clever, sometimes meandering  construct by Andrew Bujalski, one of the original mumblecore directors. He made Funny Ha Ha. Here his message is get up and face life. The event host is played by Gerald Peary, who writes and teaches about film in the U.S. and has also done some programming for the Vancouver International Film Festival.  (VanCity Theatre) 3 ½ out of 5

ADORE: When Doris Lessing wrote the story she called it “The Grandmothers". This film version has also been called “Two Mothers” (at Sundance) and “Perfect Mothers” (in Europe). Actually, these women are cougars; they sleep with each other’s grown sons. There’s something creepy about that. French director Anne Fontaine sees it as a unique love story, an expression of female desire. It comes off on screen as bright, sunny, emotional, well-acted and ... tawdry. 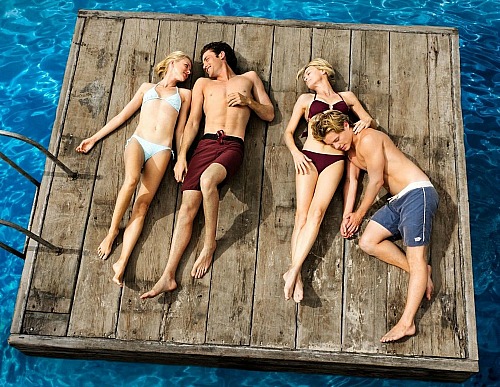 Naomi Watts as Lil and Robin Wright as Roz live in a lakeside paradise in Australia’s New South Wales. They’ve been best friends since they were little. Lil is a widow and lonely; Roz’s husband is off to Sydney to check out a job offer. Their sons (Ben Mendelsohn and Xavier Samuel) are also best friends and gamboling in the water and on the beach appear to Roz as “beautiful. Like young gods.” Well, one thing leads to another and some rapturous sex scenes ensue. Eventually each couple finds out what the other’s been doing and some soul-searching takes place. The film doesn’t condemn though. It accepts that these women are trying to hold on to their youth through this fantasy. For us, it causes squirming and more than a few laughs. (5th Avenue) 2 ½ out of 5