MENORCA: “It’s really hard to stay sharp at anything when you’re stuck at home.” So does the frustrated mother in this film echo what a lot of women have felt. “Kids soccer practice is the worst,” she says and then does the logical but uncommon thing: she drives away, picks up a hitchhiker and has sex with him. She ends up at a rural strip bar fascinated by the power the women there seem to have over their own lives.

Seems like faulty logic but with almost comatose old-timers in the audience and a very game Tammy Gillis playing lead, the film develops a cryptic, mesmerizing attraction. It’s got a David Lynch vibe at times and a nonsensical sub-plot (trying to return a stone to Spain, yes Menorca, for her son’s benefit. Ok, the runaway mother has doubts about what she’s doing but I didn’t think John Barnard’s script (he also directed) got much further than light entertainment in examining them. The movie is fun and spirited but thin. It was filmed in Winnipeg and Spain. (VanCity Sat.--with Tammy Gillis in attendance-- and Thurs.) 2 ½  out of 5

The other Canadian films they’re showing are:

The Gardener which takes you on a visit to a world-famous but hardly ever open to the public garden called Les Quatre Vents. It screens Fri, Sat, Tues and Thurs.

Drone, a suspense film about an IT operator who starts questioning his work. He kills terrorists long-distance by piloting drones. BC plays Washington and India plays Pakistan. It screens tonight at 8:40 and gets a general release in June.

Sensitive Parts, a Vancouver film that explores through comedy and drama how about current relationships and be sabotaged by past histories. Mon and Tues with the director, Brendan Prost, in attendance.

And unrelated to those, there’s yet another Canadian in town.

PERFUME WAR: By rights I should be criticizing this documentary as unfocussed. But life often does throw diverse story lines together like this. It’s fascinating to follow all these and find yourself in some unexpected places. Originally it doesn’t look so great, somewhat confusing in fact. But stay the course. Barb Stegemann, originally from Nova Scotia tells her story and incidentally reveals what a determined woman she is. 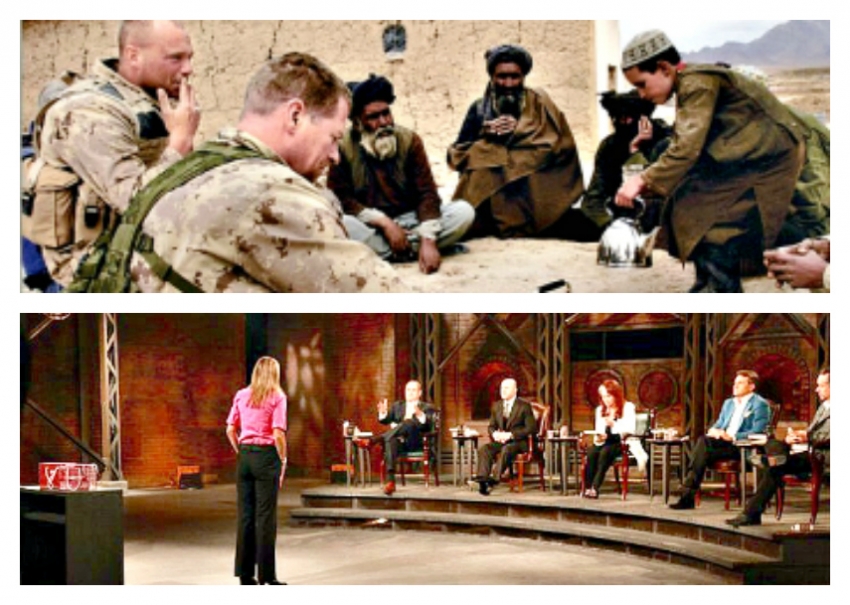 Her best friend was seriously injured as a Canadian soldier in Afghanistan . She, recalling that he was “a natural protector who had written a book about Vancouver’s missing women, was motivated to do something. Incredibly that became a small business selling perfume and thereby encouraging an alternative to opium production by Afghan farmers. She buys essential oils from them.  To get her product into stores she went to CBC’s Dragon’s Den to ask for support and got it (except for Kevin O’Leary who didn’t see a profit potential). And it keeps going. She went on to Rwanda and Haiti to buy oils, self-published a book and sprinkled this film with quotes from the Roman Emperor Marcus Aurelius. (“People exist for the sake of one another”). There’s a sidetrip discussion of patriarchy. Meanwhile, her friend’s rehabilitation at Simon Fraser University is detailed. See? Unfocussed. But a fine story anyway. (Park Theatre) 3  out of 5

And there’s one for the season too …

STRANGERS ON THE EARTH: Perfect for Easter time is this hike along the Camino, the ancient pilgrim route across northern Spain. Here’s part of what Rod Mickleburgh,  who’s been there, wrote for me when the film played at VIFF.

Director Tristan Cook’s beautifully-filmed documentary seeks to capture the essence of the increasingly-popular journey and what drives so many to endure blisters and pain to complete it.  The film follows the footsteps of American concert cellist Dane Johansen, who back-packed his bulky instrument to record a series of concerts along the way. The soundtrack featuring Bach’s Cello Suites played by Johansen, as the landscape rolls by, is a highlight. 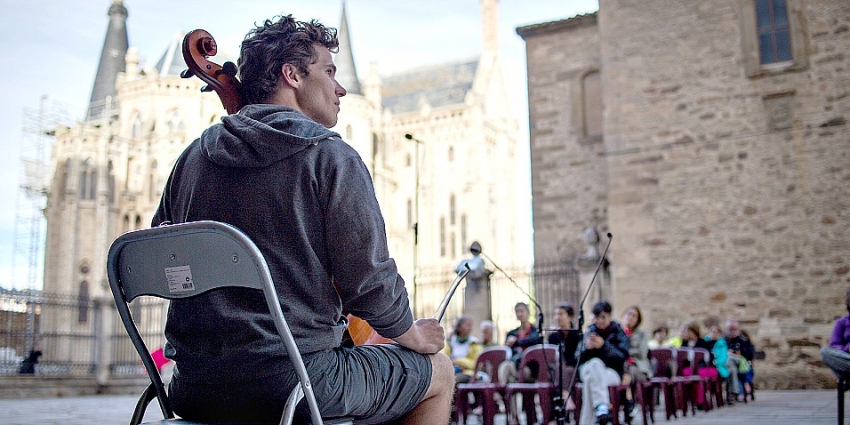 The focus bounces back and forth too much between Johansen and others on the Camino, with no consistent story line. But rewards are many, besides the scenery. Touching moments, profound observations by a number of pilgrims and some surprisingly honest conclusions make Strangers on Earth a satisfying depiction of this incomparable land voyage. I can’t wait to go back. (VanCity Theatre) 3 out of 5