The color scheme is almost all grey, with a few dull greens and a rare flash of blue sky outside. That’s her world and slowly the film reveals her paranoia. She’s convinced Rodin is trying to have her poisoned and his associates have robbed her. Doctors won’t tell her why she’s there, she says, and her family has abandoned her.  One grain of hope--her brother Paul is coming to visit--sustains her.  The film switches to him on his way. He prays at length, tells a priest about his conversion to Christian “obedience” and finally arrives to meet Camille. It’s a deeply emotional scene, as is much of the film which delves into delusions of grandeur, heartless but well-meaning systems and tiny signs of compassion. Bruno Dumont, the director, boosted the realism by casting real mental patients for a few of the small roles. I wish he had told us more about Paul, an author, world-traveller and diplomat. (VanCity Theatre) 3 out of 5

L’AVVENTURA: No, it’s not new, it’s 53 years old. The print is new though, and restored and the film deserves to be here because of its key place in cinema history. It’s often cited as one of the best films ever made. It made Monica Vitti a star and Michelangelo Antonioni a world-famous director. And it’s credited with changing the language of movies. Story no longer needed to be primary; character, mood, context could carry a film. That can and has been abused. Not here though.

The slim story has a group of idle rich take a boat cruise to a rocky island where one, a moody about-to- be-married woman, disappears. Neither the others or the police can find her and only her fiance Sandro (played by Gabriele Ferzetti) and her best friend Claudia (Monica Vitti) keep searching. While they do, he comes on to her and she strives to resist—for a while. As he puts it, “It’s better to look at things the way they are.” A study in ennui, empty lives and drifting motivations. Some find it slow but watching it again just this week I found there’s always something going on in the story, to the characters or in the masterful visual compositions, to keep you engaged.  (The Cinematheque) 4 out of 5

Playing in tandem with another art house classic: Nostalghia, which the Russian director Andrei Tarkovky made in Italy’s Tuscany region in 1983. Check the website theCinematheque.ca for more.

ESCAPE PLAN: Another film with the old guys. (In a couple of weeks four others will be off carousing in Las Vegas.) Here it’s Sylvester Stallone and Arnold Schwarzenegger, both in good form, doing their 1980s action thing.  Sly grunts as usual.  Arnie has more of the fun. He even has a long rant in German and watch his eyes go all squinty when he’s handed a machine gun. It all happens in a prison. Yes this film is stocked full with improbabilities and it requires a big reveal at the end to explain what’s really going on. 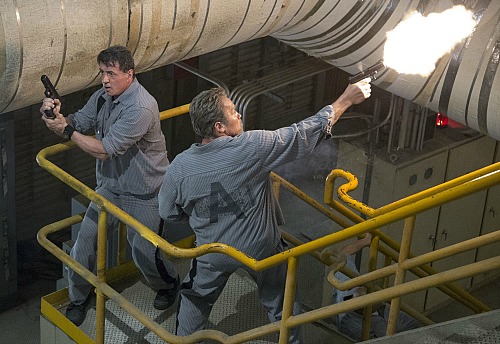 This we do know: Sly plays a man who tests prison security. He gets put in and breaks out. He’s done that 14 times. (Only in the movies).  The CIA hires him to test their new “redaction site” which replaced those infamous “black” sites. Once inside, he teams up with Arnie and briefly a Muslim inmate to plan another escape.  It’s not that straightforward though; the story gets tortured with complications and needs a rescue in a long, quite preposterous action sequence. Fans gets what they came for. (International Village and many suburban theatres) 2 ½ out of 5

COTTAGE COUNTRY:  Horror-comedy fans will be hoping for another Tucker & Dale vs Evil as they sit through the mediocre beginnings of this one. Tyler Labine stars again and the film does improve as it goes on but don’t expect a blood-fest. Expect dry humor and ironic tension as two people try to cover up their crimes. 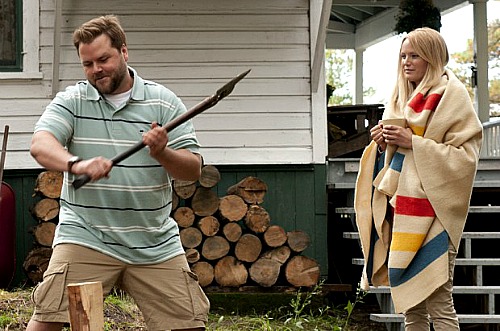 Labine and Malin Ackerman prove to be bumbling conspirators, which sets up most of the fun. He’s about to propose marriage in Ontario’s cottage country when his annoying brother barges in with a Euro-trash girlfriend. A request to leave, an argument and an axe-accident later, they have a body to dismember and dump in the lake and a woman to kill and bury. Thinks get worse. The brother’s friends show up to party, including a Torah divinity student who asks inconvenient questions. Tyler, playing fearful, and Malin, ever more assertive, are very funny. The movie overall is only so so, done in by unwelcome choices like hallucinations of the dead brother as a zombie.  (Only at the Guildford in Surrey) 2 out of 5

CARRIE: No previews for this one. That’s usually a bad sign. The studio wants a few bucks from the audience before they get wise. Well, we’ll see how director Kimberly Peirce and her star Chloë Grace Moretz do with the role that Sissy Spacek turned into a horror classic 27 years ago. Carrie who has telekinetic powers, is kept as an outsider by her fanatically religious mom (Julianne Moore) but gets both a drenching of blood and revenge at the high school prom. It’s one of the movies’ most iconic scenes, for teens anyway. From a Stephen King novel which also wielded a sequel, a TV movie and a Broadway musical.  (Scotiabank and many suburban theatres)

NOTE: All images are movie stills provided by the studios or producers. They are the exclusive property of their copyright owners.