Mads, who is slow to take it all seriously, is shunned by his friends, banned from the local grocery store and roughed up. The police are called in and he’s arrested. This film grabs you and lays it on pretty thick as it details every step showing exactly how suspicions run wild and meager evidence grows into a net-like trap. Worse, it shows how a herd mentality blocks out reason. Mikkelsen won the best actor award at Cannes for his performance and 5-year old Wedderkopp is absolutely natural as his not quite accuser. This is a very good film. (5th Avenue Cinemas) 4 out of 5

THE ACT OF KILLING:  The banality of evil is unveiled to bizarre effect in this astounding documentary. Your jaw will drop as you watch it. You’ll think, “This can’t be real.”  But it is. Texan Joshua Oppenheimer went to Indonesia to hear about the slaughter of Communists and ethnic-Chinese that followed an attempted coup back in 1965. Some one million people died. He couldn’t get survivors to talk, they’re still too scared, so he asked some of the perpetrators. They had no qualms; they were happy to talk and demonstrate. A wire pulled hard around a neck works best, apparently. What they did next is pure surrealism: they re-enacted their killings to make a movie. 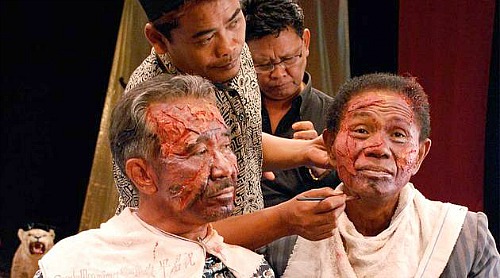 They’re as enthusiastic as kids putting on a show when they do make up, don costumes (one in drag), stage musical numbers and show off their interrogation and killing techniques. They direct a crowd to show more energy when they chant “Kill them, Kill them”, and when they proudly show the film to their families and young children they receive respect in return. Louts and gangsters back then, heroes today, although one, originally among the most enthusiastic, with 1,000 kills to his credit, comes to view things differently in a traumatic catharsis. The film avoids the politics of the time to focus on universal themes, which prove disturbing.  (The VanCity Theatre is showing both a short and a long version. Their  website http://www.viff.org/theatre has the details) 4 ½  out of 5

SIGHTSEERS: This British film is a black comedy, that won’t have you laughing very much but does resonate in this summer travel season. It features the kind of self-absorbed folks you run into now and then, blithely moving along without purpose and causing ill without another thought. Alice Lowe and  Steve Oram, a couple of TV actors, wrote it and, under the direction of Dennis Wheatley, star as a couple touring the high spots of northern England, like a pencil museum, Fountains Hall and a tramway museum. 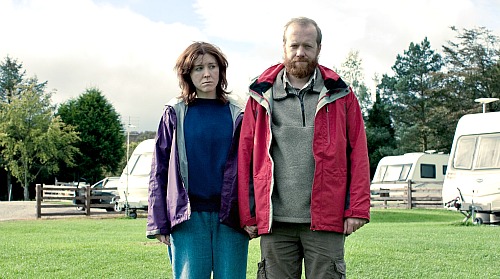 She’s a mousey woman taking a break from her overbearing mum and he, her new boyfriend, imagines he’s a deep thinker and a considerate man. He tries to get a litterbug to pick up after himself and later accidentally backs his camper trailer over him but feels no regret. Other annoying people get pushed off cliffs as the couple open up to be more assertive while remaining thoughtlessly unaware. They banter and argue, laugh and fall deeper in love and the film views them with a mixture of sympathy and condescension.  I can’t imagine it’s a true portrait of modern England, as some claim, but it is oddly endearing.  (VanCity Theatre)  3 out of 5

ONLY GOD FORGIVES:  This film is so languid in pace and so beautiful to the eye that you’ll feel like you’re in a trance much of the way. Some ingested substances may add to the experience and keep the boredom away. The story, set in Bangkok, Thailand, can sure use the help. Ryan Gosling stars and Nicolas Winding Refn directs, (their second collaboration after Drive two years ago) in a tale of another existential loner. This time he’s also opaque. He hardly speaks, preferring to gaze and think and remain passive. He’s tested though when his brother kills a young prostitute, and is killed in turn by her father, and his mother (Kristin Scott Thomas) demands he hunt down the killer. That sets off a cycle of revenge and a slowly-revealed but under-developed  oedipal psycho drama.