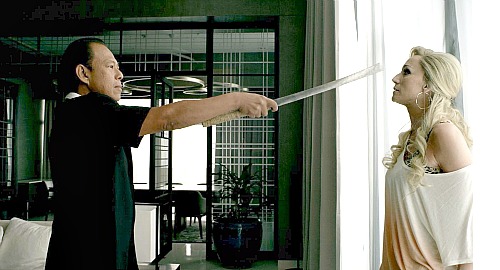 Local hoods, cops and a particularly vicious semi-retired cop (played with cool efficiency, a sharp sword and interludes of karaoke singing by Vithaya Pansringarm) get involved and the violence spurts and spirals. That got it booed at Cannes but you should key on the oddities in the story, the visuals and the surreal atmosphere as well as Kristin Scott Thomas, more strident and brassy than we’ve ever seen her before. (Rio Theatre)  3  out of 5 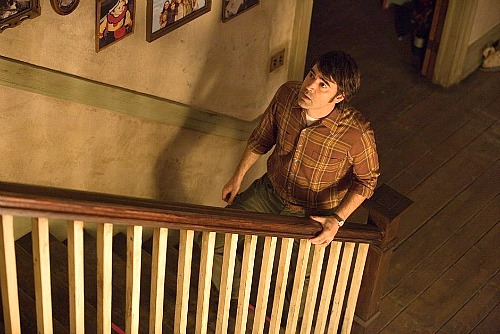 Here, Ron Livingston and Lili Taylor are newly-moved-in with their five kids when the creaks and thumps start, clocks stop at precisely 3:07 in the morning, and hidden entrances are revealed into a basement and a crawlspace behind a cupboard. The tension builds slowly and potently and whether you believe it or not (apparently a belief in God and the devil is something of a requisite) you’ll recall times when you were nervous about looking under the bed or checking out that sound outside the door. The tingles, scares and startles are nicely modulated, although an amateur exorcism goes a bit over the top. (International Village and suburban theatres) 3 out of 5

R.I.P.D.:  Here’s a real timewaster. It’s reasonably entertaining, in a dumb way, but also terribly derivative. The story is a near copy of Men in Black, with cops searching not for space aliens among us, but dead people who keep on being active. The cops are dead too. Hey it gets more strange than that and awfully muddled.

Ryan Reynolds plays a Boston cop who’s killed on the job by his partner (Kevin Bacon) and ends up in sort of a pre-purgatory where Mary-Louise Parker drinks Fresca and recruits him into a special squad. They’re all dead lawmen charged with finding those near-dead down here on earth. His new partner is a Buffalo Bill type played with scenery-chewing relish by Jeff Bridges. He’s an Oscar winner. What’s he doing here? And it gets stranger yet. A sinister plot is revealed drawing on something or other 3,000 years old to bring dead criminals back from a vortex in the sky. It comes from a comic book and is directed with a sprightly pace, cheap-looking special effects  and lots of real estate destruction in downtown Boston by Robert Schwentke. He made a hit out of another graphic novel, RED, but passed on the sequel to do this film. Good use of 3-D. (International Village and suburban theatres)  2 ½ out of 5

20 FEET FROM STARDOM: Not many people read the names of the musicians and singers on the records they listen to but most everybody who’s heard the Rolling Stones’ "Gimme Shelter" has noticed that woman’s voice vibrantly belting out “It’s just a shot away.” That’s Merry Clayton, who along with others, like Claudia Lennear, Judith Hill and Lisa Fischer, finally get some recognition in this documentary. Stars like Sting, Bruce Springsteen and Mick Jagger speak their praises while the film tells their personal stories, few of which are happy. Darlene Love, for instance, suffered the indignity of having other women lip-sync to her voice. Because of a scheduling conflict I haven’t seen the film yet but because I’ve heard so much good about it, I’m ready.  (5th Avenue Cinemas)