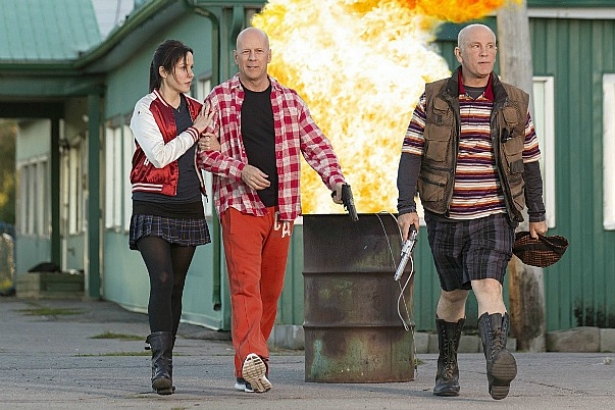 Many new titles this week, including an astounding re-creation of a dark history, a black comedy from England and three American films that should have been a lot funnier.

RED 2: This is how you mess up a sequel to a surprise hit. You put in more and then more again and feel confident that what you’re creating is even greater fun than the original. So, if Helen Mirren firing a gun was a novelty last time, have her fire more, out of both sides of a car at one point. Have her stunt drive so fast and with so many spinning turns it’s dazzling. Correction. Make that unbelievable. In other words, take everything beyond common sense. Compared to the first, this movie feels contrived.  Check out the last vision: John Malkovich with Carmen Miranda fruit on his head, for one example.

Bruce Willis as the ex- CIA guy classified as RED (Retired, Extremely Dangerous), can’t live a quiet life. An internet leak names him as part of an old Cold War black op that hid a nuclear device somewhere in Moscow.  He sets out to find it (with the help of Malkovich and Mary-Louise Parker) while both the Americans and the British want him dead. 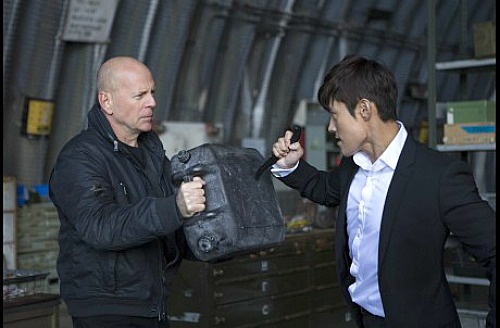 The Pentagon hires the world’s top contract killer (Korean actor Byung-hun Lee) and MI-6 hires an old friend, Mirren. The Russians fling an ex-lover  (Catherine Zeta-Jones) at him.  It gets crowded and there’s  ne more. Anthony Hopkins, as the man who designed the bomb, has to be sprung from a psychiatric prison and urged to remember.  The quest takes them right into the Kremlin, you know that place just across the plaza from a Papa John’s pizza? It’s no more secure than the White House, in the movies at least.  There and in the streets of Paris and London, in an Iranian embassy and on an airport runway we get gun battles, crashes and explosions but less coherent fun.  2 ½ out of 5

TURBO:  Dreamworks Animation managed to turn an ogre into a sympathetic character (Shrek) but can’t work similar miracles with this snail.  It’s just too much of a stretch that he could gain the speed of a race car (after getting doused with nitrous oxide) and compete in the Indy 500 against his hero, French-Canadian ace driver Guy Gagné. The film will delight some kids but bore most parents. It feels like a knock-off of Pixar’s Cars movies and you might do better to wait for their next one, Planes, coming in three weeks.

Turbo, voiced by Ryan Reynolds (he’s in two new movies this week), is a dreamer and while there’s a good message in encouraging kids to follow their dreams, wouldn’t it be better to offer something more attainable? Like not getting splattered by over-ripe tomatoes falling on them? There is better role modeling on display: Turbo avoids getting crushed by a kid riding a Big Wheel and he falls in with a couple of taco-hawking Latino brothers in California and helps revitalize a strip mall. Visually, the film is well made; it just lacks pizzaz and is over-stuffed with celebrity voices. Samuel L. Jackson and Paul Giamatti are fine but you hardly hear Snoop Dog, and do children care that the real Mario Andretti speaks two cameos?  (International Village and many suburban theatres)  2 ½ out of 5

THE HUNT: Here’s a gripping, riveting, angry story of a false charge of child abuse that nevertheless destroys a man’s career and turns his community against him. It’s from Denmark’s Thomas Vinterberg, who dealt with abuse before in The Celebration and now shows how innuendo can explode into a mess. A young girl (Annika Wedderkopp) inadvertently says her kindergarten teacher (Mads Mikkelsen) exposed himself to her. The head of the school believes her because children don’t lie and a counselor asks leading questions that only deepen the accusation, even when the girl tries to take it all back. 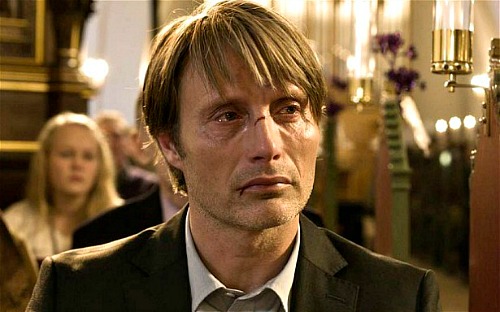