I’M BACK: It starts as an absurd comedy but soon devolves into an alarming caution about the rise of a new fascism in Italy. Mussolini magically re-appears. It’s as much a surprise to him as the people who see him, including the filmmaker who documents his presence. Mussolini is distressed by the many “Abyssinians” he sees on the street, plans to take over the country again and finds that TV is the most effective means. 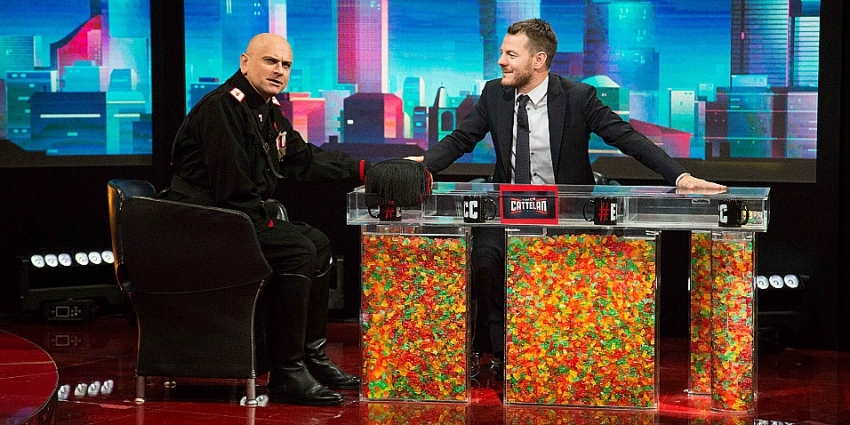 He becomes a star, originally believed to be a comedian but then listened to by people who absorb his message. He didn’t create Fascism, he once said. He took it from the consciousness of the Italian people. The film is actually a counterpart to a German novel and movie from three years ago that had Hitler re-appear. Both were meant as warnings about the new far-right politics stirring in those countries. The Italian film debuted during the last national election but didn’t deter the voters from swinging right, largely because of anti-immigrant sentiments. It is highly entertaining, until a Holocaust survivor’s tirade changes the mood to dire. Massimo Popolizio is compelling as Il Duce. (Screens Tues 8:25 pm) 4 out of 5

TUTTI A CASA – POWER TO THE PEOPLE? This is a perfect companion piece to I’m Back. It’s a documentary showing the rise of one of the parties that did so well in Italy’s last election. The Five Star Movement, referred to simply as the Moviento, was started as a protest by a comedian, Beppe Grillo, after he was banned from TV because he was including more political content in his routines. He attacked corruption, Berlusconi, the Mafia, edicts by the European Union, growing inequality, “politicians riding around in armored cars and out of touch with the people.” 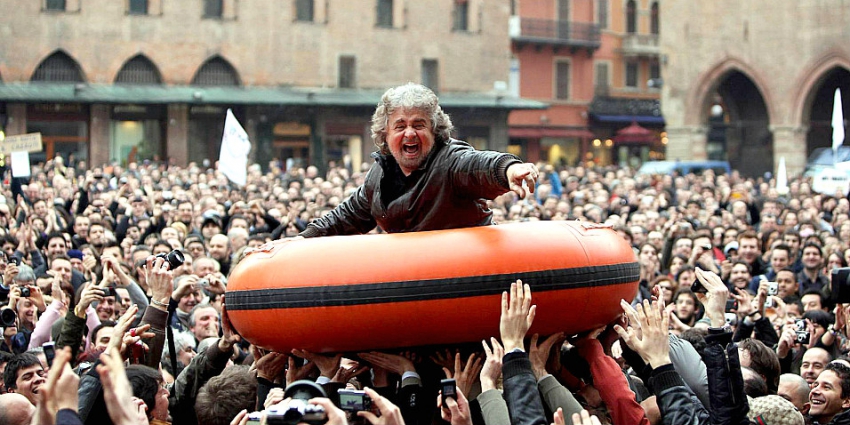 Danish director Lise Birk Pedersen documents the fantastic energy his movement aroused and then chanelled into election success. And then like with many populist movements, there are the splits that reality brings on. No party has a majority. Does the movement join a coalition? Purists are adamant, No. The debate almost tears the group apart and Grillo, who did not run for office, seems to be pulling strings from behind. It’s compelling viewing in these days of populist politics and oddly also resonant for people who lived through very similar internal disputes back in the days of the New Left. And mostly it’s a rousing look at the on-going disarray in Italy’s political system. (Screens Monday 4:30) 4 out of 5

THE MAN WHO BOUGHT THE MOON: This is the gala opening to the festival on Friday night and a clever depiction of one regional difference in Italy. Sardinia is a semi-autonomous island where old customs, games and a unique dialect survive. In this fantasy, a man there claims to own the moon and a police agent is sent to investigate. First he has to be coached to act and sound like a local. Then he can search a city, a small town and a bar to find the guy. Some intense fusball playing later, he does find him and gets a legal explanation from him about his claim to the moon. All but the 10 per cent Neil Armstrong was said to own. The film is absurd and silly, droll and also serious. It’s a light and entertaining start to the week. (Friday  at 6:00 with wine, music and speeches, at gala prices. Also Wed 8:30 pm) 3 ½ out of 5

V6A: Is this Italian? The director, Ruggero Romano, is but he’s been living and studying film here for three years and this is his portrait of the Downtown Eastside. He gives the residents there a platform to talk, which is not a bad thing, but hardly new. He found a number of very articulate folks who expound on peace and love, taking care of each other (unlike people in the rest of society) and feeling like family with them. All fine, but where’s the context? The bad housing; the drugs, the violence. “We’re in the middle of an overdose crisis,” says some graffiti. “Mayor Gregor, lord of slumlords,” says another. What’s that about? Why are people seen demonstrating about the Balmoral Hotel? That’s all too much in the background. The personal expositions take up almost all the front. Nicely filmed and edited, though. (Sun. 7:30, with the director taking questions, but sold out and only standby tickets possible. Also screening after the festival, on Sun. Jan 13 8:45 p.m.) 2 ½ out of 5

ESCAPE ROOM: The first horror movie of the year seems to owe a lot to the old Saw movies. Six strangers, one played by local actor Tyler Labine, are lured into a building and must find a way out through a series of rooms fitted with traps. If not, they die. No previews here but some non-critic reviews on IMDB say it starts tense (through 3 rooms) and then fades. Filmed in South Africa.