... with only seven magical dimension-transporting rings to help him. And, of course his blinding speed, which brings on the narrative. He causes a power failure across the US Northwest and draws the attention of both a cop (played by James Marsden) in the small town of Green Hills, Montana and the Pentagon which hires “that freak” Robotnik to investigate. I have no idea how true that is to the many generations of the games, the brief animated TV series or the books that followed but here it settles down into a typical children’s movie. Sonic (voiced by Ben Schwartz, known for his varied TV experience) is lonely and wants to make a real friend. The cop wants to move up to a bigger force in San Francisco. Robotnik, well he’s “the top banana in a world of monkeys” whatever that means. Jim Carrey has a great time playing him with absurd bravado. He’s got drones and a sly wit. There are frantic chases (one to Paris, China, Egypt and back) and a climactic scene on “that pointy building” in Frisco. But Chris Gailus as a TV news anchor is a sign that most of it was filmed around here and on Vancouver Island. It’s a very entertaining family movie. Stay through the end credits for a gift to the fans. (International Village, Marine Gateway and many suburban theatres) 3 ½ out of 5

KDOCS FILM FESTIVAL: This is a look-ahead to the highly regarded festival of documentaries about social justice. It's on next weekend at the VanCity Theatre but actually starts on Thursday, opening with two films about the environment.

INVENTING TOMORROW follows six highschool students from four countries as they figure out  solutions to specific problems where they live. There's eutrophication (look it up) in India, lead from tin mining in Indonesia, pollution in Hawaii and Mexico City, and more. The film then watches them take their ideas to the premier science fair on our planet, the Intel International Science and Engineering Fair (ISEF). (Ironically another film that came through a few months ago followed another group of teens with different projects to the same fair). Both offer a glimmer of hope that there are things that can be done.

BEYOND CLIMATE addresses "the paramount issue of our time", what we used to call global warming from a specific BC perspective and with one the most articulate voices on the subject, scientist and broadcaster David Suzuki. He narrates the film, appears in it to reflect on how our province is being affected, and will be there in person with director Ian Mauro for a question and answer session.   The film talks about pipelines, LNG, salmon decline and indigenous rights.  There's more on these and subsequent films at http://www.kdocsff.com/

DOWNHILL: Americans took an intense Swedish film and remade it into this bland timewaster. Force Majeure from 2014 was included just last month in the Cinematheque’s festival of the best films of the decade. Don’t expect even a bit of such praise for this new one, although the story is the same (mostly) and the locations are gorgeous. A family goes on a skiing holiday in Austria and the glistening snow and the Alps have never looked better. But a controlled avalanche terrifies when it comes at them as they sit on a patio and alarms the wife and two sons when the father seems to have a cowardly reaction. 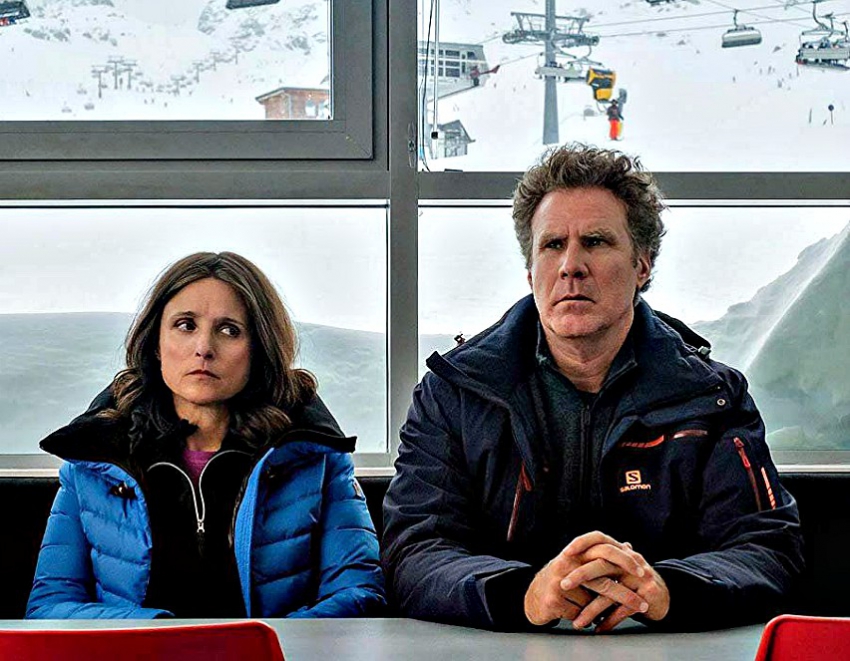 That sets up suspicion, denying, arguing and even, by the wife, a brief flirtation off to the side. But the examination of gender roles and human nature, particularly what men are supposed to do, so forcefully examined in the original, is dulled here, and in the case of social class, practically non-existent. Part of the problem is the cast. When Will Farrell and Julia Louis-Dreyfus lead you expect a comedy. Some in the audience the other night were trying to laugh but not much of what they saw was funny. There were a lot more sexual references written in compared to what I remember from six years ago. They were generally a distraction. (International Village and suburban theatres) 2 out of 5

Two others also now playing but not previewed:

BLUMHOUSE’S FANTASY ISLAND: That first name is the prolific producer of horror movies that has created a version, in their style, of the old TV series. Remember Ricardo Montalban and  Hervé Villechaize as the hosts on the tourist island where guests could have their deepest fantasy staged for them? I can’t say what the film does—it wasn’t available to review—but I understand the fantasies in it all turn into nightmares.

THE PHOTOGRAPH: You’d think that with the ongoing demand for diversity this film would be promoted wider to the media. Not here, though. This is a story of love and history in a black family and was directed by a black woman, Stella Meghie. Issa Rae stars as a woman who delves into her late mother’s life story when she discovers a photo hidden away in a safety deposit box. It shows her with a man she’s never seen. Somehow that leads to a romance of her own, with a hot shot journalist (LaKeith Stanfield). It’s timed to Valentine’s Day.