The Monuments Men, The Lego Movie and celebrations of animated films, special effects, the outdoors and Jean-Luc Godard 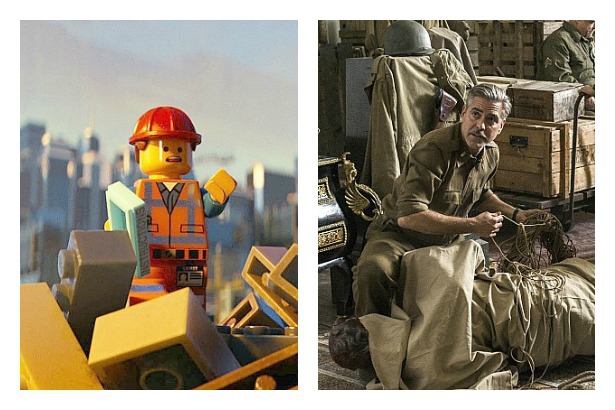 Is The Lego Movie really better than George Clooney’s new one? Strange but true.

OK, the Olympics are on again, but look at all these movies. A few new ones, some old and a lot of short films, both live action and animated.  So much to choose from.

THE LEGO MOVIE: My grandkids said this is the best movie they’ve ever seen. Even if they only mean “recently ” that’s a big rave from a couple of smart children but  I think adults will get even more out of it. This film is peppered with jokes and ideas for grown ups. They’re witty and clever and fit in perfectly with the kiddie stuff so that both generations are served.

It’s not, as you might fear, an extended commercial for the toy. In fact the filmmakers  (Phil Lord and Christopher Miller who also made the wonderful Cloudy With a Chance of Meatballs) have worked in a subtle critique of what Lego has become:  now tied-in with big movies and TV shows and sold in kits that only need to be assembled. The film extols the old virtues: imagination and creativity. On a practical level it challenges the kid who only wants to build as the instructions say and never improvise. Pretty ambitious for an animated film. 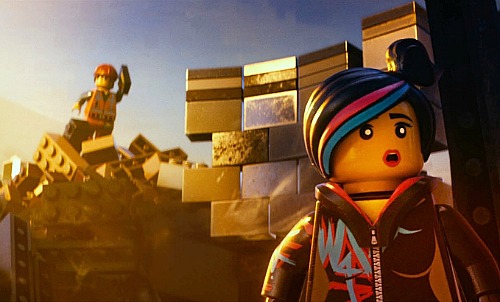 Chris Pratt, Will Farrell, Elizabeth Banks, Will Arnett and Morgan Freeman are the main voices in a story that starts like a Saturday morning cartoon. Pratt’s ordinary construction worker is mistaken for a “special” one, (“the most interesting, post powerful person in the universe”). According to a prophesy, only he can stop Farrell from destroying the various Lego worlds. Banks is a tough young woman who believes in him (for a while) and Morgan is a mystic who encourages him. Things in the story go wrong of course but the film flies with big action scenes, cheeky humor, Arnett as a dryly funny Batman, an hilarious jab at Star Wars characters and Liam Neeson playing both a good and a bad cop. Near the end, it seamlessly switches to live action and back which underlines that it is actually taking about real issues. Great fun all the way. (International Village, The Dolphin, The Dunbar and suburban theatres) 4 out of 5

THE MONUMENTS MEN: George Clooney’s new one (he wrote, directed and stars) is interesting but not, as it should be, stirring.  The story is true, taken from an historical novel and altered again for the movies, but new to most of us. That’s the interesting part. Clooney’s telling is low-key and thoughtful, even sluggish at times, not what we expect from a war movie. 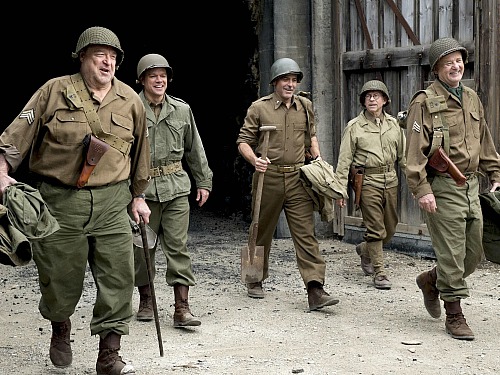 Visually, it’s like every commando movie you’ve ever seen. A small unit trains for a special mission, passes right by the regular forces and sometimes conflicts with them. But these guys (Clooney, Matt Damon, Bill Murray, John Goodman, Jean Dujardin, Bob Balaban and Hugh Bonneville, of Downton Abbey fame) are not soldiers. They’re art scholars, trying, as World War II is ending, to find a huge cache of fine art the Nazis had stolen for Hitler’s private collection. (In real life there were close to 400 of these detectives). The seven here split up and come back together as they track leads in Belgium, France and Germany. Damon gets major help from a sheepish secretary in Paris, played rather awkwardly by Cate Blanchett. 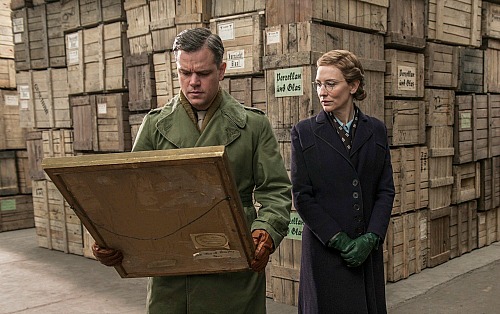 The scenes in bombed-out towns and looted buildings are well-staged but there’s little tension. More harmful than that:  the stakes aren’t properly laid out.  Is it worth sacrificing your life for some pieces of art? I think it can be and Clooney’s character does too in a couple of discussions. He doesn’t really make the case though. We’re left emotionally uninvolved and just watching an interesting bit of history.  (5th Avenue, Scotiabank and many suburban theatres)   2 ½  out of 5

OSCAR SHORTS (ANIMATION):  If you’ve got taste for more animated story telling, catch the five competing for the Academy Award this year playing at the VanCity Theatre.  They’re not all short. One, the best one actually, is 26 minutes long. The styles run the gamut and the overall impact is entertaining. 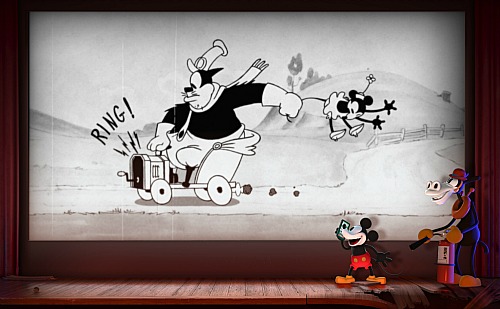 GET A HORSE is a Disney cartoon, only 6 minutes long, and a salute to both the House of Mouse’s great history and its current efforts. Mickey and Minnie are on a hay ride, hassled by Peg-Leg Pete. It looks old, black and white, a little flickery, like an original, but is actually a brand new creation. Pete knocks Mickey right off the screen. Mickey now in color tries to get back in and a string of gags and fairly violent incidents follow. At one point, Mickey calls Pete on a cell phone. A lively mishmash but it seems the animators are having the best time.

MR. HUBLOT has a steampunk  look and feel about a fastidious little man (robot?) who brings a yelping robot dog into his cluttered apartment. The dog grows to room size. That’s it. Nice style in the artwork though.