Male bonding thrives in The Expendables 3, The Trip to Italy and Land Ho 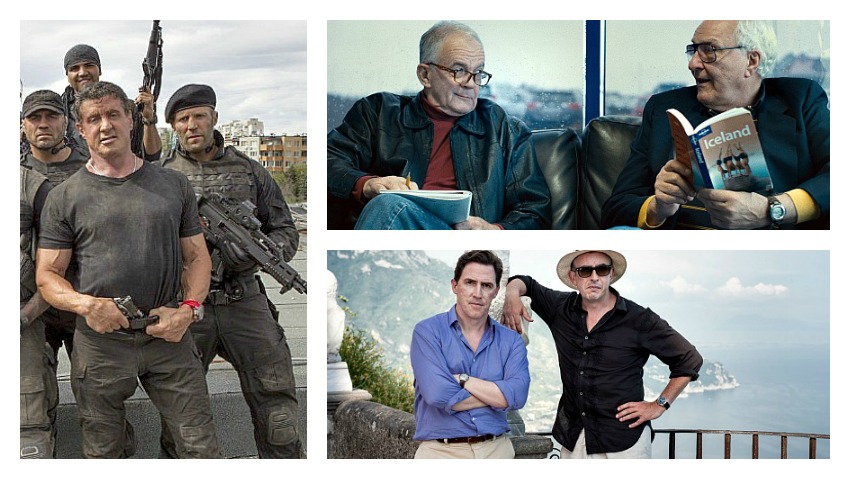 And watch for an oddball rock and roll story in Frank.

The new films this week start and end with the future. From the imaginary to the widely predicted. Both pretty grim. How about some good old male camaraderie then? We’ve got three examples, plus a  bizarre rock “n” roller and a Canadian drama set in the far north.

THE GIVER:  Years before books like The Hunger Games and Divergent, there came this vision of a dystopian society aimed at and featuring young people. This one was published in 1993 and now the film version arrives into a field that’s become quite crowded, with more on the way. Maybe that’s why this one seems so unexceptional, even with Meryl  Streep and Jeff Bridges in the cast. And the brief and unremarkable film debut of Taylor Swift. We’ve seen most of it before. It plays out exactly as we expect it to.  Except dumber.

It is “after the ruin”. A new society has been established. Harmony is the ideal; differences aren’t allowed. Neither are dancing, music, color, love or, apparently, free will. Everybody is assigned a job and a role in society at a school graduation ceremony. Streep plays the chief elder who hands out the jobs and pops in now and then as a hologram to check up on how things are going. Brenton Thwaites (most recently of Maleficent) gets a special assignment “Receiver of Memories.” Mandatory daily injections have wiped out people’s memories of the past. Only Jeff Bridges as a crusty librarian still has them. 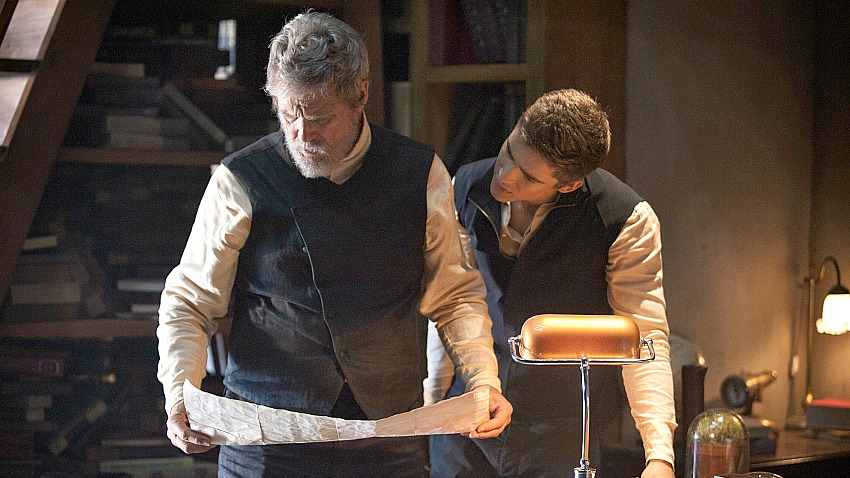 He’s the “giver” who will pass them along. Why? If society doesn’t want them known because they recall war, strife and discord, why are they being preserved? More questions will come to you as holes in the story show up. Thwaites sees the past in trance-like flashbacks and through them leans the grim truth about his society. Not surprisingly he turns into a rebel. Although it’s stylishly designed and efficiently directed by Phillip Noyce, the film already feels old. (International Village and suburban theatres) 2 ½ out of 5

FRANK: Want something funny, endearing and bizarrely wacko? Try this glimpse inside the music business in England circa late 70s when new wave offered a DIY style with a sense of humor. This film gives us Michael Fassbender as a semi-fictional version of a musician who enjoyed a brief popular ride without showing his face. He always wore a papier-mâché mask that covered his head. 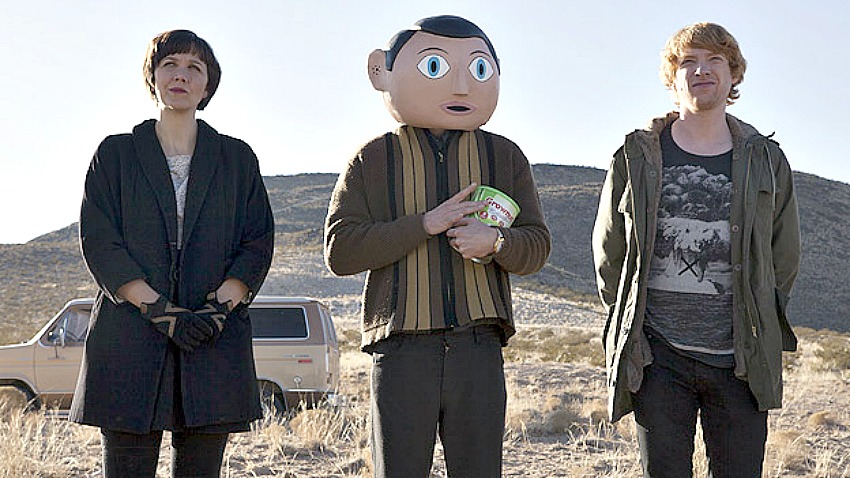 He was real, though. He called himself Frank Sidebottom and had created the character to promote a video game but found an audience beyond it.  In this film Domhnall Gleeson plays an aspiring songwriter who is invited into his band, spends a year with them in a farm house recording an album and travels with them to Austin Texas to play for a perplexed crowd at the South by Southwest music festival. Maggie Gyllenhaal, as the band’s theremin player, is hostile to him but he stays, determined to learn “Frank’s secrets.” The film is based on a magazine article by the real-life songwriter.  It captures the mood perfectly of an ensemble with a leader charismatic and mad enough to say “feel the galactic vibe” and tell his band mates to “push to the furthest corners and unlock the music hidden there.” Fassbender  is inside that mask almost the entire film and yet makes Frank believable as an artist driven to find  something new. It’s a comedy with insight. (Rio Theatre) 4 out of 5

THE TRIP TO ITALY:  The first of two male-buddy travel pics (see also Land Ho). This has Steve Coogan and Rob Brydon on the road again to sample the cuisine. Three years ago they ate and bantered their way through northern England. This time they’re in charming Italian villages from Tuscany, past Rome, down to Capri. 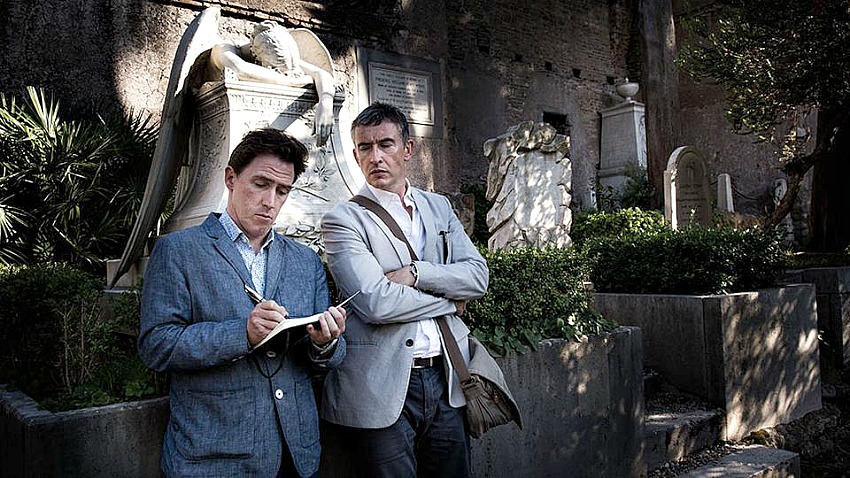 In one sense it’s the same movie again. They do impressions as they eat, of Pacino, Hopkins, De Niro,  Brando, a hilarious Tom Hardy. Also Michael Buble and Gore Vidal. They listen to and comment on Alanis Morisette and Avril Lavigne and discuss Lord Byron’s indiscretions during his years in Italy. Very funny, droll stuff. This time though there’s a parallel story line—their less-than-ideal family lives.  Coogan has phone conversations with his estranged son, who shows up personally late in the film. Brydon has cool phone chats with his wife and spends a night with a tour-boat woman. All that flips the two men’s characters—Coogan was the horn in the first film. The result is more self-deprecating irony that plays on and with their image. And makes you wonder: is it real or another impression … of a version of themselves? (5th Avenue) 3 ½ out of 5

LAND HO: This one’s perfect for summer vacation time. This amiable film will have you feeling the travel bug yourself while reflecting on the nature of friendship, old age and the contrasting personalities of a couple of geezers. It’s funny, bittersweet and easy to take. 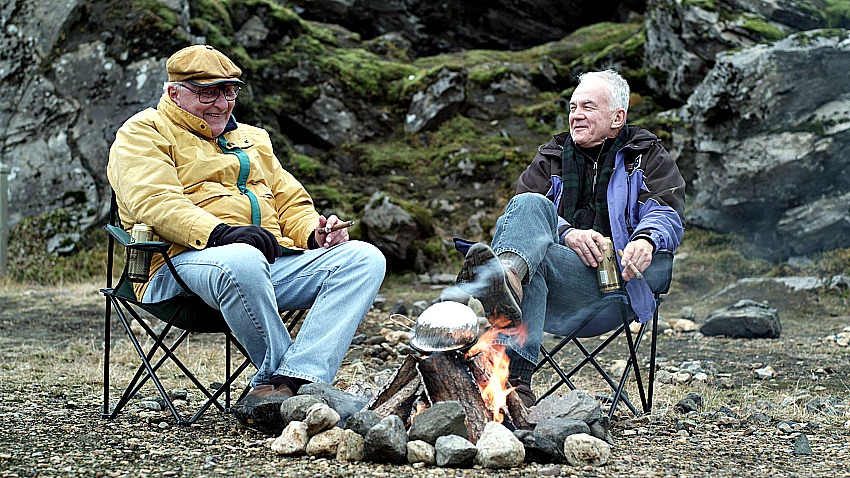