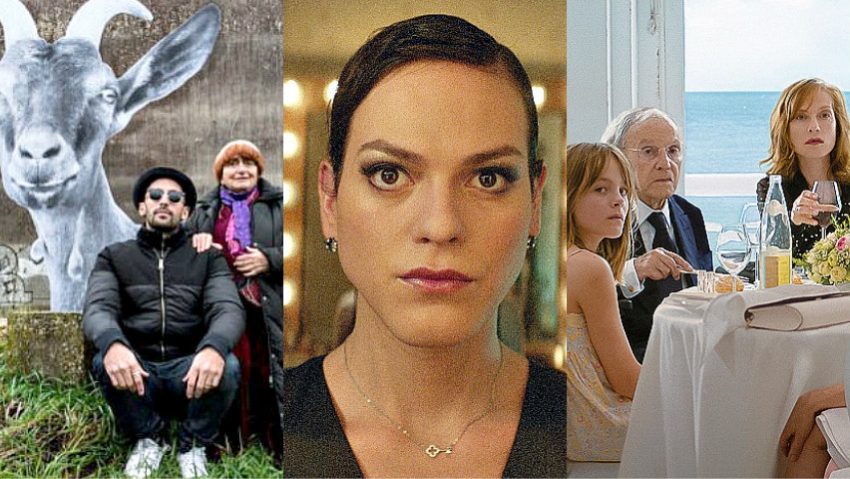 Including whimsy from Agnès Varda, cynicism from Michael Haneke and a startling transgender actor

There are so many regular movies to cover Friday, I’ll give you a few VIFF tips leading into the weekend right now. The most hyped title is a Chinese epic called The Hidden Sword. It starts Saturday and will be followed by two other in-demand titles The Florida Project and Borg Vs McEnroe.

Tonight (Thursday) Alanis Obomsawin’s new film Our People Will Be Healed will screen at 9 p.m. at the VanCity Theatre with a special introduction. That’ll be by Canada’s Heritage Minister, Mélanie Joly, who is visiting the festival and is expected to make a few announcements earlier in the day.

These films I have seen already and rate this way:

A FANTASTIC WOMAN: We hear so much about transgender people these days it’s not at all surprising that a drama has come along about their lives and their problems and is aimed at a general audience. It’s entirely appropriate too that it stars a transgender actor. But what is surprising is how good it is, not at all preachy but clear and direct about the issues. This is one of the best and most touching films I’ve seen at VIFF this year. It’s from Chile, directed by Sebastián Lelio who brought Gloria, another powerful film with a woman’s story four years ago.

Marina, played by a standout transgender performer named Daniela Vega, isn’t a normal woman, most everyone in this film thinks. She lives and parties with a lover much older than she (Francisco Reyes) but he dies early in the film and she has to face the rest. A doctor talks to her as if she’s a man. The police woman who investigates is from the sex offences squad and requires she undergo a physical examination. There’s shunning and outright hostility from the man’s family. The word “perversion” is used and also this milder comment: “When I look at you I don’t know what I’m seeing.” The film carefully pieces together an entire background of these observations and bits of prejudice and in parallel shows Marina’s reaction. There’s some anger, not much despair but a lot of growth in the strength of her resistance. This is an extremely well-made and affecting film.  (Screens today and again Wed) 4½  out of 5

FACES PLACES:  Here’s a road trip you’re going to enjoy. It’s informative, funny and poignant. 89-year-old Agnès Varda, a veteran director dating back to the French New Wave, is travelling with a hot-shot  photographer known simply as JR through various rural areas of France, meeting people by chance and pursuing an art project to celebrate their lives and livelihoods. 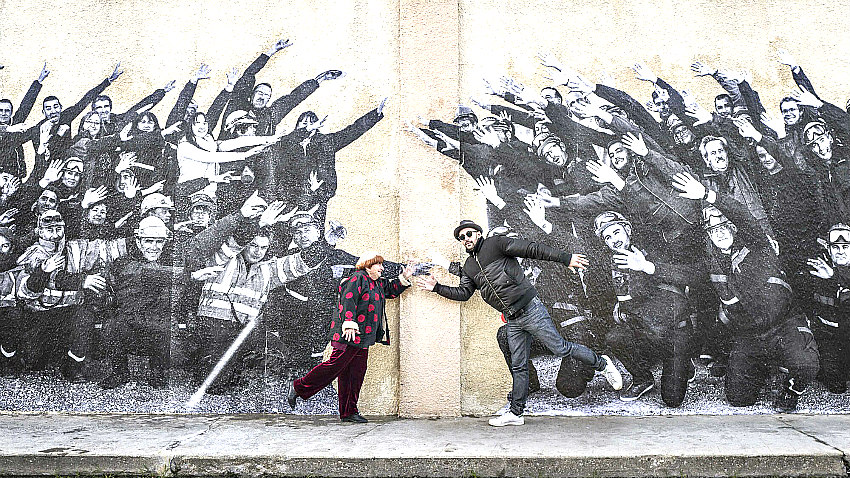 They take pictures of ordinary people, or creatures in some cases, make giant prints and paste them on walls, buildings or other structures. A water tower gets a picture of fish. A farmer is pasted up the full height of his barn. A line of brick cottages slated to be demolished gets a portrait of the last holdout still living there. At Le Havre every cargo container in a huge stack gets a dockworker’s picture. The film gets across the whimsical tone of the project and also the serious thoughts the two artists toss back and forth or hear from the people they photograph. It’s a charming, warm-hearted film but you’ll be a little bit startled when Varda has occasion to term an old associate, Jean-Luc Godard, a “dirty rat.” (Screens Friday) 4 out of 5

HAPPY END: This one is very dark even though it is brightly lit and briskly played. Michael Haneke doesn’t do Happy.” He may start that way but as we’ve seen before in films like Cache and Funny Games, he gradually turns everything askew. He’s on to the privileged bourgeoisie in this one, in Calais, France where refugees congregate, though these characters hardly notice, and pretty much don’t care. They’ve got too much nasty business in their own circle to live with. 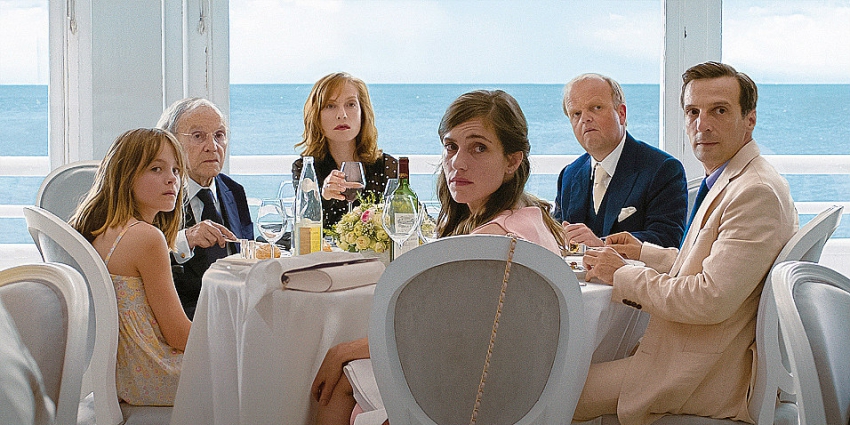 Number one is a 13-year old girl whose cell phone videos of her mother open the film. She kills her hamster with mom’s anti-depressants and then sends mom to hospital. Her behavior is learned, maybe inherited, as we slowly come to realize the more time we spend with her family. Her estranged father, who she goes to live with is an adulterer, we learn from several texting sequences. The family patriarch (Jean-Louis Trintignant) is turning senile and his daughter (Isabelle Huppert) is running his construction company. She’s making deals and fearing a lawsuit after her alcoholic son failed as a supervisor and allowed an accident to happen. There’s much more, told in scattered bits but amounting by the end to a scathing attack on the whole class. There’s a lot of humor and several echoes of previous Haneke films. The patriarch, Georges, for instance, recalls carrying out a mercy killing, just like a different character, also named Georges and also played by Trintignant, in Amour. That film was powerful. This one is cynical and sarcastic. (screens Thurs and Sun)  3 ½ out of 5

THE LINE: You think it’s hard keeping Europe together? Look at how hard it was to create it originally. This entertaining film tells one small part of that from the border of Slovakia and the Ukraine. It’s 2007. One side is about to join what’s called the Shengen Zone (basically 24 of the European Union’s 28 countries). A bustling illegal economy, based on cigarette and people smuggling, is about to go bust. Debates break out about what to do. It’s fiction but also grounded. 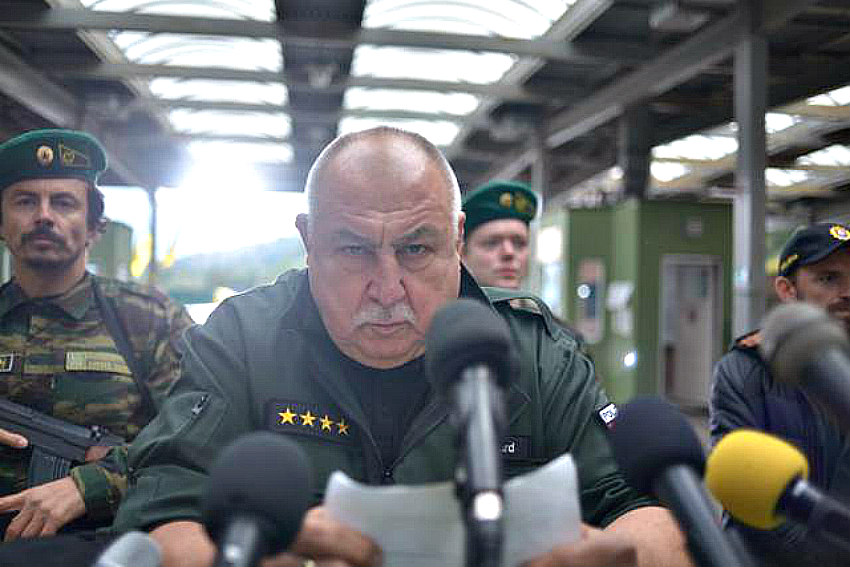 The police, of course, are vigilant, which amounts to making announcements but taking payoffs on the side when they search a truck and somehow miss what’s been secreted in there. We see that trade in quite a bit of detail and then see the characters’ home lives and family problems, including how important the income is to them. Some want to get into drug smuggling and that fuels major arguments. The screenwriters and the director, Peter Bebjak, seem to have taken inspiration from The Sopranos because that flavor exists throughout this film. There’s a lot of humor, the settings and some of the people are quaint and the bosses are tough and imposing. (Last screening is today) 3 out of 5