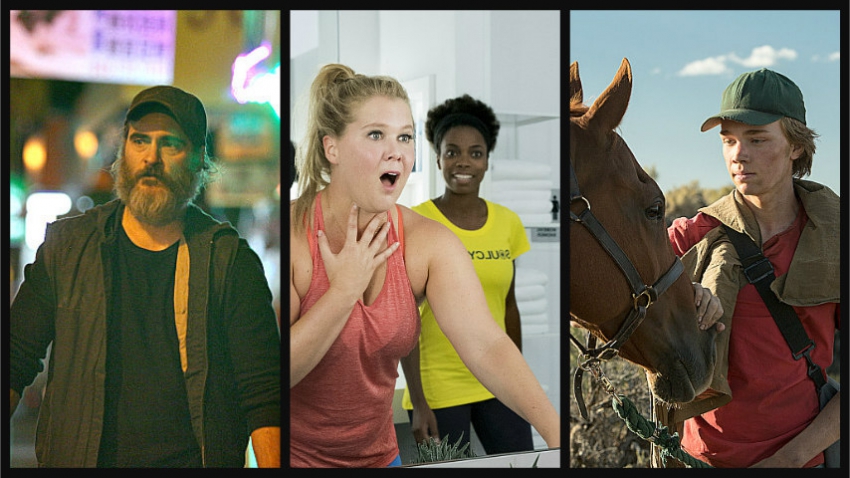 Also surveillance in a love story, a speculation on a Canadian indigenous mystery, Supertroopers making jokes about Canada and a mistep into the spy genre by Wim Wenders

Maybe the distributors are trying to stay out of the way of The Avengers that barge in next week. Maybe that’s why there are so many new films opening today. Notice the range: one very tough one, two big comedies, the two films by Canadians and one almost entirely about Canada. And even then, two others.

You Were Never Really Here: 4 stars

YOU WERE NEVER REALLY HERE: Here’s a grim film made absolutely compelling by tremendous acting by Joaquin Phoenix and strong direction with edge and a sense of urgency by Lynne Ramsay. She also wrote the screenplay, based on a short novel, and won an award for it at Cannes. He won there for best actor and the film won a seven-minute standing ovation. Interested yet? Here’s the story. Phoenix plays a war veteran who has turned to a form of private detective work. He finds young women who’ve been forced into the sex trade. Instead of a gun, he carries a ball peen hammer and just like with any gun that shows up in a movie, it will get used. He also carries the trauma of war and seems to have a death wish. But in his most lucid times, he’s impelled to go after the bad guys who prey on the innocent.

His newest mission is to find the daughter of a New York state senator. Along the way he uncovers a conspiracy and that really awakens the trauma-propelled impulse inside him to hit out. The plot is thin, rather trite actually, but what Ramsey and Phoenix do with it is gripping. We get to feel the rage, sense the demons inside him and understand what drives him. It’s a nasty yarn but moral and true. (Fifth Avenue) 4 out of 5

I FEEL PRETTY: A timely, should-be-relevant subject is dragged out too long and argued too thinly in Amy  Schumer’s latest comedy. It’s funny early on, but only fitfully so later. Label it a near miss. The subject is body-shaming although we don’t actually see much of that going on. What we do get is Amy, who is, how shall I say this, somewhat plump, feeling shamed, especially when she stares  into  the bathroom mirror. Scenes like that will resonate with many women. 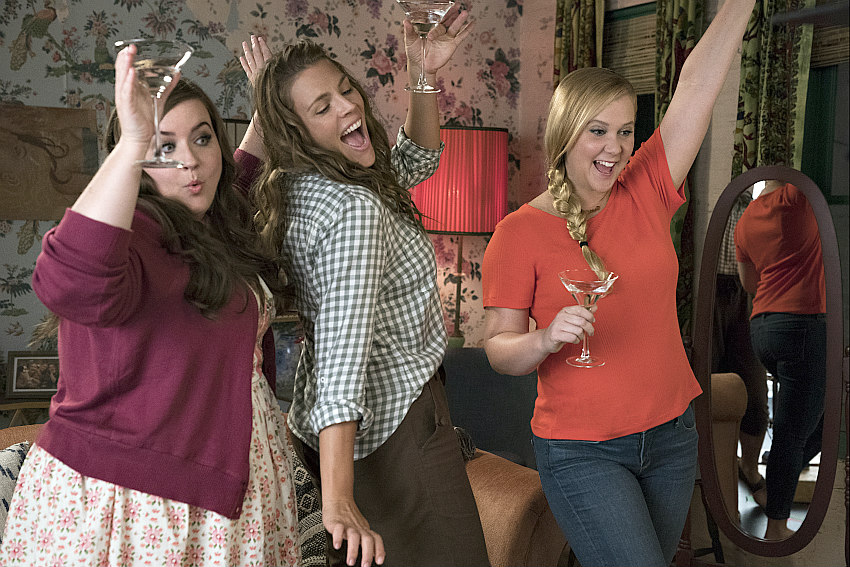 Actually Amy is shaming herself because she’s insecure about how she looks. That’s unlike her two friends, one of whom is played by Saturday Night Live’s Aidy Bryant, who has a similar body profile and is comfortable with it. Amy is a victim of the body image pushed by advertising, magazine articles, the gym she frequents and pretty well every workplace she enters. That includes the lobby of the cosmetics company she works for. Fashionably thin women are constantly slinking through there. Her own job keeps her out of sight in a basement below a Chinese restaurant, until a fall off the cycle at the gym, stuns her into believing she’s beautiful, witty and gay. She starts living that way; talks her way up in the company and is listened to for advice by the CEO (Lauren Hutton) and her daughter and heir (Michelle Williams, speaking in a timid, squeaky voice this time). Much of this is funny, then repeated, then echoed until a simple concept is dragged out and belabored. The message is good, though obvious, and a turnaround in Amy’s psyche is inevitable it but it requires some patience to really enjoy this movie. (International Village, Marine Gateway and suburban theatres) 2 ½ out of 5

EYE ON JULIET: A long-distance love story can work. Another film newly arrived this week can't do it, but this new one by Kim Nguyen from Montreal does. He's been on a roll ever since he got an Oscar nomination for Rebelle. Now he's showing a near fairy tale about modern communications. Technology can both connect us and isolate us, he demonstrates, but you don't have to get as deeply meditative as that to enjoy this film. There's intrigue and discovery, mystery and surveillance, and yes, romance, in this tale. 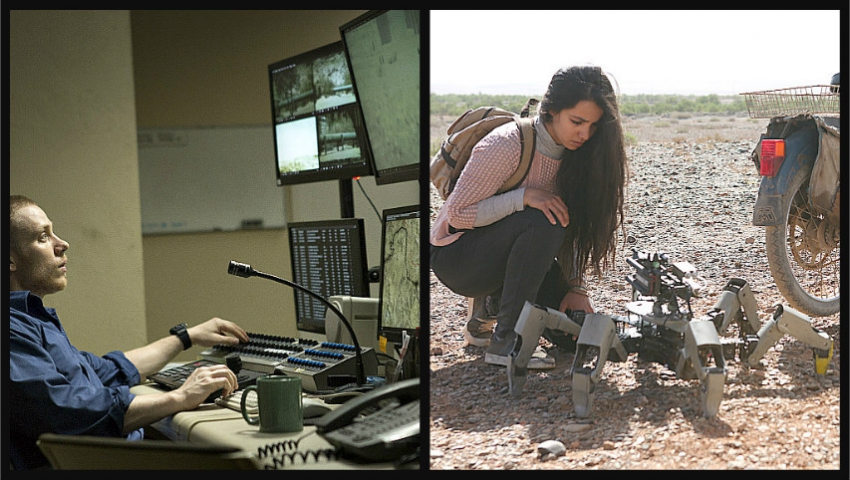 British actor Joe Cole plays a technician in Detroit who spends his days staring at monitors to watch for mechanical problems or even thieves at an oil pipeline in North Africa. He's got handy six-legged robots called hexapods that he can move around by remote control. A little too far and too easily to be really convincing but he can also speak and hear through them. Words are automatically translated.  When he sees a young woman riding around on a small motorcyle he becomes fascinated, follows her and through spying on her and talking to her learns her story, that she's trying to run away with a boyfriend despite her parents' demands that she marry a man they've chosen for her. She's played by French actress Lina El Arabi whose luminous presence so charms the monitor that he tries to help, long distance of course. Things don’t go as he plans but the film is engrossing all the way. You’ll be just as much into surveillance as he is. (International Village) 3 out of 5

HOCHELAGA, LAND OF SOULS: François Girard’s latest is bound to appeal to a more limited audience than his most famous titles The Red Violin and 32 Short Films about Glenn Gould. It’ll probably be of most interest in Montreal because it deals with local history there. But it has at least three attributes that could draw in Canadians anywhere. It’s visually stunning, muses on a long-running historical mystery and helps put us in touch with our country’s indigenous roots. The film won four Canadian screen awards this year. It was nominated for eight.