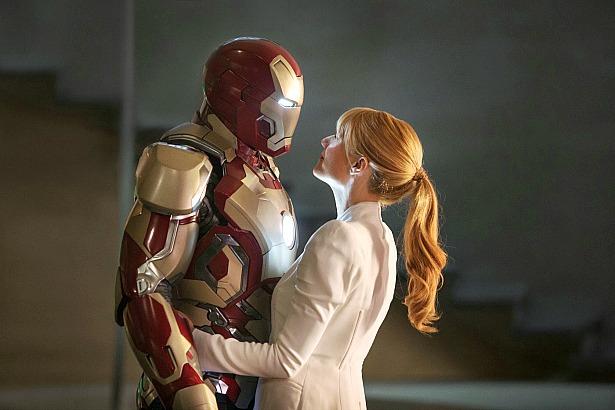 It’s Iron Man 3 but for Robert Downey Jr. that’s four flights now as the Marvel Comics character; and his best.

One movie tops them all this week. But if you’re not into Iron Man, there’s a small Canadian gem and a busy festival of documentaries.

IRON MAN 3: The biggest movie of the week may just be the biggest of the summer too. It is that entertaining, and not just for comic book fans. It’s for anybody who likes a fun popcorn movie now and then, enjoying huge set pieces of action and special effects with a smart story told around them. The first in the series had them all; the second didn’t and last summer’s The Avengers, which included the Iron Man character, raised the standard for this film to match. It does. 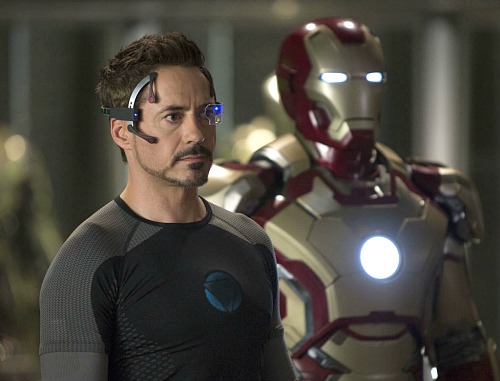 Robert Downey Jr. again brings his smart-alecky humor as Tony Stark, the industrialist whose iron suit makes him as powerful as a super-hero. This time, though, he’s not clammed up inside it for most of the film. He’s invented a way to levitate the various pieces to fly over to him when he needs to have it on. (Hey, it’s a comic book story, not science. A rival has developed a way to hack into any living organism and re-code its DNA. You just have to roll with the fantasies in these movies).

We get to see Tony as an obsessive. He can’t sleep and suffers anxiety attacks, lingering effects from a giant battle in the last movie. His secretary (played by Gwyneth Paltrow) is now his live-in girlfriend and maybe the real power at his company. He has to face down both an inventor (Guy Pearce), who he snubbed years earlier and a super villain called The Mandarin who issues video threats just like Osama Bin Laden used to. 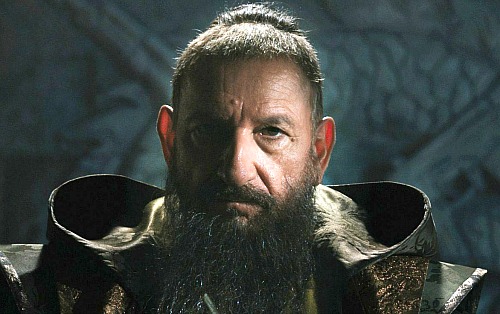 Ben Kingsley plays him and will be the talk of the film for what it does with his character. Don’t let anybody spoil the surprise. And while we’re at it, two other tips. Stay through the lengthy final credits for a substantial extra scene and if you have a choice, don’t bother with the 3-D. It doesn’t add much. The big scenes, including Stark’s cliff-hanging house destroyed by a helicopter attack, 13 people falling out of the U.S. president’s plane Air Force One and a firefight among the cargo containers and cranes in a Florida port are perfectly exciting on their own. The director and co-writer, Shane Black, who years ago wrote the Lethal Weapon films, has crafted a speedy mystery thriller that balances the facts and characters of the Marvel universe with current issues (terrorism, corporate corruption, official inaction).  This film is worth seeing twice.  (The Dunbar, Dolphin, Scotiabank and suburban theatres everywhere) 4 out of 5

STILL MINE: The way some people are writing about this one, you’d think it is all about death. I see it as squarely concerned with living, and fighting for your right to choose how to do that. It’s a true story that happened in New Brunswick and as written and directed by Ontario’s Michael McGowan is a poignant love story, a statement that often the old ways are just as good as the new and a battle against senseless bureaucracy. 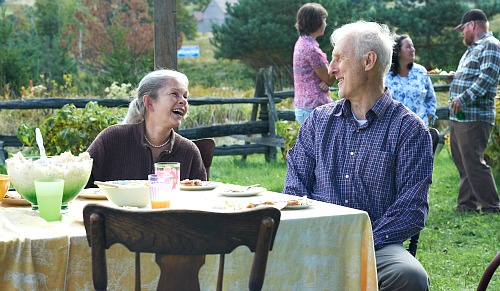 Salt of the earth James Cromwell and magnificent Genevieve Bujold play a couple in their 80s, married six decades and still in love, dwelling on a rural property near the sea. She’s starting to show signs of dementia and will soon be unable to climb stairs. He starts to build a smaller house with a better view. He mills his own timber and his grandson draws up the plans but the inspector says the timber doesn’t have an official stamp and the grandson isn’t an architect. When the old man rips down a stop work order he lands in court. Earlier he found he could no longer sell the strawberries he grows because of new regulations. “Welcome to the 20th century,” he’s told. Cromwell’s unyielding spirit, rewarded with a best-actor prize at the Canadian Screen Awards, and Bujold’s moving performance, a lighter counterpart to the old lady in Amour, make this a quietly intense and altogether satisfying movie experience. (5th Avenue, International Village, Park & Tilford) 3 ½ out of 5

DOXA 2013: Documentaries are flourishing more than ever. VIFF a few years ago had to set a limit on the number to show but specialized festivals, even specialized theatres, are right there on top of the wave. This is DOXA’s 12th edition and with over 100 full-length and short films scheduled, the best I can do is point out a few that particularly interest me.

For the full list pick up the catalogue available at various places around town or go to the website: www.doxafestival.ca. Note, though, that the venues, The Playhouse, The Cinemathque, The Rio and VanCity Theatres, no longer include The Collingwood. That theatre is closing in a landlord dispute. 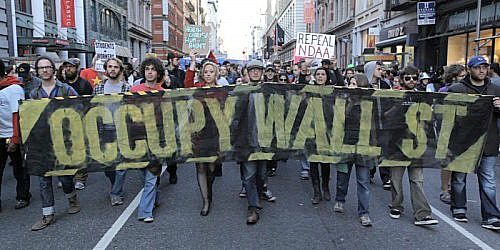 OCCUPY THE MOVIE starts the fest (and plays two other times) to explain exactly what that anti-Wall Street protest was all about. It’s made by Vancouver filmmakers, appropriately so because the spark for the movement originated here. (Kalle Lasn of Adbuster’s Magazine is one of the people interviewed).

In WHEN THE BUBBLE BURST the ex-mayor and a councillor from a village in Norway travel to Wall Street to ask why decisions made there caused financial chaos for them back in 2008.

Two of the most interesting films are on at the same time: CRITICAL MASS is about overpopulation and the limits of growth while GOOGLE AND THE WORLD BRAIN explores the search-engine company’s mammoth (and disturbing) ambitions.

OUR NIXON adds to Watergate lore. We learned back then that Richard Nixon (audio)-taped everything said in his office. More recently it was revealed that his aides Ehrlichman, Haldeman and Chapin were documenting in and out of the oval office with Super 8 cameras. Their films apparently have a touch of black comedy in this movie.

FATHER FIGURES has a daughter showing and questioning her 73-year-old father from Kamloops about the girlfriend he met online in the Philippines. She’s only 23. This is the film’s world premiere.

BOREDOM, from Montreal, explores one of the less-acknowledged products of our school system.

THE GREAT HIP HOP HOAX, showing two times, is about a couple of Brits who have to pretend to be Americans to get noticed. 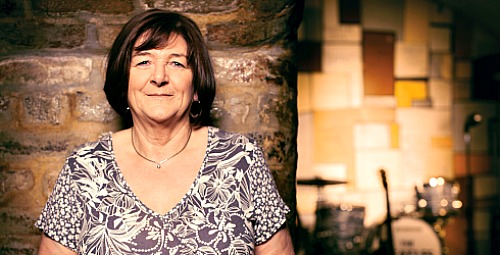 And showing twice on closing night, there’s GOOD OL’ FREDA in which the Beatles’ former secretary tells for the first time what she saw going on during the 11 years she worked for them.

NOTE: All images are stills from the films reviewed. They are the exclusive property of their copyright owners.