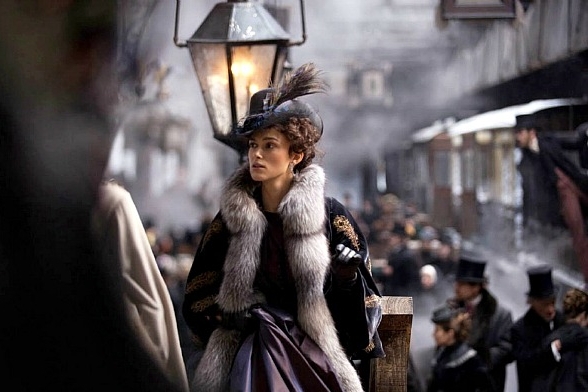 Classic literature and classic film deliver the top stories this week, along with a disaster in China, violent American gangsters and some European films here for only a short time.

ANNA KARENINA:  Tolstoy’s classic tale of love and infidelity has been filmed over 25 times and this must be the most beautiful of them all. Gorgeous costumes and settings project out to us in brilliant cinematography. Attractive lovers Anna and Count Vronsky dance in a sexy swirl at the society ball. One of literature’s prime women’s stories is brought brilliantly to life through clever stagecraft and then rolled to a tragic conclusion.  Not without problems, but with enough energy and success to make this one of the must-see films right now and a likely award candidate very soon.

Keira Knightley is  Anna, married to a dull cabinet minister (Jude Law) in 1874 Russia and drawn away by Vronsky, a self-assured young cavalry officer (Aaron Taylor-Johnson). It’s a scandal, especially when she becomes pregnant by him.  Society shuns her. She gets sick and jealous and turns to morphine.

A parallel love story between a  gentleman farmer and one of Vronsky’s rejects turns out much better. Some film versions don’t include it, but it’s here because this film is very true to the novel. That’s both good and not so good. Emotional anguish as punishment for adultery is a harder sell these days. The tragic conclusion comes on to fast.  Director Joe Wright and scripter Tom Stoppard  should have done more to prepare us  and justify it. They do dazzle us with the stagecraft. The film starts as a play in a theatre, moves out to other settings but keeps coming back, even putting a horse race on stage, with live horses.

Knightley easily shows us Anna’s  moods, demure and shy early; angry and despairing towards the end. Vronsky, however looks too young; Taylor-Johnson doesn’t project the authority the role requires.  (The Ridge, International Village and Colossus Langley) 4 out of 5

HITCHCOCK:  I saw Psycho in one of those triple-bill, flea-pit theatres Toronto used to have. It was Friday night. The place was full of teenagers making noise and tripping each other in the aisles. Until that film came on.  Then they got absolutely quiet and remained hooked to the end.  Hitchcock, which tells the story of how it was made, does not impart much of that film’s power. It’s a safe, standard bit of Hollywood history, fascinating to movie buffs (unless they already know more from the book it’s based on) but not essential to most people. 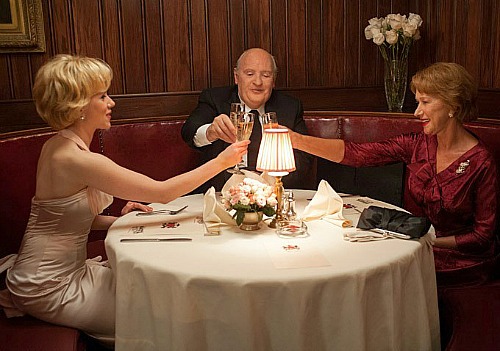 Anthony Hopkins doesn’t much look like the stocky director in the still pictures the studio has supplied but on screen he captures his manner and even his appearance pretty well.  Scarlett Johansson is adequate as his star Janet Leigh and Helen Mirren is supportive but feisty as his wife Alma Reville, who we learn feared Psycho would be “low budget horror movie claptrap.” Hitchcock himself agonized: “What if it’s another Vertigo.”

But he raised the money himself, defied the censors and crafted a suspense classic. Among the intriguing details is the fact that his wife directed a bit of the film. Less interesting is the main story: her near drift into an affair with a screenwriter which stirred up Alfred’s hypocritical ire. After all, Alma rarely complained about his attraction to his blonde leading ladies. What doesn’t work is the recurring entry of Ed Gein, the twisted killer who inspired the novel and then the film.  He arrives in dreams and visions, aka arty affectations.  (Fifth Avenue, International Village) 3  out of 5

KILLING THEM SOFTLY:  I worry about Andrew Dominik, who adapted an old novel and directed this gangster film, and Brad Pitt who produced and stars in it. It’s not only ultra-violent but also the most cynical work I’ve seen in some time. This is the kind of film that has Ketty Lester on the soundtrack cooing  “Love letters straight from your heart”  while Ray Liotta’s brain is blasted out by a shotgun. 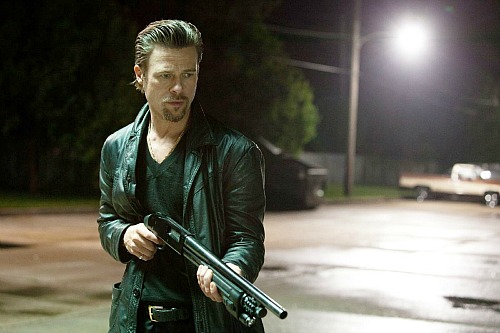 Other graphic killings happen while Obama is on TV contending that Americans  are united as one people. To be fair, John McCain and earlier George Bush are also nattering on in the background about the financial meltdown.