ISN’T IT ROMANTIC: That’s right. No question mark. Why? Who knows, but it is in line with other unrealized objectives of this silly film. (Silly, but often funny. A pleasant enough movie to take a date to or to enjoy on a girls’ night out). The problem is it doesn’t sting. It doesn’t very well carry out the criticism it intends  of romantic comedies as a genre. It’s like many an SNL skit, the kind that understands its target perfectly but can’t manage to say much original about it. Luckily it’s got endearing Rebel Wilson in the lead.  She almost makes it worthwhile. 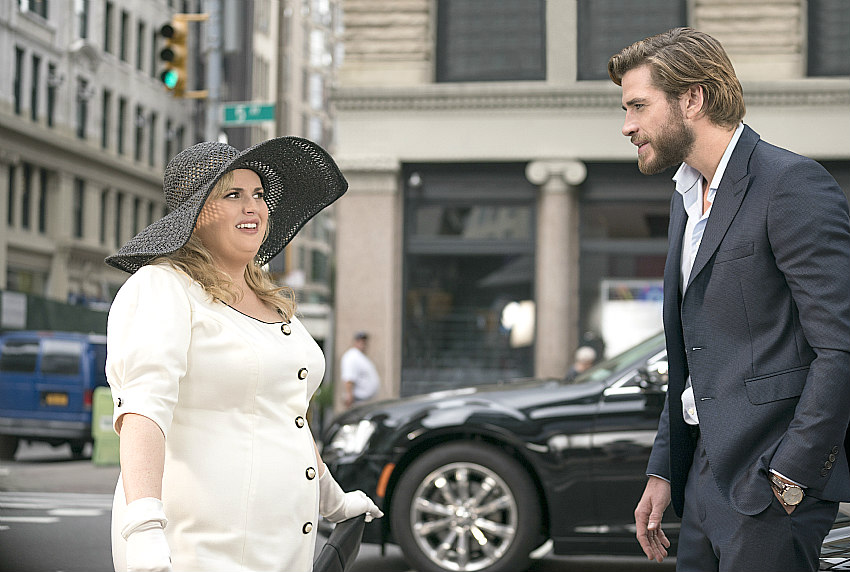 Liam Hemsworth, in the film, calls her “beguiling” and the script then reveals he doesn’t really know what that means. He becomes Rebel’s love interest in a sort of parallel universe that she finds herself in after a bonk on the head in a subway mugging. Suddenly she lives in a large apartment with a huge closet and shoe collection, in New York that is suddenly colorful and smelling like lavender. At work, where she’s not recognized as the star architect she is, standard romantic comedy characters exist. Besides Liam as a rich developer, there’s a nice guy she doesn’t realize is in love with her and a woman with a competitive hate on her. There’s also a gay man in the film who offers wise advice. The script has fun with all the tropes of films like these. It even starts with a clip from Pretty Woman. Rebel’s character as a young girl is watching it and told by her mother that life can’t be like that for her. Part of the implication is that she’s too chubby for that. It neglects to follow up on that or most of its insights and settles for a spot somewhere between a trifle and a waste of time. (International Village, Marine Gateway and suburban theatres) 2 ½ out of 5

JUST FOR LAUGHS FILM FESTIVAL: You've surely noticed that there's a big comedy festival happening here in Vancouver and that for the second year they've added a film festival to it. Most of these nine movies have not played here before and judging by the four I’ve seen, they’re a mixed bag.

I gave high marks to Thunder Road when it played here in October. It’s very funny about a hapless Texas cop and screens Monday. Tonight’s opener, Family, which I haven’t seen, has also been getting very complimentary reviews. Naturally, it’s about family discord, a favorite comedy target.

I enjoyed Sorry For Your Loss for its very dry humor, 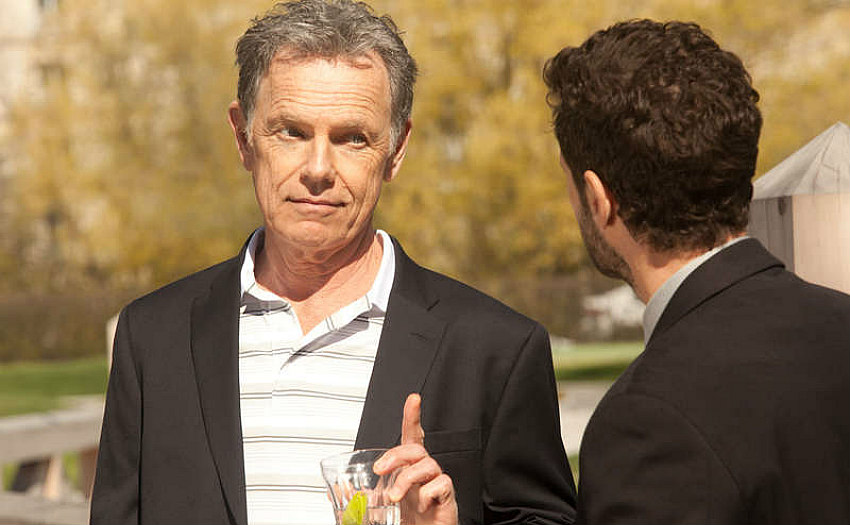 Bruce Greenwood’s snappy performance and Justin Bartha’s low-key role of a man complying with the last wishes of his just deceased father. He’s to scatter his ashes on the football field where the Winnipeg Blue Bombers play. His mother (Lolita Davidovitch) and Greenwood know part of the reason, but after a series of set-backs, a very funny real story comes out. It’s not art, but it’s fun.

So too with Pork Pie, a film from New Zealand with an interesting history. It’s a re-make of a national classic, directed by, Matt Murphy, the son of the man who made the original back in 1981. You’ll find reviews saying it doesn’t match its spirit. I don’t know about that but I like the speedy energy throughout.

Three young people, a writer fleeing his own wedding, a kid who may be a car thief and a woman escaping the burger joint she works at, go on a wild ride in a Mini Cooper, all the way from the north island to the bottom of the south, through several elaborate police-car chases and on to national hero status as TV news follows them like some white Bronco. There’s a wonderful anarchic feel to this one. It plays Saturday night. It plays Monday night.

I Killed My Husband, a Spanish and American co-production, in Spanish, is my least favorite. It features a couple of superstars, Maria Conchita Alonso and Assumpta Serna, in a weak comedy. A woman accidentally shoots her husband and then has to pretend everything is alright. She’s hosting a chic garden party to celebrate an award he has just won and repeatedly has to deal with guests and her own daughter asking where he is. A good idea but unsubtle, unusually verbose and as raunchy as some Hollywood teen movies.  It plays Monday night.

The films play at the VanCity Theatre and you can find more about them and the rest of the comedy festival at  http://www.jflnorthwest.com/