Expendables 2 is a blast, ParaNorman is beautifully animated, Whitney Houston sings her last and Sugar Man is a real find 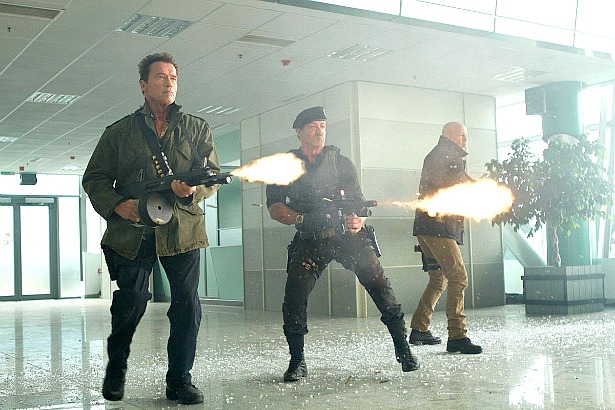 The boys are back in town. Arnie, Sly, Bruce and more make some noise in The Expendables 2

Timothy Green, ParaNorman and Sugar Man deserve some attention this week but I suspect Stallone, Schwarzenegger, Van Damme and Norris will be grabbing most of it.

The Odd Life of Timothy Green: 3

THE EXPENDABLES 2: This one will have you pondering one of the big questions once again. Why are big action movies so much fun?  The good ones, that is. Realistically we should know better. They’re usually improbable, often boneheadedly dumb (Expendables 1 certainly was, this new one is less so) and occasionally even dangerous. Witness the machine gun battle in an airport waiting room. Outrageous. And yet most of the film is an exhilarating ride with a who’s who of 1980s action stars showing that, like old rock and rollers, they still have the stuff.  And they can joke about their image.

Sylvester Stallone, with Jason Statham at his side for today’s younger fans, leads a couple of soldier of fortune missions  that include or encounter  Dolph Lundgren, Jet Li, Terry Crews, Chuck Norris,  Bruce Willis, Arnold Schwarzenegger (a bigger role than those two minutes he had in the first film) and …

…  most welcome, Jean-Claude Van Damme, who I’m told still has a condo here in Vancouver. He’s wonderful as a smooth and super-cruel villain and nails the final showdown with Stallone. They go at it with fists and kicks and, like gladiators, chain against knife.  Simon West, who years ago directed one of my favorite dumb action films, Con-Air, choreographs the fights, explosions, chases, and tough-guy strutting into an enjoyable romp. There are short pauses to mull over lost loves and the futility of war and then back to work. The plot, should you care, involves weapons-grade plutonium stashed in Albania.  (Scotiabank, International Village and many suburban theatres)    3 out of 5

SEARCHING FOR SUGAR MAN: I’ve been to a lot of folk music festivals where old blues guys were brought back from obscurity to perform again. The story of Sixto Rodriguez is as good as any of them. He made a couple of albums in the 1970s with songs about poverty, injustice and inner-city life. “Bob Dylan was mild compared to this guy” says one man in this fascinating documentary. He sold about six copies, according to a label boss, and promptly disappeared. Except, over there in South Africa. Behind the international boycott, he was a big hit, was heard by young Afrikaaners on mostly bootlegged tapes and inspired part of the anti-apartheid movement. He didn’t know any of it. Rumor had it he had committed suicide in despair.

A South African journalist set out to find out how, why and when and after a long search has one of those eureka moments when he’s told Rodriguez is alive. In Detroit, living modestly, renovating houses, dabbling in local politics. Before long he’s on tour in South Africa, playing to arena-size crowds who know all the words to his songs. The film gets across a remarkable sense of discovery and wonder, although it does seem to amp up the drama just a bit. There’s no mention that he had previously enjoyed a brief re-discovery in Australia. Still there’s a compelling story in the detective work that found him again and in the back-from-the-dead success that resulted. The title is from one of his best-known songs. (International Village) 4 out of 5

PARANORMAN:  I wouldn’t take a young child to this one. It’s far too scary in places. Ghosts and zombies pop out and menace in throbbing 3D. Teens and almost teens, sure, if you explain to them that this animated film is actually cool and that Coraline, the last one from these people, was nominated for many awards including an Oscar. Teens will respond to the central story line: about a boy nobody listens to and most everyone labels label weird.  He claims to talk to ghosts, you see, including his late grandmother sitting there on the couch watching TV with him. Only another outsider, chubby Neil, dares to be his friend. 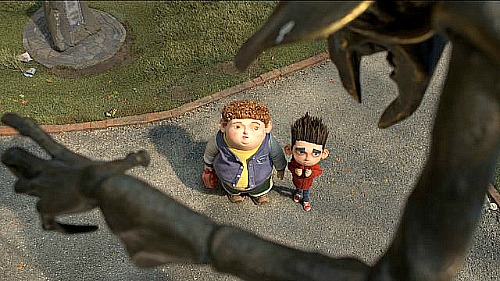 Norman has a huge task thrust upon him. He has to save his New England town from  zombies; seven of the dead who will rise again on the 300th anniversary of a witch trial. They’re victims of a curse put on the town by the young woman convicted that day. Norman has to elude them and get to her to stop her vengeful spree.  Beautiful stop-motion work (from the Laika studio in Oregon), an apparent appreciation for 50s monster films and lots of irony and whimsical humor make this a special film.  Kodi Smit-McPhee, Anna Kendrick, Casey Affleck and John Goodman are the lead voices.  (5th Avenue, International Village and many suburban theatres)  3 ½ out of 5

THE ODD LIFE OF TIMOTHY GREEN: If you really think about it, this is the kind of movie that shouldn’t work at all. It’s far too fanciful, completely unrealistic and cloyingly sincere. And yet the actors perform it so well, that it does work. It’s got heart, compassion and a feel-good vibe that’s completely out of step with most of the films that come along these days.  So, beware. It’s not for everybody. 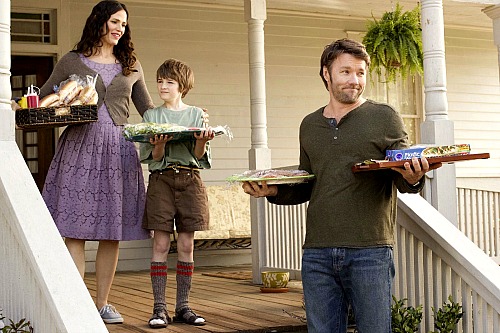 It’s not just a family film. It’s a fable, about the idea of family, written by Frank Zappa’s son Ahmet. A couple (Jennifer Garner and Joel Edgerton) who can’t have children themselves, tell an adoption official their story to show why they would make good parents. They wrote down all the characteristics of a perfect child (including “honest to a fault”), buried them in a box in the backyard and next day found a big hole in the garden and a young boy in their house. He’s got leaves growing down around his ankles but he’s friendly and immediately calls them mom and dad. The film dwells on the details of parenting, especially the mistakes born of over-eagerness, and promotes tolerance and accepting differences. Young love, mortality and a looming shutdown at the local employer, a pencil factory, also figure in this heartwarming but not quite tear-jerking film.  (International Village and suburban theatres) 3 out of 5

SPARKLE:  The 1976 original has its admirers as a “modern black classic.” This remake will be known simply as Whitney Houston’s last film. And also maybe her last song, a powerhouse gospel number called ''His Eye Is on the Sparrow'' that she belts out with a church choir rattling the walls behind her. She plays a single mother trying to keep three daughters in line, in the church and out of trouble while they get involved in the Detroit music scene.  She’s a no-nonsense controlling mom tossing out orders and winning heated arguments. Except for a slightly raspy speaking voice, Houston is (was) in good form. 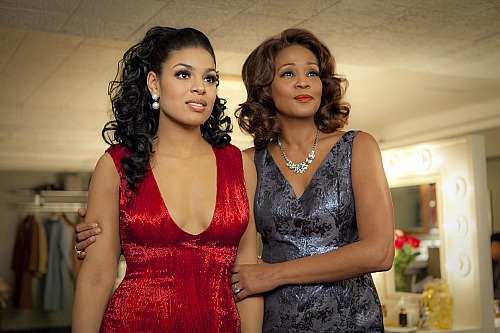 The bulk of the story is with her girls, who form a Supremes-like a singing trio. Sparkle is the creative one played by American Idol winner and now recording star Jordin Sparks. One of her sisters is brainy; the other a golddigger and sexy lead singer. That attracts a dodgy comedian and bon vivant (Mike Epps, charismatic) who moves her into his place, turns her on to drugs and slaps her around. In a supreme line of irony Houston asks “Was my life not a cautionary tale for you?”  She’s classy, the girls are fine as actors and singers and the film is lively and glossy, although dragged slow at times by the general familiarity of the story.  (International Village and a few suburban theatres) 2 ½ out of 5

2 DAYS IN NEW YORK: Five years after writing, directing and starring in 2 Days in Paris, Julie Delpy repeats herself. And I do mean repeat.  She’s concocted another hour and a half of culture clash, this time facing the other way. Instead of Americans visiting France, the French descend on the U.S., well, a small part of it, Delpy’s Manhattan apartment. 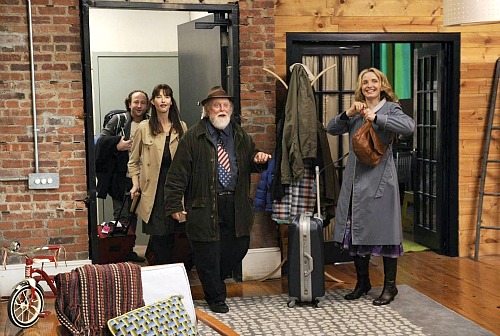 She’s Marion, a photographer and artist and that’s her real-life father Albert Delpy, playing her dad. He arrives with her (fictional) sister who, in an unwelcome surprise, also brought along her boyfriend.  Unwelcome because he used to bed Marion and proudly proclaims that he gave her her first orgasm. The jokes flow with that kind of crass tone.  Dad wonders if the apartment has a private spot where he can masturbate. The sister is an exhibitionist. The French don’t come off well and Marion’s new boyfriend is quietly shocked. He’s played by Chris Rock who should be used to that style of humor considering the films he’s been in. Justifiably he’s annoyed.  So are we because as a comedy this isn’t very funny, or insightful. A sub-plot of Marion’s soul put up for sale at a gallery is merely strange.  (5th Avenue) 2  out of 5

NOTE: The images are movie stills provided by the studios and are therefore the exclusive property of their copyright owners.

On the Job
Doug McClelland

Film reviews: We Need To Talk about Kevin, listen to Chico and Rita, get out of the Safe House and take a journey to a Mysterious Island