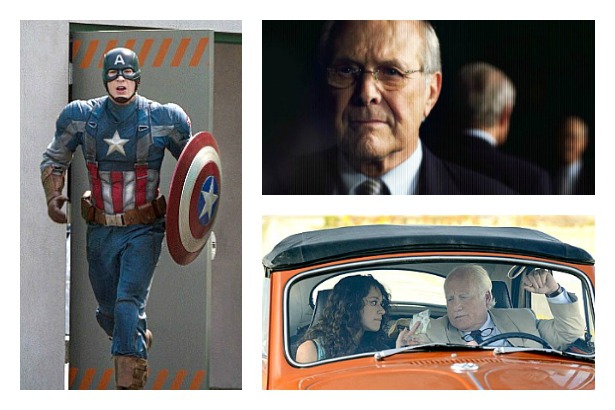 The Marvel universe is expanding again with a third visit by Captain America. Not for you? How about a celebrated film that never got made, visits to the Middle East and South Africa or checking out two Canadian films and our best-known director.

The films of David Cronenberg:  various

CAPTAIN AMERICA: THE WINTER SOLDIER:  I was surprised to find out that this is already the 9th film from Marvel, the comic book people, and the third with the Captain. He arrived three years ago in a lackluster outing set in World War II and was brought into our time in last year’s summer blockbuster The Avengers. Without aging, mind you. He’s back for more, still blandly played by Chris Evans and still searching for how his old values of honor and sincerity fit into today’s world of surveillance, deceit and amorality. Sounds promising, I know. Doesn’t deliver much though, except for a great deal of big-scene action. With a too-long running time of 2 ½ hours it gives you ample opportunity to see how repetitive it is. There’s a major fight every few minutes, usually much like many others you’ve seen before. Even the Winter Soldier is a bit of a cheat. He appears now and then to glower menacingly, gets in one fight and is then set to come back in a future movie.

What we do have that’s notable is a story that could have come from one of those paranoid thrillers from the 1970s, particularly Three Days of the Condor, and its star, Robert Redford, playing absolutely against type here. He heads the World Security Council and is willing to cut back on personal freedoms to achieve that security. As he puts it: "To build a really better world sometimes means tearing the old world down." No common comic book villain is he. He’s a modern politician. However, the film doesn’t stay on that level for more than a few minutes at a time. There are many fights to be staged; car chases to be held;  S.H.I.E.L.D. is attacked; Nick Fury (Samuel L. Jackson) is shot; Hydra, the Captain’s enemy from World War II, is back and Natasha, a.k.a. Black Widow (Scarlett Johansson) breezes around to be followed and lightly flirted with. The good stuff is obscured in all that clutter.  (The Dunbar, Dolphin, Scotiabank and pretty well everywhere) 3 out of 5

THE UNKNOWN KNOWN:  In The Fog of War, crack documentary maker Errol Morris got Robert McNamara to admit his regrets over the Vietnam war that he ran as Secretary of Defense. So, there was great anticipation over what he would get from Donald Rumsfeld who had the same job during the Iraq war. He got nothing. He let him off the hook. He rarely asked follow up questions or challenged him. Rumsfeld proved slippery, avoiding or recasting questions, following nifty deflections with a smug smile.

The title, of course, is from one his most famous performances when he dodged a question in a press conference about proof of Saddam Hussein’s weapons of mass destruction.  He explained that there are known knowns, but also known unknowns, unknown unknowns, and even unknown knowns, "that is to say things that you think you know that it turns out you did not." Similarly, he plays with words and semantics to Morris and it’s a fascinating show. He’s always been an entertaining obfuscator.

The U.S. doesn’t do assassinations, he says. Morris doesn’t cite cases that are well-known. The U.S. doesn’t torture. Morris doesn’t cite evidence he collected for his film Standard Operating Procedure. (A Senate report blasted the CIA on the issue just this week.) Morris does get a few blows in by juxtaposing news clips with Rumsfeld’s answers but mostly lets him show that despite a professorial manner he really doesn’t think too deeply. Danny Elfman music and at times heavenly choirs dress up the session. (VanCity Theatre) 2 ½ out of 5