The Butler, In a World and The Spectacular Now shine, while Jobs underwhelms

He’s found passed out one morning by the somewhat plain but sweet Aimee, played by Shailene Woodley of TV’s The Secret Life of the American Teenager. She’s got it together, reads science fiction and gets good grades. But she’s an innocent and he’s usually attracted to sexy women.  A relationship develops though as she tutors him in geometry and he coaches her to stand up to her mother. When both go off to look up his estranged father he comes to an unsettling realization of why he is like he is. The film traces the threads in this story with an easy manner, considerable wit and real human feelings. Nothing is contrived and it comes across as an honest look at one stage of our lives. The acting by the two leads is completely natural and they have a sex scene that’s remarkable for both fumbling sensitivity and heat.  (Fifth Avenue) 4 ½   out of 5

KICK-ASS 2:  The first one was a hit three years ago; this one is slightly better. But it’s also more of the same, a comic-book story about the tendency of some people to act like superheroes. Generally that means patrolling the streets at night and not much more. Here, characters repeatedly get into fights which caused Jim Carrey to denounce the film’s violence. It would have been better if he had done so before he acted in it and got paid. Also the violence is hardly extreme.

Kick-Ass (Aaron Taylor-Johnson) and Hit Girl (Chloë Grace Moretz) are back and part of a small band of costumed crime-fighters celebrated at one point in high school terms as “the ultimate clique.” Carrey, as an army colonel called “Stars and Stripes” is also a member.

On the other side, a super rich kid (Christopher Mintz-Plasse) with the M-F word as his moniker and extreme over-acting as his style, organizes a band of rather silly super-villains  and the battles are on. Too many, actually, most of them chaotic melees. Even then, much of the film is a high school comedy with Hit Girl’s real-life counterpart, Mindy McCready, taking snide abuse from some mean girls and getting some gross revenge.  The film is full of callous, smart-alecky humor that adolescents will laugh at. Others should be wary. (Scotiabank, The Dolphin and many suburban theatres) 3 out of 5

JOBS: What was Steve Jobs to the computer industry? Larry Ellison, the head of Oracle, said this: “He was brilliant. I mean, our Edison. He was our Picasso.” Not much of that comes through in this biopic which feels incomplete and muddled. We get the basic facts, yes; his vision of a home computer, its creation by his pal Steve Wozniak, the introduction at a computer fair and the eventual rise of the giant Apple Corporation. Also Jobs’ ouster, then return, and right up to the debut of another brainchild, the ipod (which starts the film). But what of his monumental fight with Bill Gates? It’s reduced here to some shouting down a telephone line. What about his Buddhism? His personality? He’s portrayed as an asshole but less of a one than his reputation would have it. 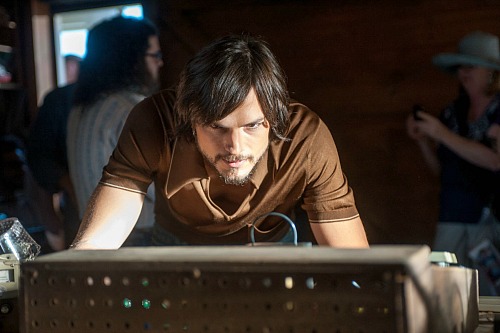 What we get here is a suspiciously favorable portrait. His dark side, including rejecting his daughter, is too well-known to be left out but it seems to be minimized. And Asian sweatshops and European tax avoidance? Don’t look for them here. They’d spoil this picture of a visionary driven to improve our lives. If you haven’t read his book, this is a good but basic introduction and Ashton Kutcher, hardly anyone’s favorite, does a credible job of impersonating him. The era (1971-2001), the clothes and the technology of the time are perfectly envisioned. It’s just that the whole project feels superficial. (International Village and some suburban theatres) 3 out of 5

PARANOIA:  This one is mis-named because there’s little tension and no paranoia in it. There’s a pretty good story about industrial espionage and electronic surveillance but not much to have you on the edge of your seat.  There is a good example of a trend I appreciate, writing current gripes into otherwise standard stories. In this one listen for the American dream hijacked by financiers, CEO’s unconscionable bonuses, low entry-level pay and more. They’re  tiny grace notes in a tale of two high-tech giants competing ruthlessly. 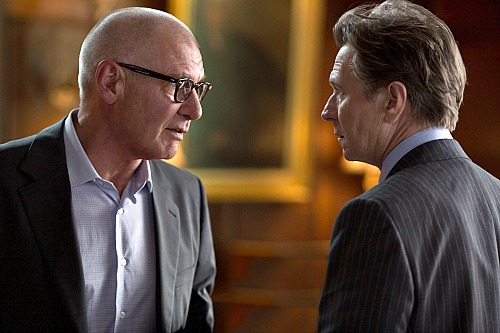 It’s Gary Oldman vs Harrison Ford. They used to be partners. Now Oldman wants the specs for a new cell phone and sends an ex-employee (Liam Hemsworth), who he drove out of his company and then re-hired, to get them. Liam picks up a woman in a club (Amber Heard), beds her and then finds she works at Ford’s company. What’s more, her laptop has what he needs. The film is slick, gleams with high-chrome design and it’s reasonably entertaining to watch the intrigue play out. There’s constant electronic surveillance that outdoes even the government and prompts Ford to mutter: “Privacy? Absolutely not; no such thing.” There’s also a surprise twist. It’s just that getting there lacks excitement. (International Village and many suburban theatres) 2 ½ out of 5