MUCH ADO ABOUT NOTHING:  So what do you imagine the director of TV’s Buffy the Vampire Slayer and last year’s massive hit movie The Avengers would do with a Shakespeare play? Surprise. Joss Whedon plays it straight and sends us a brilliant film version. He stocks the company with actors he’s worked with on his various TV shows. For instance, Amy Acker and Alexis Denisof, who play the lead characters Beatrice and Benedick, also played lovers in the show Angel. Clark Gregg (Leonato) you’ll recognize as Agent Coulson from The Avengers and other Marvel comics films. 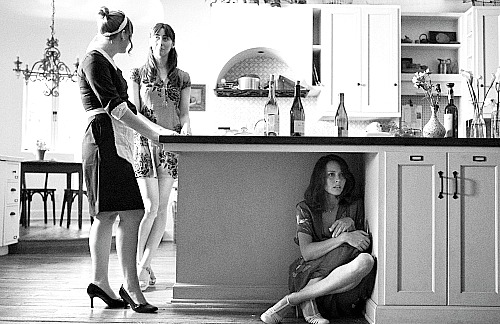 Whedon brought them all into his own house and over 12 days filmed the play (trimmed a bit, I think) in black and white and modern dress but using the proper dialogue. For a while it’s odd to hear people dressed in business suits and carrying cell phones speaking lines like “I would my horse had the speed of your tongue.” Or to see the play opening with two lovers waking up together in bed. But the repartee, the bickering and the witty dialogue in general soon carry away the doubts. The actors bring a buoyant lightness to the language and entertain superbly. The tale of gossip, deception, gender and marriage lives. (5th Avenue) 4 ½ out of 5

CAESAR MUST DIE:  Another modern take on Shakespeare comes from Italy’s Tavani brothers, Paolo and Vittorio, famous for films like The Night of the Shooting Stars. This one is shot in a maximum-security prison near Rome with Mafioso, Camorra types, killers and thugs playing the roles. A drug dealer plays Caesar.

We see them rehearse (in black and white) and then perform the play (in color). It’s now only 76 minutes long and the actors drift out of the bard’s language now and then and into their own. But at the same time, because of their lives, they understand the treachery and the power struggles the play depicts.  It rings brutally true when Caesar says “You as well Brutus, my son?” and when the conspirators run through the prison shouting “Freedom.” And most moving when one inmate tells the camera “Ever since I discovered art, this cell has truly become a prison.” Powerful stuff by amateur actors. In Italian with subtitles.  (Van City Theatre, starting Mon June 24. Check the website: http://www.viff.org ) 3 ½ out of 5

Will be playing in tandem with …

AN OVERSIMPLIFICATION OF HER BEAUTY:  I’ve never seen a film like this one before. It’s a young man’s musings on what went wrong in his relationship with a woman (the title refers to just one of his mistakes) but done like an instructional video.  A narrator (TV actor Reg E. Cathey)  analyzes everything he did wrong. Then just as a lovelorn type might mull it over and over, so does the film, offering an extra detail or two each time.  Periodically, the story cuts away to another film, a short the young man made secretly and then screened for the woman and other guests in a movie theatre.

And there’s more odd stuff, sometimes obscure, sometimes quirky and off-track, sometimes with a Guy Maddin-like surrealistic feel.  Every once in a while the film switches to animated sequences propelling a statement about decisiveness and not “hiding from your faults.”  Brooklyn-based Terence Nance wrote, edited, directed, produced, scored and stars in it, and yet it doesn’t come off as a vanity production. Just low-budget imagination running free. Repetitive at times, but free. Also cool and fun. (VanCity Theatre starting Mon. June 20).  3 ½ out of 5

BEST OF HOT DOCS:  Every year the Toronto festival sends some of its best titles on tour. Seven of these films are playing through the weekend at the VanCity Theatre and judging by the three I’ve seen, it’s a strong line up.

At the top, in my mind, is TERMS AND CONDITIONS MAY APPLY which told all about the US government’s internet, social media and telephone surveillance before Edward Snowden kicked off the current brouhaha by leaking information. Obama assures “Nobody is listening to your telephone conversations”.  Maybe, but its startling how much can be gleaned from telephone records the National Security Agency can demand from the phone companies. This film says the Obama administration has made more such requests than all previous presidents combined. There’s much more that distressing here about Facebook, Google, and Twitter and their privacy policies that aren’t about privacy at all. 4 ½ out of 5

ANITA revisits the incendiary testimony law professor Anita Hill gave at Clarence Thomas’s 1991 confirmation hearing for the Supreme Court. She told of sexual harassment, sex talk and allusions to “Long Dong Silver” when she worked in his office years before. In recent interviews and speeches she tells how hard that appearance was on her but also how the support she got from women changed her life and the public’s understanding of sexual harassment.  4 out of 5