It’s a western of sorts, set not long after the Civil War. Two bounty hunters (Samuel L. Jackson, Kurt Russell), a prisoner (Jennifer Jason Leigh), two other men and two bodies arrive by stagecoach to sit out a blizzard at a roadhouse. By then, we’ve already spent a half hour watching them argue in Tarantino’s glib and stylized dialogue about true vs frontier justice. Now they join a grumpy old general (Bruce Dern), a voluble Englishman (Tim Roth), a bitter cowboy (Michael Madsen) and a timid Mexican (Demián Bichir) for hours more (and often nasty) chatter. Also a mystery, who poisoned the coffee and why? And who can stay alive the longest? Jennifer gets an elbow to the mouth, blood spewed on her face and other painful assaults. Jackson gets off one of the nastiest stories ever. No one is enobled in any way. But Tarantino indulges himself by sending this out as a three-hour epic, in extra-wide screen, with an overture and an intermission. Film like Ben Hur and Spartacus used to get that, but they were spectacles. This film is mostly set in one room. The first half is all talk (fans get bored); the second starts with a promising flashback and then descends into gross violence. What for? A 20-minute shorter version is coming next week.  (Park Theatre) 2 ½ out of 5

CONCUSSION: It’s the hottest issue in sports these days. Just two days ago, $16 million in grants were handed out in the U.S. for research into it and less than a month ago BC’s Health Minister said there’s no plan here for legislation like Ontario has brought in. The subject is the long-term effect of repeated blows to the head in contact sports. It’s a big concern both on the pro level and in youth sports. Where did this come from? This film shows where but with less uproar than you’d expect. 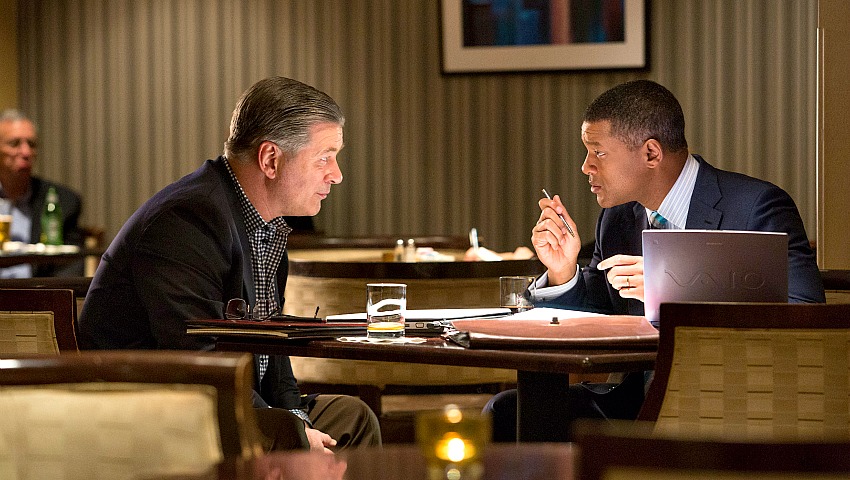 Will Smith plays Dr. Bennet Omalu, a Nigerian immigrant working as a pathologist in Pittsburg when a revered former football player committed suicide after years of erratic behavior and homelessness. Omalu did the autopsy, didn’t rush it as told but detected odd abnormalities in the brain. He examined other victims and with encouragement from his boss (Albert Brooks) and a former team doctor (Alec Baldwin) gave the syndrome a name – chronic traumatic encephalopathy, or CTE—and published his results.  All three men were consultants on the film so I believe most of it although it seems a stretch when the film shows the National Football League and even the US government coming after them. The tone stays sensibly informative and a bit dry throughout. Smith puts on a perfect Nigerian accent to play the rather reserved doctor.  Gugu Mbatha-Raw plays his future-wife, probably to humanize him though showing his private life is hardly necessary here. The story is strong on its own. (International Village and suburban theatres) 3 out of 5

POINT BREAK: A much loved cult film from the 1990s, with Patrick Swayze already a star and Keanu Reeves about to become one, is re-made for our time. Edgar Ramirez and Luke Bracey take their place  and the bank-robbing surfers are now enthusiasts of extreme sports of all kinds. Motocross, snowboarding, wingsuit flying, rock climbing, and surfing the largest waves ever seen. They’re all here. 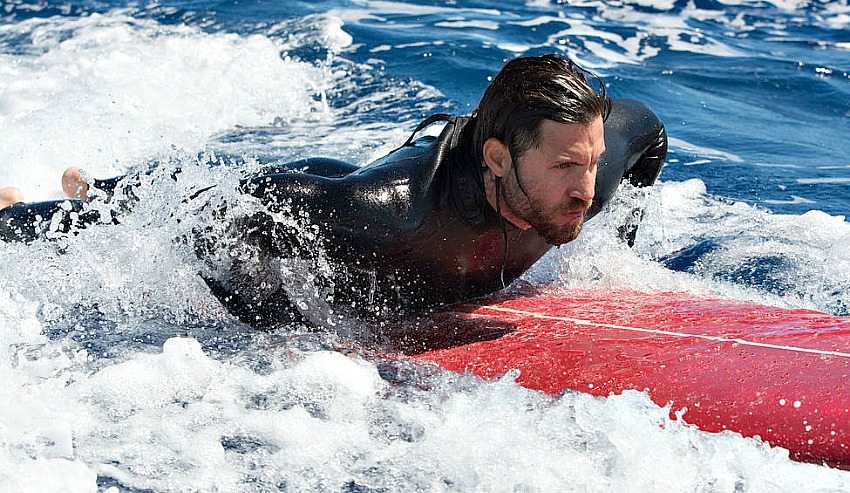 A couple of problems though. They’re all here too long. Ericson Core, the director is a cinematographer. He puts up those pictures much longer than we want them. There are too many sports and as the film goes through them one by one it becomes tedious. The story loses us because it stops being clear. Bracey, as Utah, joins the FBI, infiltrates the gang of extreme sports guys and befriends their leader, Bodhi  (Ramirez) to learn why he’s acting like a Robin Hood figure attacking multinational companies and rewarding poor people. A quasi-mystical search for enlightenment by completing an eight-leg extreme sports ordeal  is somehow involved but the help-the-poor motivation drifts away. Sending a rock-slide down on an open pit mine doesn’t qualify in my mind. Though the film is virile and the sports are stunning, that background gets confused. The original had a quirky charm. This one is somber and far less fun. (Scotiabank and suburban theatres) 2 ½ out of 5

DADDY’S HOME: Maybe it’s a case of writing what you know but so many family films from Hollywood these days are about divorce. This comedy seems to put a new twist on it. Will Ferrell plays a radio-station executive and a stepdad to two kids. He’s doing a good job at both until his wife’s ex (Mark Wahlberg) shows up and wants to re-connect with his children. Competion ensues between  sensible dad and good-time dad. I haven’t seen it but have heard it’s quite good, and much more family-friendly than your usual Ferrell or Wahlberg movie. (International Village and suburban theatres)