Queen Anne (Colman) is on the English throne fretting over war or a peace treaty with France and whining about both her gout and her inability to bear children. Her 17 pregnancies have failed and she’s got 17 pet rabbits instead. She’s sleeping with her chief advisor (Weisz) until an ambitious country girl (Stone) works her way up from maid into the Queen’s bed. The Tory leader in Parliament (a preening and over-wigged Nicholas Hoult) latches on to her to talk the Queen into ending the war, so as not to have to raise taxes for it. There’s a lot going on and they all, especially Colman, play their characters excellently. And there’s enough weirdness in that story to satisfy even Lanthimos, I would think. (The Park and suburban theatres) 4 out of 5

SECOND ACT: Career-minded young women can easily enjoy this one as long as they can forgive a startling plot twist that almost splits the whole film in two (for a while at least) and as long as they don’t mind being manipulated by the emotional flips that come along. That common dilemma –career or family—starts the story, then disappears under larger ones –denied promotion at work and job-hunting under false pretenses—and then gets crowded out by an even bigger, improbable one. I won’t spoil it for you except to say that a late explanation doesn’t really fix it. 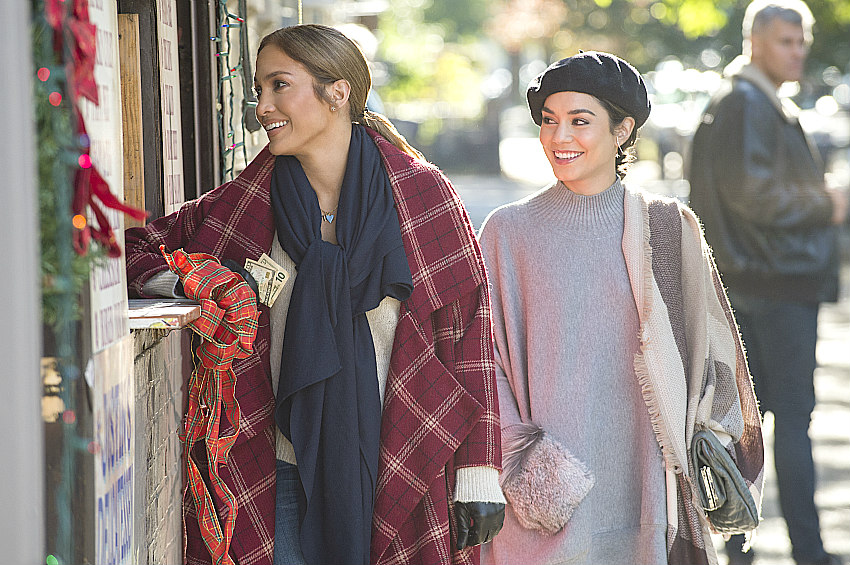 Jennifer Lopez (in her first movie in three years) plays a woman whose good work at a discount store is not recognized.  She gets a try-out at a cosmetics company thanks to a fake on-line profile created by her godson. There, she’s in a race against the boss’s daughter (Vanessa Hudgens) to develop a new “green” skin-care line. The contest takes on more complications than it can handle and the film changes course again. Lopez and Hudgens are both warm and appealing in their roles and their message for young women is positive: it’s only your fear that holds you back. Other than that, this film is very light. (International Village and suburban theatres) 3 out of 5

BEN IS BACK: Not really holiday season fare, but maybe it is, because it does take place on Christmas Eve. That’s when Ben (Lucas Hedges) returns from drug rehab and shows up unannounced at his family’s home. His sister (Kathryn Newton) and his stepfather (Courtney B. Vance) are not happy to see him. Mom (Julia Roberts) is pleased but she’s about to find out more about him than she ever knew. It’s a story that will resonate with parents of young drug addicts. 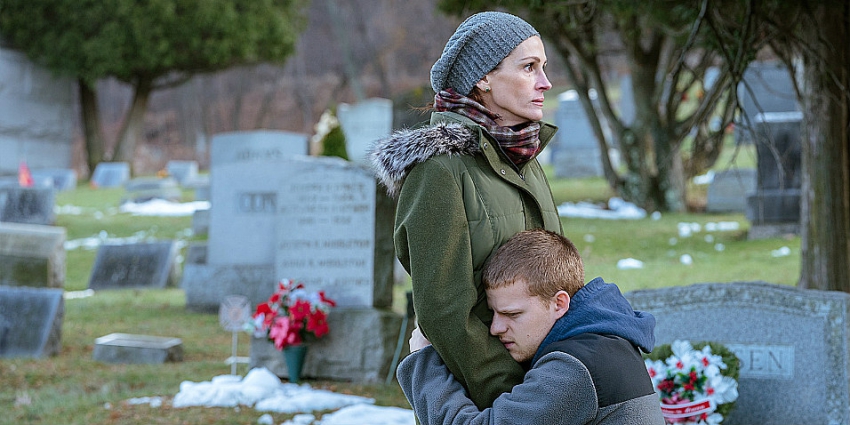 It’s not extreme, it’s rather on the safe side, but it probably will affect you. Hedges is a likeable actor (remember Manchester by the Sea, Lady Bird and others) and you don’t expect him to get really evil. His friends, maybe. The family house is broken into, the pet dog is gone and mom and son go out to find it. Tension builds as they get to a grim neighborhood, a drug house and an AA meeting. The tour not only reveals much to mom about her son but also tests her ability to maintain her love. Julia Roberts shines in the role. So does Hedges who under the direction of his dad Peter subtly brings out powerful emotions of shame and pretense that he’s got his life under control. (International Village) 3 ½ out of 5

WELCOME TO MARWEN:  Almost eight years ago, this true story was told in a fine documentary. Now Robert Zemeckis has re-imagined it into a drama that’s not nearly as engrossing. The problem is, the tale is so bizarre about one man’s fantasy adventures that visualizing them makes them feel less real. A movie. Not actual mental health problems afflicting Mark Hogancamp, well-played by Steve Carell. He’s an upstate New York man, a former comic book illustrator, who was severely beaten outside a bar, went into a coma and had no memory when he came back out. For self-therapy he created an elaborate diorama in his backyard of a World War II battle in a Belgian village. His photos were art; bringing them to life with guns blazing, jeeps charging and actors remade to look like action figures is fascinating to see, but not forever. The film is heart-felt but drags later on. The script adds two stories to show the strains on Mark’s damaged psyche. Will he brave a trip to court to speak at the trial of his attackers? Will his attraction to the pretty woman (Leslie Mann) newly moved-in across the street lead to anything? They’re the hub of the movie, but are repeatedly upstaged by the battle scenes; Nazis shooting from a tower, a band of women soldiers firing back, Cpt. Hogie, as he calls himself, in the middle of it. And then there’s his fetish for women’s shoes. Hard to integrate that. The film was made around here, including Surrey and Maple Ridge. Look for a few Canadians in the cast, like Veena Sood as a judge. (International Village and suburban theatres) 2 ½ out of 5