After Earth, Now You See Me, a new documentary with Roméo Dallaire and four other films reviewed

A young girl describes her abduction into the infamous Lord’s Resistance Army and her hate for its leader, Joseph Kony. The most fascinating story is from a father who organized his neighbors to mount a counter-attack at night and rescue his two sons. They had been kidnapped that afternoon while eating mangoes. Dallaire says “Today there are no noble causes” for these armies. They’re now just bandits. He speaks calmly through most of the film but listen to the outrage in his words.  And there’s a telling scene in New York after a Fox News interviewer tells him children like these are hardly innocents. Their tough life in Africa takes that out of them by age three. For once, the retired Lt. General  lets a bit of his real anger seep out. (The Cinematheque) 4 out of 5

AQUI Y ALLA: Careful.  Some friends who saw this at the film festival last fall reported it is just too slow for them.  It started the way for me too but once I got into its rhythm I saw it as emotional and spellbinding.  It shows the Mexican illegal immigrant issue from the other side. We see the pressures that push people to run to the U.S. through the story of one man who’s come back. Pedro was in New York with a small musical career but obviously homesick. The reunion with his wife is uneasy (she feels he “had someone there”) and his two daughters laugh at the music he recorded. His efforts to form a new band don’t go well and he can only get a short-term job, demolishing buildings. Then his wife has a difficult birth requiring an expensive hospital stay. It’s melodramatic, yes, but with a natural atmosphere and a sympathetic portrait of one man’s struggles. There title means Here and There.  (Cinematheque)  3 out of 5

PIETA: Violent revenge. A mother’s love. Some of the Korean films I’ve enjoyed dealt with one or the other. This one gives us both and it’s a spellbinding stew of mystery, hard-scrabble living and the sociopathic behavior that often results and feeds on it. Director Kim Ki-Duk is known as a provocateur and true to form he pushes his themes to almost absurd levels inside a giant metaphor about “devil’s money.” If it’s not development pressures pushing hard on small businesses in a run-down area of Seoul, it’s the loan sharks they turn to if they want to survive. Kang-Do is one of their enforcers, an angry loner with a merciless collection method. He’ll maim those who can’t pay and take the insurance money. He whips one woman with her own bra but that’s nothing. Watch what he does when a woman arrives and says she’s the mother who gave him up when he was a baby and now wants forgiveness. 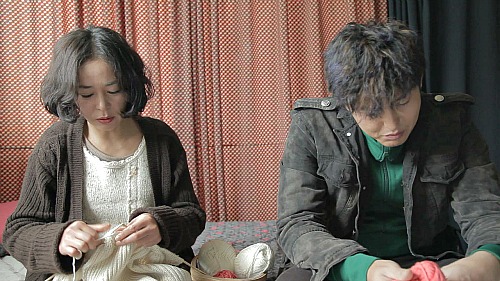 He resists (shockingly so in one scene) but she persists and gradually gets him to warm up. Is his life turning around? Remember, this is a revenge tale. The film heads to a surprise turn and gets ever more twisted and near-surrealistic on the way. There’s more violence suggested than seen but the film is still hard to watch at times because cruelty soaks into just about every scene. The acting is superb by Lee Jung-jin as the collector and Choo Min-soo as his “mother” and the film is leisurely but powerful. It won the top award at last year’s Venice Film Festival. (VanCity Theatre) 3 ½ out of 5

WRINKLES: A great film but who is it for? It won two of Spain’s top movie awards for its animation and screenplay but do young people want to see old people suffer encroaching dementia? For that matter, do old people? Too bad because this seems to be an accurate account of what may happen to most of us eventually, told with compassion and healthy amounts of humor. In other words, a friendly and ultimately heartrending look at what’s ahead. 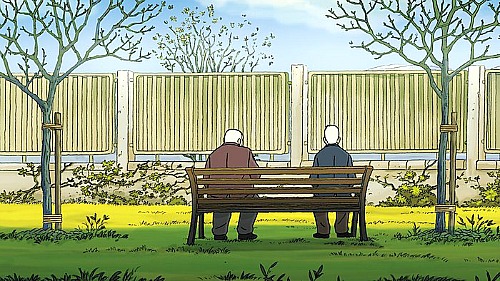 The story is set in a care home, to where Emilio, a retired banker, has been sent and where he becomes friends with Miguel, an unapologetic con man. He scams the other patients, who don’t seem to remember very long, and guides Emilio in the unspoken rules and the hazards of the place. The main one: don’t go upstairs. That’s where the lost causes end up. The two develop a bond and later have a falling out with dementia-driven suspicion. There is much more about connecting than declining. Meanwhile, we get a growing impression of the facility as a prison, although the old-style, fine-line animation stays colorful and bright. It’s based on a graphic novel and is sure to move you emotionally.  (VanCity Theatre, in Spanish with subtitles) 4 ½ out of 5

THE ENGLISH TEACHER: This one has come with no promotion that I’ve seen and no previews. But here are a few things I’ve found online. The story:  Julianne Moore plays a high school English teacher in Pennsylvania who tries to help a former student with his ambitions to be a playwright. He’s just back from New York where he didn’t make it and his dad (Greg Kinnear) is pressuring him to drop the idea. The teacher stages his “dark, angst-ridden play” at the school and endangers her career. The reaction: A lot critics say it’s not funny, but look at this, super grump Rex Reed likes it. “Thin as a poker chip but as clever as it is contrived,” he wrote.  (International Village)

NOTE: Images in this piece are movie stills provided by the studios. They are the exclusive property of their copyright owners.