The story is from a novel by the English journalist and BBC host Norman Lebrecht. A young boy sent from Poland, before the Holocaust, to England to live with a music teacher,  proves to be a violin prodigy but fails to show up for a concert that was to introduce him to the public. The teacher’s son is like a brother to him and has no idea where he went.  Thirty five years later, now played by Tim Roth, he tracks him down, finds him in Brooklyn, N.Y., now played by Clive Owen and now profoundly committed to the Jewish religion. The reason is slowly brought out, though not explored fully. The detective story takes up much of the film before culminating in an emotional visit to the memorial at the infamous Treblinka extermination camp near Warsaw. The film is the first allowed to shoot scenes there.  The song of the title is a memorial itself and is performed with high drama and at length. In its most effective sections the film invokes tradition, obligations and deeply felt loss. Other parts are flat and lackluster. (5th Avenue) 2 ½ out of 5

SPIES IN DISGUISE: Here’s a kids’ film for teenagers. They’ll get it; the little ones won’t. But will they want it? Not for sure, I’d say. There’s sharp dialogue and crisp animation but a plot below their self-image. It originated as a six-minute short, which seems an appropriate length for what is basically a one-joke endeavor.

Imagine a James Bond spoof that matches all the tropes: an action opening, a gadget scientist, a bad guy threatening the fate of the world and a suave self-assured agent ready to head him off. Then imagine the singular joke: he’s turned into a pigeon.

It happens to the animated Will Smith in an invisibility experiment gone wrong. Or right, in a way, because pigeons are everywhere and therefore pretty well invisible. Tom Holland voices the young gadget whiz; Reba McEntire, the agency boss, and Ben Mendelsohn, the bad guy trying to steal data to expose the identities of secret agents. Smith is accused of stealing it and Rashida Jones and even DJ Khaled are chasing him, but once he’s turned into a pigeon, Ben, as the bad guy, shape shifts to look like he used to. It gets very convoluted, hyper-active and loud and spouts easy maxims like “Evil doesn’t care that you’re nice” and some anti-violence messaging. Also pigeon-style toilet humor and few clever jokes, like the list of items required for a torture session: “a funnel, jumper cables and a Nickelback album!” (International Village, Marine Gateway and many suburban theatres) 2 out of 5

THE NIGHTINGALE:  As part of its current series of the best of the year, the VanCity Theatre has got a one-time screening of this Australian film which gained ecstatic reviews from the critics back in April but for some reason didn’t show up here. It’s directed by Jennifer Kent who made The Babadook a few years ago and got just as much praise for that one. Here she’s switched from psychological thrills to revenge. 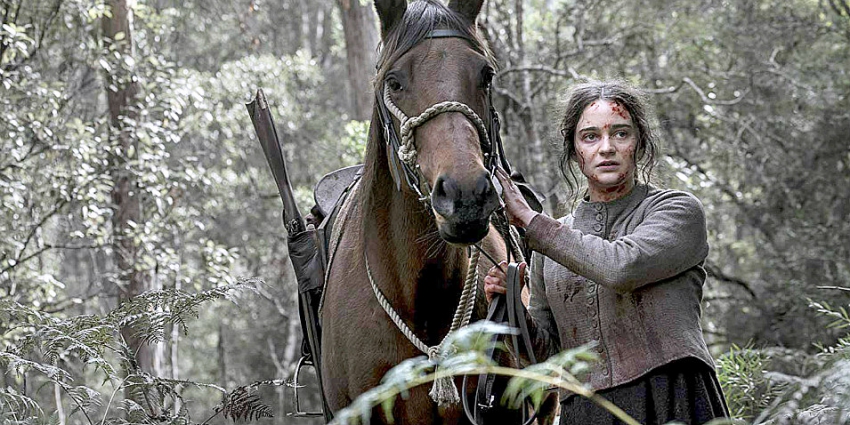 A young Irishwoman and convict (Aisling Franciosi) in Tasmania in 1825 is raped by a British army officer (Sam Claflin) and with the help of an aboriginal guide tracks him down for payback. “Unforgettable” and “essential” were some of the critics’ words. “Caution: contains scenes of violence that may distress,” says the theatre’s publicity. The film wasn’t available for me to preview. (VanCity, 9 pm, Saturday)

IP MAN 4: THE FINALE: Don’t count on it being the last. These films are very popular with the martial arts crowd and there’ll be a demand for more. That’s especially true since they also fight for Chinese national pride and may just offer a counterpoint to news out of Hong Kong. Ironically, the story started there but this film wanders over to the US. Ip Man is the kung fu master who taught Bruce Lee and as played by Donnie Yen not only takes on racists—marines, policemen and high school jocks—in San Francisco in the 1960s but adjusts his protégé’s image from Tarantinos’ Once Upon a Time … depiction. Here Lee is shown as noble and altruistic. I haven’t seen this film but judging by previous entries and new reports, fans get lots and lots of fighting action. (Marine Gate way, Metropolis and Riverport)