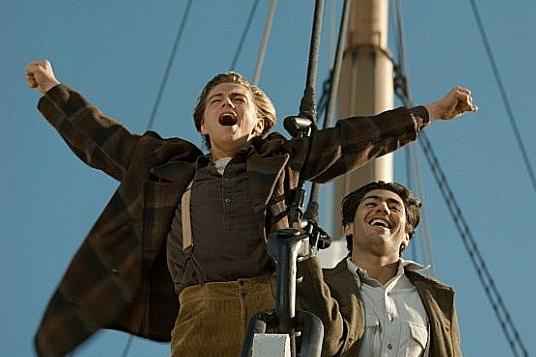 The king of the world is back on the Titanic. So is Rose, now with an added dimension.

TITANIC 3-D: Before James Cameron topped himself with Avatar, this was the biggest money- making movie ever. Most of us have seen it; some many times, so the only question on its return is this: Is the 3D worth it? I’d say, “somewhat.”It’s certainly a very good conversion technically. The depth it creates does add an extra shimmer of life to some scenes, notably the ship’s upright throes, writhing as she protrudes up out of the water and then finally sinks. But it’s still unnecessary. The picture is darker and the glasses are a bother. Cameron says it makes the film more “immersive”. I say its story and special effects were already immersive enough. 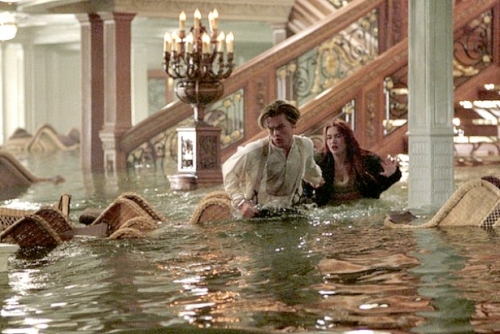 An unhappy young socialite (Kate Winslet) turns away from the impending marriage her mother wants for her and kicks up her heels with a free spirit artist (Leonardo DiCaprio) who’s wandered up from steerage. It’s a love story amid class divisions and, of course, corporate hubris, with one of the most famous human tragedies building inexorably in the background. The story has a universal resonance and the film is a marvel of mainstream movie making. Cameron didn’t tinker much in this re-release, besides rearranging some nighttime stars because an astronomer had complained. There’s a glitch he should have fixed. When the two lovebirds run down a hall ahead of the rushing water they’re clearly not Kate and Leo but a couple of stunt doubles. Of course, that’s really why Titanic is welcomed back. You can see it all on the big screen. (The Park, Scotiabank and suburban theatres)  4 out of 5

AMERICAN REUNION: I can remember sitting in the Oakridge Theatre 13 years ago watching a preview of American Pie and hoping that teenagers wouldn’t take to that movie. It brought a whole new raunchy level to their films. You’ve heard of the sex with a pie scene? Well, they did take to it of course. The raunch was a lark for them; but it was the characters they responded to. Three sequels and four video spin-offs followed. Now a highschool reunion brings the crowd back together, with wild and simple Stifler (Seann William Scott) at the centre of things. 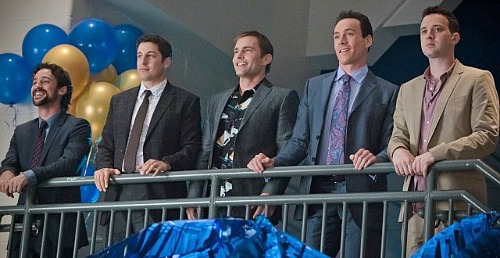 I haven’t seen it but my friend Greg Ursic has and passed along these thoughts.

“It's more of a nostalgia piece than a traditional gross-out comedy:  Jim and Michelle have settled into marital "bliss" (oh the joys of toddler), Stifler is working as a go-fer in a major firm, Finch is now a bohemian world traveler (or is he?), and Oz is a sportscaster with a model for a girlfriend. It is fun to "catch up" with the characters, including Eugene Levy who is now widowed and gets dragged out of his malaise by Stifler's mom … The film boasts a playful - and occasionally rude - sense of humour, that is generally good spirited and often self referential…. there are of course some requisite nude shots - both  male and female. At almost two hours the movie struggles through a several notable flat patches … (but) while Reunion is not as good as its progenitor, it stands out as the strongest of the sequels.  3 out of 5”  (Scotiabank and many suburban theatres)

THE RAID: REDEMPTION: Here’s a treat for action fans. This film, made by a Welshman (Gareth Evans) in Indonesia, highlights an explosive form of martial arts called silat, which is heavy on kicks, knees and elbows. There’s also plenty of other mayhem and not much story to get in the way. After a quiet opening (a prayer, a goodbye to a pregnant wife) and a bit of set-up (an officer’s instructions to a SWAT team) we get over 90 minutes of almost non-stop combat, with guns, rifles, knives, machetes and hand to hand.

Police stage an attack on a Jakarta apartment building to take out a drug lord. Since he’s also landlord to dozens of crooks and drug addicts, he’s got an endless legion of fighters to throw at the cops. These guys come at them from everywhere on every floor. The cops are trapped and have to turn and fight their way back out. It’s exhilarating to watch. The battles are stylishly-directed. The choreography and the camera work are crisp and fluid. The action isn’t confused by frenetic editing. You see what’s going on, much of it pretty brutal. There’s a sub-plot about a crooked cop to add some mystery, a great snarling villain and a new action star. Iko Uwais has real presence and a future in the movies. (Scotiabank and a few suburban theatres) 3 ½ out of 5