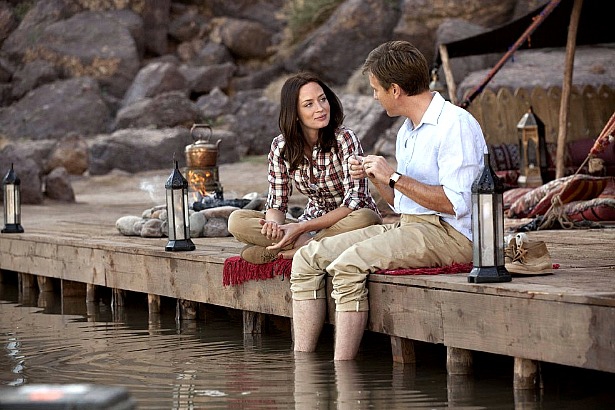 The easy going lure of romance, Ewan McGregor and Emily Blunt in Salmon Fishing in the Yemen

Who says we don’t recognize our own movies here in Canada? The Genies last night did it exactly right. They gave six awards, including most of the top ones, to Monsieur Lazhar. This is an excellent film from Quebec about an immigrant teacher in a school that suffered a tragedy.

It won as best picture and awards for direction, editing, screenwriting and two for acting. Earlier it was nominated for an Oscar. I gave it 4 ½ stars. If you haven’t seen it, you should. It’s showing at the International Village.

This week’s newcomers, however, aren’t as good. Here’s the list.

Salmon Fishing in the Yemen: 3 ½ stars

SALMON FISHING IN THE YEMEN: Here’s an immensely likeable film and, dare I say it, a perfect date movie. It’s part romantic comedy, part political satire (relatively mild) and all intelligent. Unless you’re a fisheries biologist.

Ewan McGregor and Emily Blunt are charming as a couple brought together by a job that shouldn’t make sense. A sheik from Yemen, who lives part-time in Scotland and has become  a fly-fishing enthusiast, wants to bring salmon to his country’s rivers. 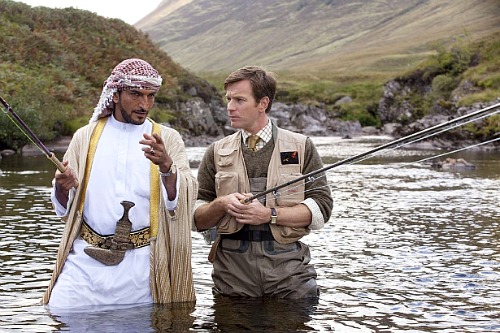 “Fundamentally infeasible,” grumps McGregor over at the Fish and Agriculture Department. Salmon need cold water. Do it, orders Kristin Scott Thomas as a government press officer. Pacific salmon live as far south as California, she says, and anyway because of some unpleasantries in Afghanistan, Britain needs a good news story from the Middle East. Blunt plays the sheik’s investment advisor and compared to McGregor’s “stiff upper lip” describes herself as “more of a gusher.”  In other words, opposites and perfect for a romance, even though both have spouses currently out of the country. We get bright dialogue and a nicely satiric view of bureaucracy. The geo-political expertise, like the biology, isn’t nearly as sharp although there are rebels in Yemen who do make a mess of their plans. (5th Avenue) 3 ½  out of 5

JOHN CARTER: A friend tells me this film does a good and faithful job of putting this old sci-fi fantasy on to the big screen. Unfortunately, these days, that’s not good enough. We need updating as well. Edgar Rice Burroughs published the story over 100 years ago, initially as a magazine serial and then, when he became famous with his Tarzan stories, as the first of a series of novels. His hero travels to the planet Mars, lands in the middle of a civil war that’s been on for 1000 years and rescues a princess from a forced marriage.

Pretty quaint, I’d say. A lot like Flash Gordon and many sword and sandal epics and riddled with questions. How does he get from an Arizona cave to Mars? Why does he meet both English-speaking humanoids and lizard-like creatures with six arms and subtitled speech? How does he learn to understand them? And what’s going oin in this war anyway? The script doesn’t help us much but does fling about exotic names we don’t remember and esoterica about sacred rivers and “ancient rites of moons and water.”  We’re left with an obscure story but great spectacle. 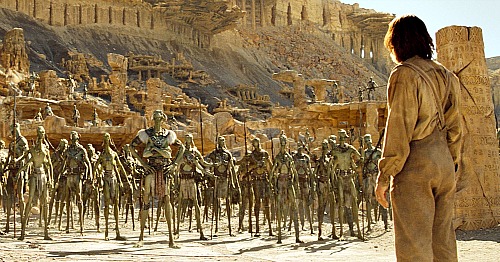 There are desert chases, airship battles and a gladiator showdown with two giant albino apes all ably directed by Andrew Stanton, with the visual sense he honed in his animated films Finding Nemo and Wall-E but a bit short on excitement. Taylor Kitsch (from Kelowna, Coquitlam and TV’s Friday Night Lights) is fine playing Carter as a steely hero with a touch of modern cynicism. Fans of the Rome mini-series will notice Caesar and Mark Antony together again, with Ciarán Hinds and James Purefoy now playing Martians. As for the 3D, it’s not worth the extra money. (Dophin, Scotiabank and many suburban theatres)  3 out of 5