The fact is there’s already so much there. This was the first animated film to be nominated for a best picture Oscar. The drawing and the character movements are detailed and lifelike, although in 3D there’s an infrequent perspective glitch on a character’s head. The story is told with respect for the style and mood of the old fairy tales. There are both warm and scary scenes. The wolves attacking at night would terrify any young child. The heroine Belle is assertive and modern, pursued by the vain Gaston but obliged to find some lovability in the grumpy Beast. The minor characters like Lumiere, Mrs. Potts and Chip are charming and often funny. Celine Dion became famous. She sings the title (and Oscar-winning) song with Peabo Bryson. This is a wonderful film that still stands up today. As a bonus, you get a new cartoon showing what came next after Tangled, the Rapunzel film of two years ago. This is the wedding but when the rings get lost there’s a frantic and very funny quest to find them. (Scotiabank and many suburban theatres)  4 ½ out of 5

THE SWELL SEASON: When we last saw Glen Hansard and Markéta Irglová, they were on TV  accepting an Academy Award for best song. That was from the movie Once, in which he, as a busker in Ireland, and she, as a Czech immigrant, struck up a friendship. This new film is something of a sequel, showing what happened to them in their real life. 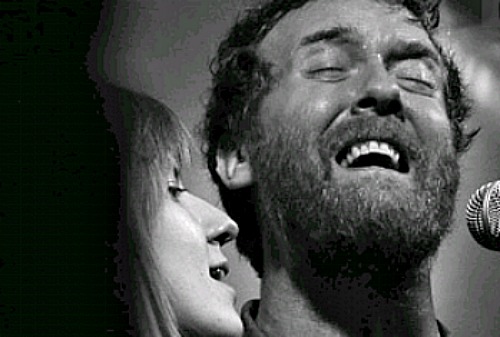 They recorded an album and set out on a concert tour that last about two years and took a toll. They were lovers but with an 18-year age difference and clashing ideas on fame. He had wanted it since he was a teen; she found it oppressive and grew tired of having to meet the fans. “I need to find my own way,” she insists. His mother says he should do something to be in the paper every day and his drunken father is sure his son won the Oscar for him. By contrast, her family is too normal to get much screen time. What we do get is an intimate view of a relationship slowly disintegrating during the American leg of their tour. It’s a captivating progression, from skinny dipping and fun to a breakup one morning over coffee, all caught in crisp black and white and with lots of soulful music. (VanCity Theatre) 3 ½ out of 5

Playing in tandem with ….ANIMATION EXPRESS: 90 minutes of new short films produced by The National Film Board. Locals, Marv Newland and Anne Marie Fleming, have significant works on display, his is a riot of colors and shapes; hers is about a child of Holocaust survivors.

CONTRABAND: There’s implausible action and plot in this blue collar thriller and very little originality. Not that it matters, of course. The audience likely won’t care that this is a remake of an award-winning Icelandic film, directed by the man who starred in and produced it. The new star (and one of the producers) is Mark Wahlberg, comfortably playing himself once again. He’s a family man in this one, with a wife (Kate Beckinsale), two kids, a small business and a criminal past. You know what’s coming. He’s forced back for one last job. 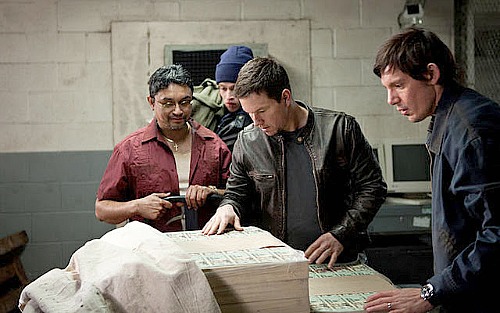 He sets out to smuggle counterfeit money from Panama to New Orleans or a cackling crazy drug dealer (Giovanni Ribisi) will kill his family. Somehow, he also manages to get drawn into an unrelated armored car heist, a major gun battle with police and the theft of a Jackson Pollock painting. Also, somehow, the story manages to stay on track and move along efficiently. A litlle bit of European artiness creeps in, but only a bit. The most interesting scenes show the workings of the big freighters and the Panama Canal. That’s not original, but it’s rare in the movies. (The Dunbar, Scotiabank and many suburban theatres)  2 ½ out of 5

JOYFUL NOISE: I love gospel music but couldn’t be in two theatres at once and missed this one. Lots of reviews on line call the story hokum but praise the music as spirited and crowd-pleasing. The story, that plays out between many songs, puts Queen Latifah and Dolly Parton against each other in shaping up a small town choir for a national competition. Latifah wants to stick with their traditional material; Parton favors pop and country songs. A romantic complication for the younger moviegoers has Dolly’s grandson (Jeremy Jordan) falling for Queen’s daughter (Keke Palmer). Both, of course, also sing up a storm. (International Village and 6 suburban theatres)

SON OF THE SUNSHINE: The First Weekend Club continues its mission of getting Canadian films shown. Next Wednesday, Jan 18, in a new location, The Denman Theatre, they’re bringing  Son of the Sunshine, which has been playing a festivals for almost three years and winning awards at some of them. It has drawn solid praise from papers like the Toronto Star and the Montreal Gazette. 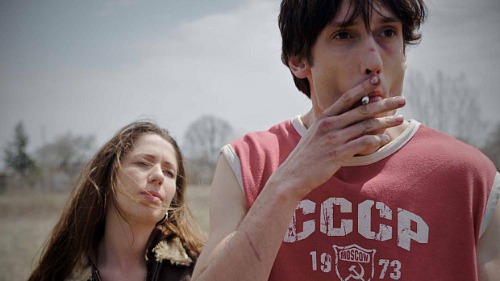 Winnipeg actor Ryan Ward wrote and directed it and stars as a young man with Tourette’s syndrome. The National Post described his portrayal as “uncanny”. He gets a bloody nose on the Toronto subway, is shown as part of a dysfunctional family and has his life changed by some experimental surgery. Life becomes more normal. He gets a job and a girlfriend but he also loses something. You can read more at http://www.firstweekendclub.ca/canada-screens-jan-18-2012-son-of-the-sunshine.html

SAADAT ABAD: One week before the highly anticipated Irani film, A Separation, arrives,  the star’s subsequent film is already here. (Although unpublicized and in only one theatre). Leila Hatami plays a women in the upscale Tehran neighborhood of the title, which means "The place of happiness."  She’s trying to rekindle that feeling with her husband by holding a surprise birthday party. As the guests gather and later at the dinner table tensions build and secrets come out. (Granville Theatre)

NOTE: The images are movie still provided by te studios and are therefore the exclusive property of their copyright owners.