The Artist, Shame, New Year’s Eve, Eye of the Storm, a new Herzog and an old Godard 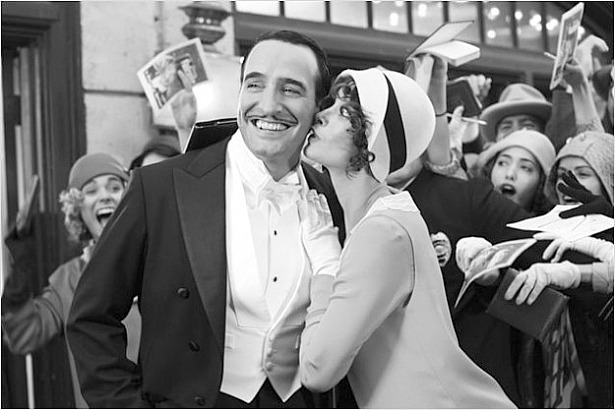 No sound, no color, and yet The Artist is being touted as a best film contender.

My favorite film of the year so far is here. Plus a moody take on sex addiction, a tale of family dysfunction and one overly busy New Year’s Eve. Also a trip into a northern wilderness and a noisy assault on bourgeois society.

THE ARTIST: Finally, it’s here and everyone can see why the buzz has become so immense. It started at Cannes, where the praise was universal and Jean Dujardin won the best actor award. It carried on at other festivals, including Toronto, New York and Vancouver, and is now a serious possibility for a best picture Oscar. The reason is simple. This is the most entertaining movie of the year. And maybe most audacious, because it’s black and white and, except for music, almost totally silent.

It celebrates the magic of the movies with a story that’s not unfamiliar to the fans. Way back, long before 3-D and CGI, as sound was just coming in, some careers collapsed and new stars rose if they could talk and sing. Bérénice Bejo, plays one of these, with a wide smile and the apt name, Peppy Miller. She’s on the way up, while her mentor (Dujardin), a suave swashbuckler who has no use for the talkies, finds the audience deserting him. With James Cromwell as his loyal driver and John Goodman as the studio boss, and actually made in Hollywood by French director Michel Hazanavicius, the film captures the look and feel of the era, and its films, perfectly and with considerable artistry and heart. Dujardin is a treat to watch in both mock film clips and as a preening star playing to the fans off the screen. Just one quibble: scenes of his career dip drag on a little too long and slow down this otherwise zippy film. (5th Avenue, Scotiabank)  4 ½ out of 5

SHAME: Ok, let’s get this out of the way. Yes, Michael Fassbender does let his penis show, but only briefly and quite matter-of-factly. Enough, though, to stir up all that gossip and hype that has almost overshadowed his real achievement—his subtle and entirely believable acting as a man addicted to sex. It won him the best actor award in Venice.

We never do find out, although when his sister says "We're not bad people, we just come from a bad place," it suggests a back story the film doesn’t explore. It prefers to simply watch the present, a series of cheerless sexual encounters that aren’t sexy at all, and  to build a powerful mood of big city angst and desperation. Carey Mulligan is the needy and vulnerable sister who drops in unannounced, and shames him to change. For a while, that is, until he descends deeper into his night-crawling ways.

It’s a raw film, the second one from England’s Steve McQueen, who teamed with Fassbender three years ago for Hunger. This one grabs you just as much but veers off track at the very end with a crisis that may be intended to be cautionary but feels tacked on and entirely extraneous. (International Village) 3 ½ out of 5

NEW YEAR’S EVE: The stars just keep coming. Hilary Swank is in charge of the big celebration in Times Square. Ryan Seacrest will emcee and Jon Bon Jovi will sing. Ashton Kutcher couldn’t care less. He gets trapped in an elevator with Lea Michele (of Glee fame). Robert De Niro cares. He wants to get up from his hospital bed and watch from the roof as the ball drops at midnight. Zac Efron takes Michelle Pfeiffer out for the evening while Abigail Breslin defies her mother Sarah Jessica Parker’s orders to stay in.

There are many more in this compilation organized by Garry Marshall, who created a similar omnibus of stories last year for Valentine’s Day. I didn’t see that one, but this is a contrived collection of minor dramas, riddled with shallow and unconvincing emotions displayed by people crossing paths that one night. (One connection late in the film is just too strange to have any credibility). It’s all presented with a glossy veneer and clearly aimed at the TV generation. Many of the actors are from TV, although there are also has-beens and Oscar winners in the large cast. (The Ridge, International Village and many suburban theatres)  2 out of 5