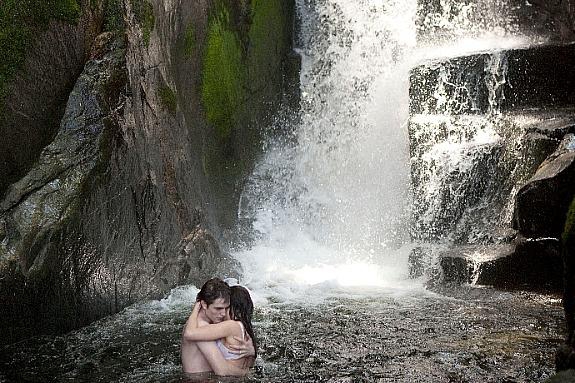 Virgins on the verge no more. Marriage and its aftermath for Edward and Bella in the fourth Twilight film

One film grabs most of the press this week. You might have heard of it. It’s got Twilight in the title. Look further though, there’s another young romance just opened, and another marriage, a depressed one. The dancing penguins are back, Luna the whale is remembered, horses are gently trained and some people dressed up as superheroes are fighting crime.

THE TWILIGHT SAGA: BREAKING DAWN - PART 1: It happened to Harry Potter too. The last book was split in two and part one was dull and slow. At first it didn’t seem it would be that way in this one because less than a minute in Taylor Lautner rips off his shirt and runs out in the rain in anger.

He’s just seen the invitation to Edward and Bella’s wedding and his rage got the better of him. However, we’re denied such intensity for the next 40 minutes or so as the ceremony takes over, from preparation (Bella trying out high heels), to the “I do” moment, mundane speeches at the reception, and a honeymoon in Brazil, in an airy house on a sunny beach. Sunny? For a vampire? Oh, don’t analyze everything.

The young women in the audience will enjoy how well the marriage and first-sex anxieties are presented and let’s concentrate on the real problem. Bella hasn’t been turned yet and sex between a vampire and human is dangerous. It makes Bella pregnant incredibly fast and conceives a baby that threatens her life from her insides. Even worse, it endangers the peace treaty between vampires and werewolves back here in B.C. Uh, make that Forks, Washington. It was only filmed, not set, here.

Lautner comes back to try and salvage the peace as wolves lay siege to the house where Bella (Kristen Stewart) looks deathly ill without makeup and Edward (Robert Pattinson), who looks pale and other-worldly most of the time, rises to the occasion and performs a procedure that’s harrowing and bloody. It’s part of the best 20 minutes in this film and caps the imaginative bits, the hallucinations, dreams, vampire physiology, that new director Bill Condon, an Oscar winner, has worked in. It almost makes up for a lot of silliness that came before. (Four local theatres: Dunbar, Dolphin, Oakridge, Scotiabank, and many in the suburbs)  2 ½ out of 5

LIKE CRAZY: Like a light melody played in a minor key,  this one doesn’t wow you but proves to be comfortably pleasing. And it presents young romance in a far more natural way than just about any romantic drama these days. The film won the top award at Sundance this year.

Anton Yelchin plays a California student who strikes up a relationship with a visiting Brit (Felicity Jones) who wants to be a writer. We get a tender montage of soulful walks, beach lounging and midway rides. But then, when she takes a trip home to England, she isn’t allowed back into the U.S. because she had violated her student visa by overstaying. The couple try a long distance affair which proves wobbly. They even get married but the visa problem remains. We wonder how they can ever get back together when jealousy also creeps in. That’s because they both start sleeping with other partners, he with Jennifer Lawrence, the Oscar nominee of earlier this year. The story is improbable and contrived but the joy-and-heartbreak mood, the improvised dialogue, the couple’s chemistry and Felicity’s acting make it work, if not resoundingly, at least pretty well.   (5th Avenue) 3 out of 5

MELANCHOLIA: When a movie starts with the end of the world, in slow motion and to the music of Wagner, where can it go next? To a flashback, of course, and a visit with some of the little people living below and before this cataclysm. And a richly imagined study of depression.