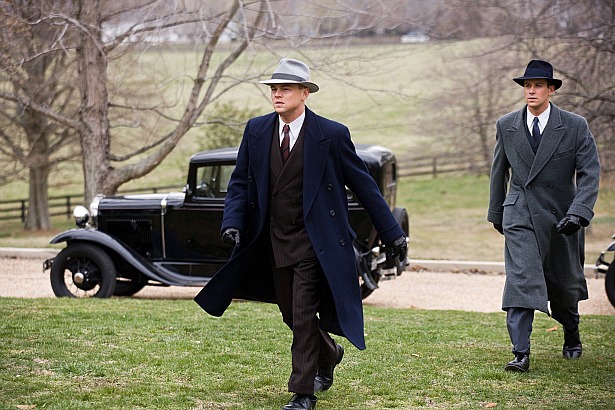 Clint Eastwood and Leonardo DiCaprio give us a different view of J. Edgar Hoover, the long-time FBI boss

My first week back and the theatres are packed with new movies, among them a revisionist portrait of an infamous FBI director, a loose take on Greek mythology and a realistic slam at high finance.

J. EDGAR: Even with Clint Eastwood’s craftsmanship and Leonardo DiCaprio’s fine acting, it’s hard to get much involved with this portrait of America’s former top cop. After all, J. Edgar Hoover was a fastidious little man who lived with his mother until he was forty and was basically a bureaucrat as the long-time head of the FBI. He takes a date (Naomi Watts) on a tour of a library card catalogue. He keeps files on millions of Americans, even presidents who keep re-appointing him in his job. The film is too long and sprawling, and bounces around in time instead of finding a central core to make the man interesting.

There is drama in his life. He develops a life-long fear of anarchists and Communists and organizes the FBI into a modern crime-fighting outfit. But he also takes personal credit for work done by his agents and disregards his own rules when he hires a young man (Armie Hammer) by looks, not merit, to be his assistant. The script by Dustin Lance Black, Oscar winner for Milk, brings out the “longtime companion” rumors about their relationship but gives us only a few glances, some handholding and a short kiss (after a fight) to confirm them. That those rumors made him prey to some Mafia blackmail isn’t even mentioned. There’s far too much on the Lindberg baby kidnapping and almost nothing from the left-right battles of the 1950s and 60s.

The only reason I’m giving it three stars is to recognize the acting and the presentation, including the make up during Hoover’s later years. You’ll be looking closely trying to figure if that’s really DiCaprio in there. (The Park, International Village and suburban theatres) 3 out of 5

IMMORTALS: At this film’s climax there are three battles going on simultaneously, between two armies, between gods and titans and Theseus against an evil king. Until then we’d been getting the occasional head splitting, limb chopping, slow motion blood spurting fight scenes. Now it’s a virtual orgy giving us all of them over and over. Thankfully the mayhem isn’t too graphic and lingering. It’s comic book stuff. Don’t, however, imagine this is Greek mythology. It was written by a couple of Greek-Americans who only adopted a few elements from the old tales. So, Theseus doesn’t found Athens and never fights a minotaur, although one opponent’s headgear does make him look like one.

Henry Cavill, the future Superman, currently filming here in Vancouver, plays Theseus, the mortal Zeus has chosen to stop King Hyperion (played by Mickey Rourke) from conquering Greece. Both men strut and fight with real big-screen presence. Freida Pinto (Slumdog Millionaire) is a virginal oracle who offers Theseus cryptic predictions including where to find a super weapon, a rapid-fire bow and arrow that Hyperion is after. All the while, the gods watch from above. They’re forbidden to get directly involved. It’s hokey stuff but director Tarsem Singh keeps the story moving with great dabs of Joseph Campbell philosophy and a rich visual palette.