Films to see at VIFF on Days 5 & 6: Monday and Tuesday 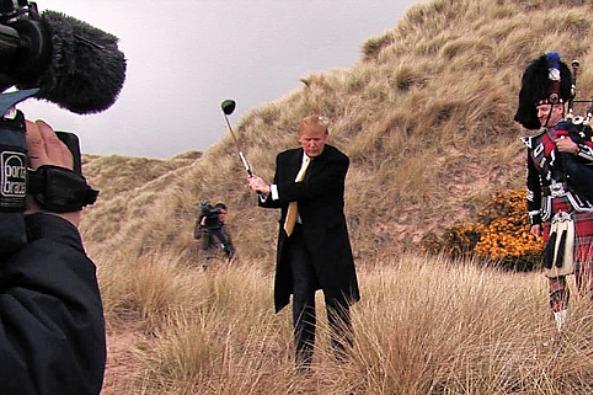 Donald Trump tees off on a new project in Scotland and shows property developers everywhere how it’s done. You’ve Been Trumped is showing at the Vancouver International Film Festival.

Once again, coincidentally, documentaries take more recommendations than fiction these next two days. You can find Donald Trump, Wiebo Ludwig, a battered woman and some African street musicians.

There are dramas too, in new or previous recommendations or arriving with big buzz.

The Water At the End of the World

YOU'VE BEEN TRUMPED: Memo to some of our local property developers. This is how you get things done. You can learn from a master, Donald Trump. He hypes his projects shamelessly, goes over the heads of his opponants to folks who are properly seduced by the promise of money and, most all, bullies the people standing in his way. If you (accidentally?) cut off their water, take your time bringing it back, all in aid of doing it right. If their property lines don't match what your map says, stake out your line and fight theirs. Get the police to help keep the farmers and nature lovers in check. All of this, and much more, happened when The Donald landed in Scotland to build a world class golf course in an ecologically-sensitive area of sand dunes. Giant trucks were suddenly moving the sand around to reshape the contour and also build a berm because, well, golfers don't want to see a bunch of ugly houses. Arrogance is on parade, press conferences are held and critics are dismissed. But they're also heard and seen protesting in this tough documentary by Anthony Baxter. He was arrested at one point during filming and later had a short verbal tangle with great man himself. Compelling and informative stuff. (Tues., Thurs. and Sunday).

WIEBO'S WAR: I had read about Wiebo Ludwig’s battles with oil and gas companies in Alberta but only had a very thin understanding. This film fills it out tremendously, takes us right into his house and may contain an oblique admission of culpability in one incident. Over all though, it refuses to judge; just to illuminate.

Ludwig lives in an intentional community, a religious commune if you will. Two families farm sustainably in the wilderness, distrust atheists and were moved to complain when gas wells suddenly were drilled nearby. Illness, miscarriages and livestock deaths may have resulted from the flaring of sour gas into the air. They could set their tap water on fire but “an endless pile of letters” brought help from nobody. Ludwig explains, in some testy interviews, that he was forced to go to war with the drillers. That was back in the 1990s and landed him in jail for about a year and a half.  Home videos of the RCMP taken by Ludwig’s son help tell that story. Last year, when David York made this film, Wiebo was stirred up again. The latest and closest gas well was a threat to the water supply. Even as it refuses to praise or blame, this is a potent documentary. (Also screens Thursday)

BENDA BILILI: It's too easy. How can you go wrong with a documentary about street musicians from Kinshasa in the Congo, many of whom are disabled or paraplegic, who become famous on a big tour of Europe? It's so inspirational, they'll all say. Well, it is, even though it doesn't work at it. This film is a straightforward encounter with some interesting people doing the best they can, and being rewarded for it. Instead of disability, it dwells on hope.