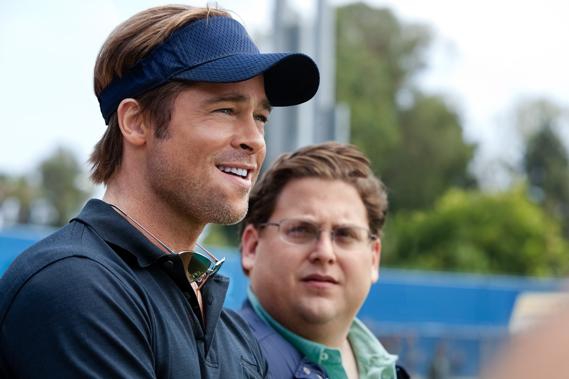 Brad Pitt and Jonah Hill in Moneyball play a manager and a computer whiz who change baseball.

A baseball movie with Oscar hopes, a new turf for Taylor Lautner and a dolphin that needs an artificial fin lead off a long list of new movies this week.

MONEYBALL: Here’s a baseball film with a difference. It has almost no baseball in it. And with Brad Pitt in the lead, that could make it work for non-sport fans too. It deals with the business side. The theme here is how to win over the naysayers and get things done. Pitt plays Billy Beane, the Oakland A’s general manager, who built a winning team without much money to buy players. The Yankees spent three times as much. A young economist and computer geek, played by Jonah Hill, showed him how to find cheap players who could produce. Don’t key on batting averages, for instance. Check how often the player gets on base, no matter how he does it.

It takes work to push these ideas. Philip Seymour Hoffman, as the on-field manager, was a grumpy resister. The scouting staff, in a couple of bristling meetings, are offended that Beane doesn’t listen to their recommendations based as they are on the familiar ways they’ve always followed. These scenes are alive with tension. There’s also an authentic feel when Pitt gets on the phone making deals. The film was written by Aaron Sorkin, who won an Oscar for his last screenplay, The Social Network, another crackling entertainment from an arcane milieu. This film will have you hanging on to every point in arguments you never imagined you’d be interested in. Who hasn’t wanted to take on the stick-in-the-mud slugs at one time or another? Top notch acting and smooth direction by Bennett Miller, who’s last film was Capote, makes this one a winner. (5th Avenue, Dunbar, Scotiabank and many suburban theatres) 4 out of 5

ABDUCTION: Twilight’s Taylor Lautner branches out with this conspiracy thriller that starts off well, draws you into a mystery and then falters trying to keep the various story elements making sense. He’s a high school kid again, with parents he doesn’t understand and a recurring dream about an entirely different woman. When he’s assigned a class project, along with the school cutie (Lily Collins), on missing children, he finds his own face on a website. That stirs up a CIA agent (Alfred Molina) and a European freelancer (Michael Nyqvist of the original The Girl With the Dragon Tattoo) to give chase. By car, on a train, on a river, down a ravine, through the woods and through a couple of U.S. cities.

Taylor and Lily make a good looking pair on the run and have a prolonged kissing scene that oozes sexy vibes. Their acting is weak, though. The better work is left to the old hands, including Sigourney Weaver who shows up briefly to help out and cautions the couple about who they should not trust. The film misses the chance to build on that tension and plays out its standard chase and shoot story with more holes than thrills. (Scotiabank and many suburban theatres) 2 ½ out of 5

DOLPHIN TALE 3-D: This is a wonderful family film, for boys especially. They’ll respond to the young boy in the story as he learns about the world and grows to come out of his funk and care about others. The main other is an injured dolphin who’s tail fins got tangled in a crab trap and had to be amputated.

The boy, played by Sawyer Nelson, develops a close bond with the animal and in one euphoric sequence swims with it, in and under the water. To save the animal’s life, he imagines a prosthetic fin and leans on a technician, played by Morgan Freeman, to develop one. The story is largely true. It happened in a Florida animal rescue facility that was itself rescued from its money problems when the dolphin became famous. The real animal, named Winter, plays herself in the film. She became a favorite with children who have to wear artificial limbs. That angle is overdone in the film as the boy (a fictional addition to the story) also has a big brother who comes back from Iraq partially disabled. However, the actors, including Harry Connick Jr., Kris Kristofferson and young Cozi Zuehlsdorff, and the director, Vancouver’s Charles Martin Smith, keep the film bright and good-hearted in feel-good waters. (Oakridge, International Village, The Dolphin, naturally, and suburban theatres) 3 out of 5

HIGHER GROUND: Religious faith rarely gets as sympathetic a treatment as this in the movies. Mocking or pushing an evangelical agenda is easy. Examining what motivates believers and what brings on a crisis of faith is much harder. This film is based on a personal memoir, This Dark World, by Carolyn Briggs, and by treating it with respect, shows one woman’s struggle credibly and subtly.