Contagion, Warrior, Gainsbourg, The Interrupters vs. gang violence and a restored masterpiece 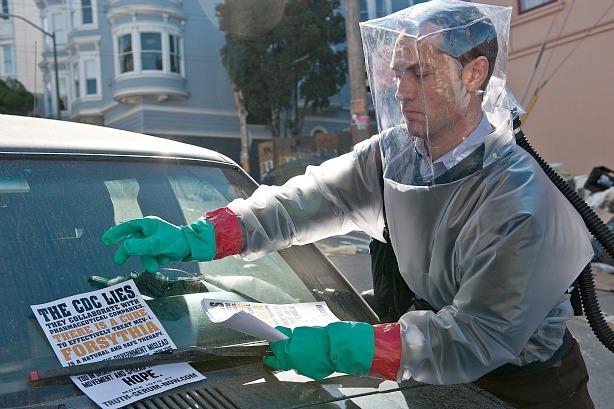 A virus is spreading. Health authorities are stymied. A noisy critic insists he knows better as Contagion taps into some real modern fears.

Bucky Larson: Born to Be a Star:

CONTAGION: You’ll probably find this film has more effect on you after you’ve seen it and think about what it’s saying. While you’re watching it, as a virus spreads and kills, you’ll be looking for gripping suspense. That hardly ever materializes although there are short spells of it when people start looting the supermarkets. What you do get is almost documentary realism showing what happens when nasties like SARS or H1N1 come around. It generates a feeling of unease, more than tension.

Laurence Fishburne (interviewed by Dr. Sanjay Gupta in one sequence), Kate Winslet, Marion Cottillard and Elliott Gould portray health officials who try to find where a new bug came from, how to grow more and develop a vaccine. That’s all scientifically accurate and quite detailed, especially the steps to trace it back to its origins. All they know is that one woman (Gwyneth Paltrow) died of it after flying back from Hong Kong through Chicago. Everything and everyone she touched has to be traced. Her son also dies but her husband (Matt Damon) seems to be immune. Not much is made of that, but it does keep him alive.

Director Stephen Soderbergh takes us through the days as the infection spreads, people clamor for protection and public order breaks down. All the while, a blogger (Jude Law) charges the medical establishment and the drug companies are hiding the truth. There’s a simple and cheap homeopathic solution, he tells the media who are perfectly willing to quote him. There are too many characters to get much involved with their personal stories, and a plodding pace at times. But the view inside the disease control efforts and the account of how fragile society really is delivers enough information to scare people. (The Ridge, Oakridge, Scotiabank and many suburban theatres)     3 out of 5

WARRIOR: The plot feels like you’ve seen it before. In a dozen boxing movies maybe. But, as you know, you can hang a lot of different ideas into one of those. Gavin O'Connor has switched the sport to the more vicious mixed martial arts and envisioned an epic, practically operatic in intensity, with allusions to Moby Dick and Ode to Joy playing to pump up the grand spectacle. Come back down though. It’s still just a boxing movie, dressed up differently.

Tom Hardy and Joel Edgerton play brothers in the hard-scrabble steel town Philadelphia. Tom is an Iraq vet with a painful secret. His bother is a physics teacher strapped for money. An MMA tournament is coming to town, bringing top fighters like Koba, the Russian and an attractive purse. What a surprise. Both brothers enter and after much squabbling over incidents in their family history face each other in a big momentous final. The hammer and sickle-wearing Russian was dispatched pretty easily.

Nick Nolte is the real centre in this rousing film. He’s the boys’ father and trainer to one. Both hate him for the alcohol-driven abuse he used to inflict on their mother. Nolte gives a poignant and subtle performance as a man who has to be talked into trying for another chance. He also gives a perfect précis of Moby Dick when, in a delirious rage he yells out “Ahab, you godless son of a bitch.”  The whole film has that kind of fist-pumping fervor. (Scotiabank and suburban theatres)  3  out of 5

GAINSBOURG: I hadn’t realized how big a star Serge Gainsbourg was in France. I was only aware of the one hit record that got over this far, the heavy-breathing bit of erotica called "Je t'aime… moi non plus." This bio-pic fills in more of the picture. Not all. Although it includes many songs, the film is sketchy on his career and is hardly ever clear on who he’s married to. It prefers to concentrate on his sex-drive and the many other women he bedded. Well, why not, when the list includes Juliette Greco, Françoise Hardy and Brigitte Bardot, played here perfectly by model-turned-actress Laetitia Casta.