Hope and concern at VIFF: the film festival announces its 30th season 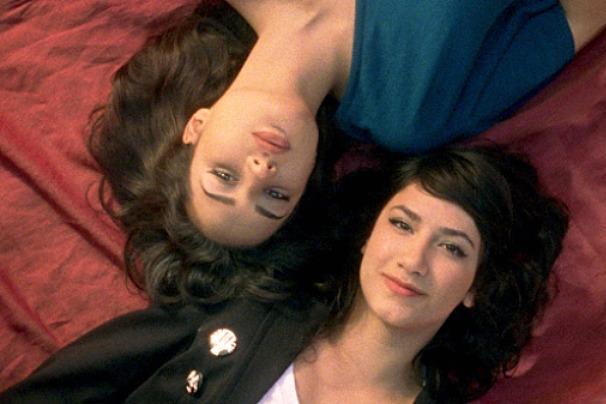 Nikohl Boosheri and Sarah Kazemy play teens pushing back at Iran's rigid rules in Circumstance. The film is coming to VIFF, which has revealled most of its 30th season line up.

Nikohl Boosheri seemed to take it all in stride when she was introduced in the audience at The Vancouver International Film Festival's annual press conference Wednesday. But hers is the best story I heard there.

She's 23, lives in Port Moody and has been in theatre around here for several years. Only one as a professional, though.

Now she's the lead in Circumstance, an international film coming to VIFF, after making a splash at Sundance, gaining terrific reviews in the U.S. and winning her a couple of acting awards at festivals.

She told me getting the part was a surprise and a longshot. Her agent noticed the producers were holding auditions in major cities but not Vancouver. She sent them a tape and a year later, Nikohl was in Beruit, Lebanon, speaking Farsi in a tale of rebellious youth, family tensions and a bit of lesbianism in Iran.

Gabrielle Rose is another proud one. She's acting in three films at VIFF this year, two features and a short.

They were made almost back to back. When she finished one, she was on set for the next one, she told me.

"A great year," she agreed.

The press conference had the usual upbeat message about the over 370 films showing this year. More than 80 are Canadian and documentary, Asian and environmental films are again given special emphasis.

But there was also something missing. There aren't the big films, the ones other festivals, like Toronto, Telluride, New York and London have been trumpeting.

Festival Director Alan Franey described VIFF as "a cornucopia of the world's best films as well as a place of discovery".
In other words, look for the gems among the lesser-known films.

Sarah Polley's new one, "Take this Waltz" starring Michelle Williams and Seth Rogen, might be one of those. It opens the Canadian images section.

There's a new one from Agnieszka Holland, the Polish director. "Darkness" is a recent addition. It's not listed in the sneak preview flyer now widely available.

There's a very strong documentary, Give up Tomorrow, about a miscarriage of justice in the Phillipines and one showing how Donald Trump operates as a developer. You've Been Trumped will really get your blood heated up. A new film about Iceland's trippy rock goup, Sigur Ros, will also get the blood moving, but in a better way.

Two of the highlighted gala films were announced: The Kid with a Bike, by Belgium's Dardenne brothers will be the closer and Starbuck, a Canadian comedy about a mix-up at a sperm-donor lab, will play midway.

It was not yet known what film gets the coveted opening gala spot. That event is back at the Vogue Theatre this year and technical reasons may keep the preferred candidate from screening there.

Another change: no films showing at The Park or The Ridge this year, thereby eliminating any need for a frantic rush between screenings there and downtown.

Also, you'll have a better idea how hard or easy it will be to get tickets. Franey said there will be a red-yellow-green system, like a traffic light, to show hard, moderate or easy for each film. Most screenings are not sold out, he says.

Franey was also upbeat about VIFF's finances. It's been a couple of years since the festival lost its $85,000 lottery grant. He says they've managed to carry one so far by cutting costs and there's some hope the grant will return.

Trish McGrath, VIFF's development director, announced a couple of new initiatives to bring in money and help cover the loss. Fans can donate $30 to mark the festival's 30th year and win a prize and or donate $1,000 and get their name on a plaque on the back of a seat in the VanCity Theatre.

On the industry side, the 5-day Forum also has much that's financial to talk about. How to adapt to the changing market. How to live with the high Canadian dollar and the coming end of the HST.

Director Catherine Hardwicke and producer Lee Aronsohn (he created TV's Three and  Half Men) are among the guests who will be talking about their craft.

The full film schedule is to be on line (at http://www.viff.org/) on Saturday (the same day ticket sales start) and available as a catalogue on Sept 17. The festival runs from Sept 29 to October 14.