One Day, Terri, Fright Night, Spy Kids 4, The Help upgraded, a flashy car racer and one of the funniest films ever 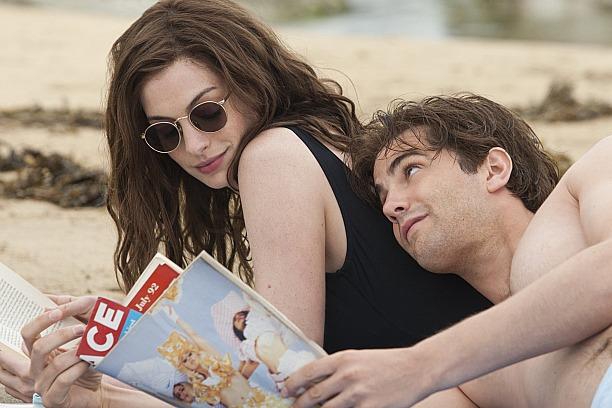 They had their chances but for 20 years these two could-be lovers missed one opportunity after another. Anne Hathaway and Jim Sturgess star in One Day.

Love delayed. Conflicting personalities. That’s on view in the big title this week. Elsewhere we get a high school misfit, a new pair of Spy Kids, a new vampire in town and a tragic end for a great driver.

ONE DAY: You like the two people in this British romance so much, and you want them to get together, but you have to sit through 20 years for … I can’t say, but readers of the best-selling novel know. It’s the long time it takes for them to get together that’s so frustrating. We can see right from the beginning that they’re meant for each other.

They do to, but he (Jim Sturgess) is too cocky to notice and she (Anne Hathaway) is not self-assured enough to do anything to push it. That contrast in their personalities has a strong resonance with many people, maybe more strongly in the book though, than in this film. Here the story eventually gets a bit too languid as it checks in with them on the same day, July 15, every year for two decades. Day one is at their university graduation after which they take different trajectories. He becomes a TV star and a hedonist, wears out his welcome and is tabbed  “the most annoying man on the telly”. He drinks heavily, loses his show, gains a wife and child, and falls to working in a restaurant. She starts in a restaurant, turns to teaching, gets a boyfriend she doesn’t like and works at becoming a writer. Her novel is called “Julie Driscoll versus the World,” a concise reflection of her own still-weak self-confidence. Along the way, there’s a very sexy encounter in a swimming pool but also years of teasing only. When the denouement comes, it feels too convenient as a story device. David Nicholls wrote the film from his own novel and director Lone Scherfig (An Education) was clever in putting the pieces and the years together. It’s not one of the great romances but better than most of the ones coming around these days. (5th Avenue, International Village, many suburban theatres)  3  out of 5

TERRI: There have been many films about outsiders in high school. This is a particularly observant and truthful one. It’s not sentimental or violent; just real. At its centre is an overweight teen who’s picked on at school, humiliated in gym class and sent to the vice-principal’s office far too regularly. Other kids call him one of the “monsters” and he’s lost and adrift enough to believe it.

Jacob Wysocki, who was in the short-lived TV series Huge, plays him as a loner with a good heart but no social skills. John C. Reilly has a perfect role as the vice-principal who tries to help him, with a buddy-buddy approach most of the time and occasional stern advice. Two other teens he counsels, a rebel boy and a low-self-esteem girl, become Terri’s friends, particularly on one evening of pill-popping and uneasy shifts in their relationship. It’s like a John Hughes film hurtled into today’s world. For all its earnest content, the film is remarkably light, spontaneous and easy to take and best of all, as you watch you just never know  what’s going to happen. (5th Avenue Cinemas) 3 ½ out of 5