Cowboys & Aliens, The Trip, Project Nim, The Smurfs, Werner Herzog in a cave in 3D, and more 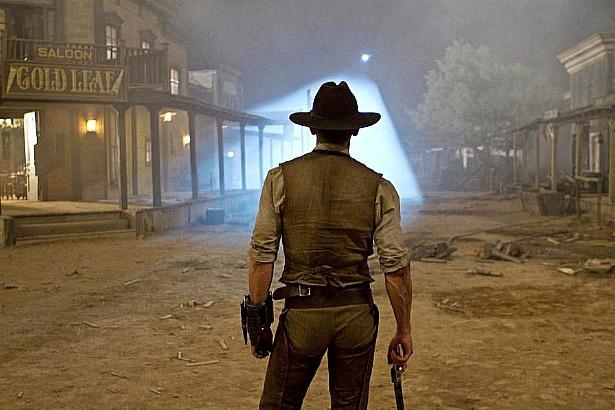 Science fiction mashes up with the western in Cowboys & Aliens.

There are so many new films this week, I haven’t been able to catch them all. There’s Daniel Craig in a western, Werner Herzog in a cave in 3D, Steve Coogan having dinner, a chimp treated like a human being, Smurfs in New York and three artists encountering tragedy.

Phil Ochs: There but for Fortune   4

COWBOYS & ALIENS: Some critics predicted this might be a guilty pleasure, “wry but spry” or at worst, an interesting train wreck. It is none of those. This movie is a bore. That’s after a promising start as Daniel Craig wakes up with a metal device on his wrist, a wound on his side and no memory. He wanders into a town called Absolution, which suggests we’re in for an allegory with a Biblical subtext. No such thing develops. The story, from a graphic novel, a comic book if you will, is all surface with no wider meaning. It’s simply a chance to put two genres together as a novelty.

Stock western characters (Harrison Ford as a gruff rancher, Paul Dano as his crazy-wild son, Sam Rockwell as a meek shopkeeper) suffer attacks by flying machines from outer space. Some are taken away into a mother ship for experiments by slimy creatures who apparently are really after gold. Olivia Wilde is also an alien, although she is on the cowboy side in this story. It makes little sense, because not much is explained, and there’s little tension although you get lots of noisy action. Quite a few horror movies have been set in the old west. This one shows why mash-ups of sci fi and the western are almost never done. (Oakridge, Rio, Scotiabank, suburban theatres) 2 out of 5

THE TRIP: Steve Coogan and Rob Brydon are together again with director Michael Winterbottom for this big helping of apparently improvised wit served up absolutely dry and hilarious. Last time, 6 years ago, they made the Tristam Shandy movie which included a very funny scene in which the two comedians tried to outdo each other with their Al Pacino impressions. There at it again. This time they add Richard Burton, Anthony Hopkins, Christopher Lee (“Come come Mr. Bond. You enjoy killing as much as I do”) and most notably Michael Caine (“You were only supposed to blow the doors off”.)

Ostensibly they’re touring Northern England to review restaurants which brings us a bit of local scenery and a lot of back and forth banter (and needling) over dinner. Brydon is ever cheerful. Coogan always looks a little concerned, appropriately so because he’s on the phone now and then to his American agent or his girlfriend and not hearing much that’s encouraging from them. It’s fiction but also a riff on his real life and career. In his dreams, Ben Stiller is anxious to work with him but a newspaper prints a vile headline about him. The humor is biting, understated and ironic. The movie is low-key and a bit choppy, understandably so since it’s edited down from a six-part BBC-TV series. (5th Avenue Cinemas) 3 ½ out of 5

PROJECT NIM: This is real science as high drama—and tragedy. Curiosity drives an experiment but hubris undoes it. Or maybe it was a hard bit of reality. In 1973, a new-born chimp was forcibly taken from its mother and put with a human mother, to raise like one of her own. Nim, as he was called, might add a new spin to the nature-nurture debate and if he was taught sign language might be able to communicate his thoughts. That was the hypothesis of a Columbia University professor but that was not the result.