Captain America, Friends with Benefits, Life Above All and portraits of an Eco-Pirate and a paranoid chess master 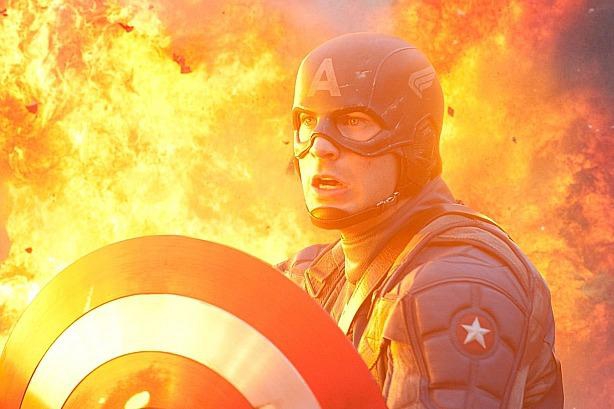 Fire and action, explosions and major stunts. Now if only Captain America had more dramatic punch …

Comic  book nostalgia and contemporary hook-ups drive the two highest profile movies this week. There’s also some hard watching from China and South Africa, if you can take it, and two controversial mavericks to meet.

Bobby Fischer Against the World:  4

CAPTAIN AMERICA: THE FIRST AVENGER: Ready for yet another comic book movie? This is the fourth one in just three months and the good news is: it’s fun. Not pompous or dopey as these films get. This one comes on with a light bounce and a perfectly-realized 1940’s retro look.

Director Joe Johnston, who long ago shrunk the kids, honey, and successfully dipped into the past in the underrated The Rocketeer,  keeps things moving at a breezy clip in this World War II fantasy. There’s lots of action, in both mammoth and small sequences, but also solid acting by a pack of reliables: Stanley Tucci, Hugo Weaving (both putting on respectable German accents), Tommy Lee Jones and Hayley Atwell, among them. That helps cover over the rather bland work by Chris Evans as the scrawny kid who’s pumped up with an experimental growth hormone into a solid fighting man but a dramatic dud. He’s stuck, for a while, in a bond-selling stage show which is colorful but not quite as funny as intended. Weaving is the standout  here as the rogue Nazi known as Red Skull. He even has his own salute: “Heil Hydra.” How rogue is that? There are echoes of Raiders of the Lost Ark and more U.S. military jingoism than is fashionable these days but good use of 3-D. (Scotiabank and many suburban theatres)  3 out of 5

FRIENDS WITH BENEFITS: Justin Timberlake thinks this is the milestone romantic comedy for today’s generation. In the same class as Annie Hall or When Harry Met Sally in years past. I don’t see that it’ll have that kind of staying power but it is enjoyable while it lasts, totally up to date, candid about sex and packed with snappy dialogue, often on the raunchy side. Best of all, Justin and Mila Kunis make an extremely likeable couple, in or out of bed.

In bed, they’re also the most chatty couple you can imagine as they give detailed instructions to each other about what they like done and how they like it. Their first sex scene is very funny. Visually modest, though. She describes him as “emotionally unavailable” and herself as emotionally damaged”. So why complicate things with love; just go for the sex. But, in a reverse of the question Harry and Sally grappled with, they explore whether they can keep love out of it. Or more correctly, as you can probably imagine, how long. There’s some very smart writing on the way to the answer, plus funny supporting roles by Woody Harrelson as a gay colleague at work and Patricia Clarkson as a mother who’s still a hippie free spirit. The mood is almost blown when a father with Alzheimer’s (Richard Jenkins) is brought in. Part of his story was necessary to advance the plot, but not the dementia. It feels like an ill-advised attempt to show how contemporary the film is. The chemistry between Justin and Mila already does that. (International Village and several suburban theatres). 3 ½ out of 5